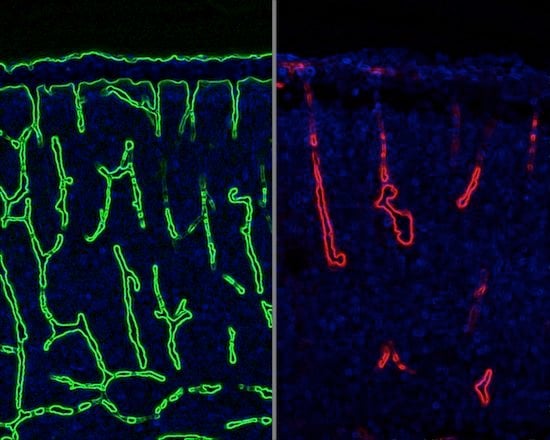 In a study that demonstrates a close connection between the development of brain cells and blood vessels, blood vessels (green) grow normally in a developing mouse brain on left. On right, blood vessels (red) have collapsed in mice with a defective gene in glial cells, which support the growth of the neurons that carry nerve signals. The research, by Zhen Huang, a neuroscientist at the University of Wisconsin–Madison, shows how developing neural cells control the growth of blood vessels. The image is credited to Zhen Huang.
Home
Featured

Zhen Huang freely admits he was not interested in blood vessels four years ago when he was studying brain development in a fetal mouse.

Instead, he wanted to see how changing a particular gene in brain cells called glia would affect the growth of neurons.

The result was hemorrhage, caused by deteriorating veins and arteries, and it begged for explanation.

“It was a surprising finding,” says Huang, an assistant professor of neuroscience and neurology at the University of Wisconsin-Madison. “I was mainly interested in the neurological aspect, how the brain develops and wires itself to prepare for all the wonderful things it does.”

But chance favors the prepared mind, as Louis Pasteur said, and Huang knew he needed to follow up on the suggestion that glia, normally considered “helpers” for the neurons, would affect the growth of blood vessels. For one thing, blood flow is a big deal in the brain, says Huang, whose collaborators included Shang Ma, in the graduate program in cellular and molecular biology at UW-Madison. “We know the brain is very energy-intensive. Per unit of volume, it consumes 10 times as much oxygen as the rest of the body.”

Although it makes intuitive sense that blood vessel development should be guided by neuronal development in some fashion, Huang spent years making sure he wasn’t being mislead by his experiment. Now, he’s satisfied himself, and his scientific reviewers, and the journal PLOS Biology has just published his study.

Glial cells in the nervous system establish a nurturing environment for neurons but do not carry signals. In particular, Huang looked at “radial glial cells,” which also act as stem cells in creating new neurons. Radial glia extend from the inside of the brain to the outside, and also guide growing neurons to their final locations.

A standard way to find out what cells and genes do is to “knock out” specific genes, using a technology invented at UW-Madison by former professor Oliver Smithies (who shared the 2010 Nobel Prize for this discovery).

When Huang grew mice with a “knock out” mutation that blocked cell division among the radial glia, he expected to see abnormalities in the embryonic brain. But the major abnormality was completely unexpected: blood vessels that had already formed had collapsed.

New blood vessels in an embryo generally develop via a two-step process, first growing, and then stabilizing. “If the second step cannot be carried out, the vessels may already be formed, but the organ still cannot get its blood supply because the vessel will regress, or collapse,” Huang says.

When blood vessels collapse, neurons start to die, says Huang. Some brain diseases, including Alzheimer’s and hemorrhagic stroke, show a similar regression, and Huang says it’s possible that the signaling mechanism that he experimentally blocked may play a role in these diseases as well.

Although any clinical treatment is years away, Huang is still basking in the thrill of basic discovery.

“We find that these progenitor and helper cells, the radial glia, regulate blood vessel development, and nobody has found that before.” Huang says. “We used a mouse with alterations in genetics that regulate activity in these helper cells in the brain, and were very surprised to see that this had a drastic effect on blood vessel development. Previously it was always thought that these were two separate systems, now we know there is crosstalk between them. It’s almost like a new field has opened up.”