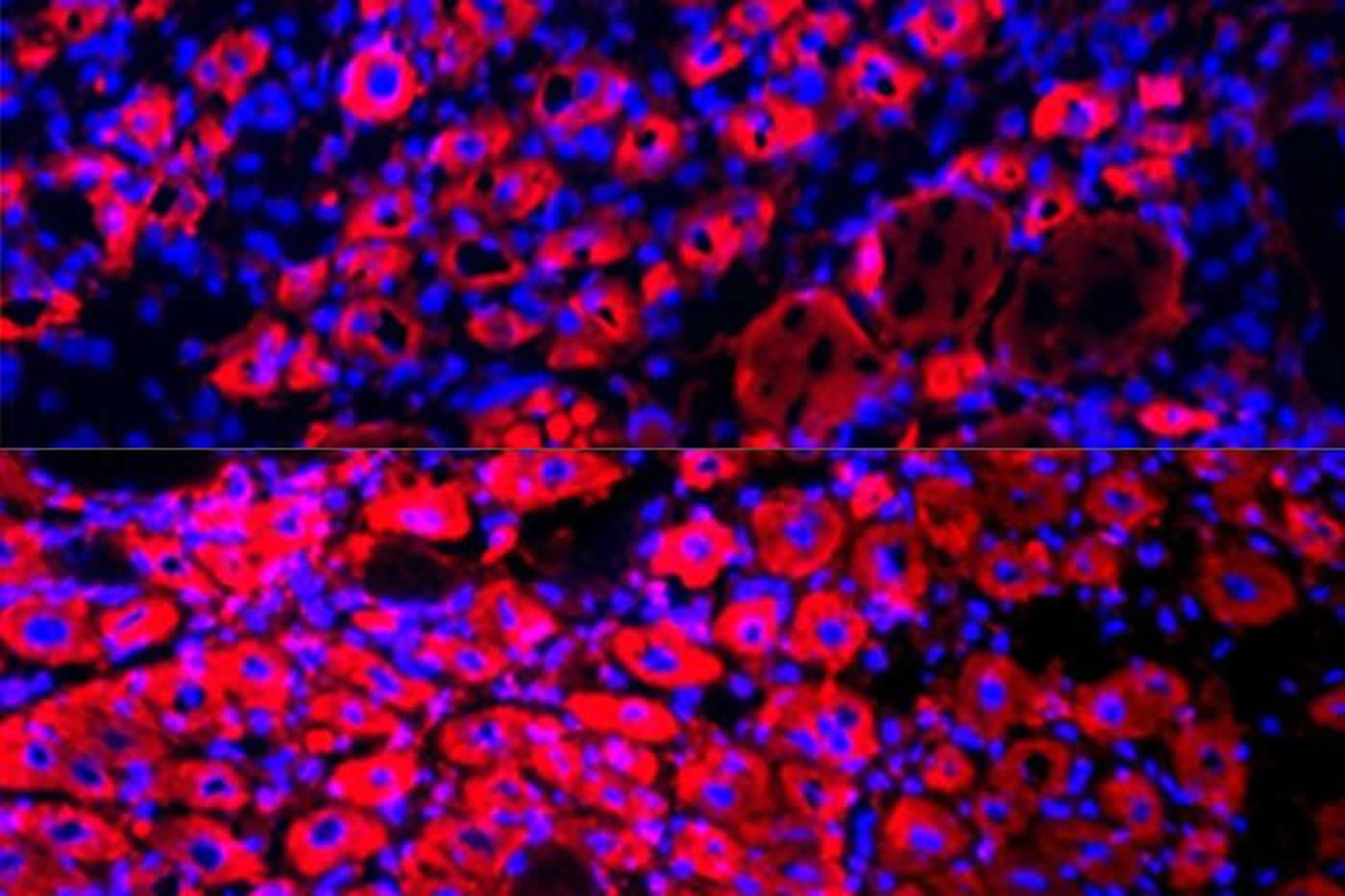 A new study by University of California, Berkeley, found that older mice grew significantly more new muscle fibers, shown as pink "donut" shapes, after undergoing a procedure that effectively diluted the proteins in their blood plasma (bottom) than they did before they underwent the procedure (top). The research team is currently finalizing clinical trials to determine if a modified plasma exchange in humans could be used to treat age-associated diseases and improve the overall health of older people. Image is credited to Irina Conboy.

Summary: Diluting the blood plasma of older mice has a stronger rejuvenating effect on the brain, liver, and muscles than transplanting the blood of younger mice.

In 2005, University of California, Berkeley, researchers made the surprising discovery that making conjoined twins out of young and old mice — such that they share blood and organs — can rejuvenate tissues and reverse the signs of aging in the old mice. The finding sparked a flurry of research into whether a youngster’s blood might contain special proteins or molecules that could serve as a “fountain of youth” for mice and humans alike.

But a new study by the same team shows that similar age-reversing effects can be achieved by simply diluting the blood plasma of old mice — no young blood needed.

In the study, the team found that replacing half of the blood plasma of old mice with a mixture of saline and albumin — where the albumin simply replaces protein that was lost when the original blood plasma was removed — has the same or stronger rejuvenation effects on the brain, liver and muscle than pairing with young mice or young blood exchange. Performing the same procedure on young mice had no detrimental effects on their health.

This discovery shifts the dominant model of rejuvenation away from young blood and toward the benefits of removing age-elevated, and potentially harmful, factors in old blood.

“There are two main interpretations of our original experiments: The first is that, in the mouse joining experiments, rejuvenation was due to young blood and young proteins or factors that become diminished with aging, but an equally possible alternative is that, with age, you have an elevation of certain proteins in the blood that become detrimental, and these were removed or neutralized by the young partners,” said Irina Conboy, a professor of bioengineering at UC Berkeley who is the first author of the 2005 mouse-joining paper and senior author of the new study. “As our science shows, the second interpretation turns out to be correct. Young blood or factors are not needed for the rejuvenating effect; dilution of old blood is sufficient.”

In humans, the composition of blood plasma can be altered in a clinical procedure called therapeutic plasma exchange, or plasmapheresis, which is currently FDA-approved in the U.S. for treating a variety of autoimmune diseases. The research team is currently finalizing clinical trials to determine if a modified plasma exchange in humans could be used to improve the overall health of older people and to treat age-associated diseases that include muscle wasting, neuro-degeneration, Type 2 diabetes and immune deregulation.

“I think it will take some time for people to really give up the idea that that young plasma contains rejuvenation molecules, or silver bullets, for aging,” said Dobri Kiprov, a medical director of Apheresis Care Group and a co-author of the paper. “I hope our results open the door for further research into using plasma exchange — not just for aging, but also for immunomodulation.”

The study appears online in the journal Aging.

In the early 2000s, Conboy and her husband and research partner Michael Conboy, a senior researcher and lecturer in the Department of Bioengineering at UC Berkeley and co-author of the new study, had a hunch that our body’s ability to regenerate damaged tissue remains with us into old age in the form of stem cells, but that somehow these cells get turned off through changes in our biochemistry as we age.

“We had the idea that aging might be really more dynamic than people think,” Conboy said. “We thought that it could be caused by transient and very reversible declines in regeneration, such that, even if somebody is very old, the capacity to build new tissues in organs could be restored to young levels by basically replacing the broken cells and tissues with healthy ones, and that this capacity is regulated through specific chemicals which change with age in ways that become counterproductive.”

After the Conboys published their groundbreaking 2005 work, showing that making conjoined twins from the old mouse and a young mouse reversed many signs of aging in the older mouse, many researchers seized on the idea that specific proteins in young blood could be the key to unlocking the body’s latent regeneration abilities.

However, in the original report, and in a more recent study, when blood was exchanged between young and old animals without physically joining them, young animals showed signs of aging. These results indicated that that young blood circulating through young veins could not compete with old blood.

As a result, the Conboys pursued the idea that a buildup of certain proteins with age is the main inhibitor of tissue maintenance and repair, and that diluting these proteins with blood exchange could also be the mechanism behind the original results. If true, this would suggest an alternative, safer path to successful clinical intervention: Instead of adding proteins from young blood, which could do harm to a patient, the dilution of age-elevated proteins could be therapeutic, while also allowing for the increase of young proteins by removing factors that could suppress them.

To test this hypothesis, the Conboys and their colleagues came up with the idea of performing “neutral” blood exchange. Instead of exchanging the blood of a mouse with that of a younger or an older animal, they would simply dilute the blood plasma by swapping out part of the animal’s blood plasma with a solution containing plasma’s most basic ingredients: saline and a protein called albumin. The albumin included in the solution simply replenished this abundant protein, which is needed for overall biophysical and biochemical blood health and was lost when half the plasma was removed.

After finding that the neutral blood exchange significantly improved the health of old mice, the team conducted a proteomic analysis of the blood plasma of the animals to find out how the proteins in their blood changed following the procedure. The researchers performed a similar analysis on blood plasma from humans who had undergone therapeutic plasma exchange.

They found that the plasma exchange process acts almost like a molecular reset button, lowering the concentrations of a number of pro-inflammatory proteins that become elevated with age, while allowing more beneficial proteins, like those that promote vascularization, to rebound in large numbers.

“A few of these proteins are of particular interest, and in the future, we may look at them as additional therapeutic and drug candidates,” Conboy said. “But I would warn against silver bullets. It is very unlikely that aging could be reversed by changes in any one protein. In our experiment, we found that we can do one procedure that is relatively simple and FDA-approved, yet it simultaneously changed levels of numerous proteins in the right direction.”

Therapeutic plasma exchange in humans lasts about two to three hours and comes with no or mild side effects, said Kiprov, who uses the procedure in his clinical practice. The research team is about to conduct clinical trials to better understand how therapeutic blood exchange might best be applied to treating human ailments of aging.

Heterochronic blood sharing rejuvenates old tissues, and most of the studies on how this works focus on young plasma, its fractions, and a few youthful systemic candidates. However, it was not formally established that young blood is necessary for this multi-tissue rejuvenation. Here, using our recently developed small animal blood exchange process, we replaced half of the plasma in mice with saline containing 5% albumin (terming it a “neutral” age blood exchange, NBE) thus diluting the plasma factors and replenishing the albumin that would be diminished if only saline was used. Our data demonstrate that a single NBE suffices to meet or exceed the rejuvenative effects of enhancing muscle repair, reducing liver adiposity and fibrosis, and increasing hippocampal neurogenesis in old mice, all the key outcomes seen after blood heterochronicity. Comparative proteomic analysis on serum from NBE, and from a similar human clinical procedure of therapeutic plasma exchange (TPE), revealed a molecular re-setting of the systemic signaling milieu, interestingly, elevating the levels of some proteins, which broadly coordinate tissue maintenance and repair and promote immune responses. Moreover, a single TPE yielded functional blood rejuvenation, abrogating the typical old serum inhibition of progenitor cell proliferation. Ectopically added albumin does not seem to be the sole determinant of such rejuvenation, and levels of albumin do not decrease with age nor are increased by NBE/TPE. A model of action (supported by a large body of published data) is that significant dilution of autoregulatory proteins that crosstalk to multiple signaling pathways (with their own feedback loops) would, through changes in gene expression, have long-lasting molecular and functional effects that are consistent with our observations. This work improves our understanding of the systemic paradigms of multi-tissue rejuvenation and suggest a novel and immediate use of the FDA approved TPE for improving the health and resilience of older people.

Vitamins for Your Neurons

Selenium Supplementation Protects Against Obesity and May Extend Lifespan