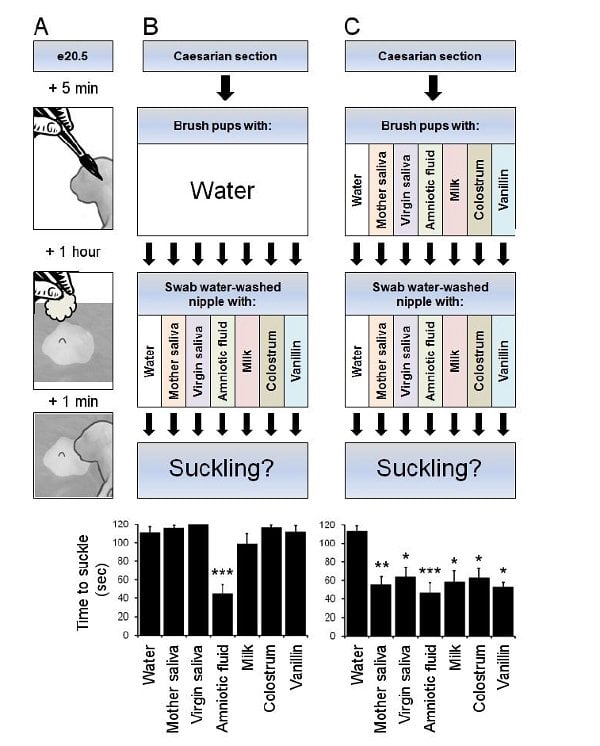 Babies Learn the Smell of Mum

Newborn mice use mum’s unique odor, not a pheromone, to begin breastfeeding.

Researchers show for the first time that a mammal begins to suckle its mother’s milk through a learned response built on learning her unique combination of smells. When it is born, the newborn is exposed to the smell of its mother’s amniotic fluid and the baby then responds to those smells to feed.

Prevailing thought has been that pheromones –chemicals that trigger an innate behavior – drove the suckling response as an automatic behavior. The new work determines that, in mice, the smells must be learned before the behavior can occur.

Suckling is a critical step for survival in mammals, which are defined by giving birth to offspring that need to feed from their mother’s milk. The newborn must begin to feed soon after birth or it will die. It is a crucial, defining behavior in mammals and offers researchers an opportunity to investigate the biology of instinct.

Previous research into suckling has shown that European rabbit mothers use a pheromone to initiate suckling in their newborn babies. This led most scientists to think that all mammals were likely to use the same mechanism. Keen to discover the pheromone involved in other mammals, the team chose the mouse because they have a parenting style similar to that of humans, nurturing and caring for their young.

“We were expecting to find a pheromone controlling suckling in mice, but we found a completely different mechanism at work,” says Dr Darren Logan, lead author of the study from the Wellcome Trust Sanger Institute. “We have shown for the first time that it is not a pheromone response in mice, but a learned response, founded on a mix of odors: the unique signature smell of the mother.”

To discover the smells involved in initiating suckling, researchers introduced newborn mice delivered by Caesarean section to breasts that had been washed clean and then soaked in one of the fluids that a baby would first inhale at birth. These included amniotic fluid, the mother’s saliva (from being licked clean), breast milk and urine. Only the breasts that smelt of the mother’s amniotic fluid initiated suckling.

The team then tested for the presence of a pheromone in the amniotic fluid. They fed pregnant mice strong smelling foods, such as garlic, to change the signature odor of the mother. If a pheromone was involved, the garlic would have no effect on suckling. In fact only those mice that had previous exposure to the amniotic fluid with the strong smell from their mother were able to feed successfully, proving the signature odor must be learned.

“Our work shows us that there is no species-wide pheromone that makes newborn mice feed, but that the mouse pups are actually learning their mother’s unique and variable mix of smells at birth,” explains Associate Professor Lisa Stowers, senior author from The Scripps Research Institute. “So, although the suckling response may look like a pheromone-mediated behavior, it is actually initiated through a fundamentally different process.”

Supporting evidence for this conclusion comes from genetic research conducted by the team. They found that mice who lack a critical gene in the pheromone-detecting region of the nose, called the vomeronasal organ (VNO), were able to locate the mother’s nipple and to suckle. In contrast newborn mice who lacked the ability to smell regular smells, detected in a region called the main olfactory epithelium (MOE) struggled with feeding.

“This is a neat study which shows the value of studying the development underlying an apparently ‘innate’ behavior.” Dr Tristram Wyatt of the University of Oxford. “The surprising result is that mouse pups use the individual odors of the mother to find their first feed. It is a reminder of the way that evolution uses whatever works: there is more than one way to find the first milk meal. The rabbit has a pheromone in the milk, humans may have one around the nipple, and mice learn the individual odor of their mother. All three enable the vital task of getting the newborn to suckle.”

Learning a signature odor may be a critical component of other innate behaviors in mammals. Because humans also form an intensive, nurturing bond with their babies, it suggests that genetic manipulation of the ability to smell in mice will be a useful way to research the neural pathways involved in human instinctive behavior.

How the Smell of Food Can Enable “Time Travel”

Notes about this learning and olfaction research

This work was supported by the NIH-NIDCD and the Skaggs Foundation, and Wellcome Trust grant.