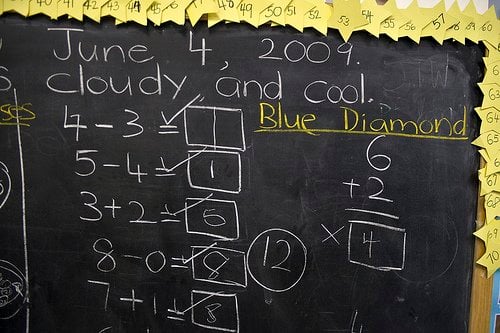 The participants worked on solving math problems while their brain activity was measured in an MRI scanner. The brain scans of the autistic children revealed an unusual pattern of activity in the ventral temporal occipital cortex, an area specialized for processing visual objects, including faces. This image shows some basic math problems on a blackboard.
Home
Autism

Children with autism and average IQs consistently demonstrated superior math skills compared with nonautistic children in the same IQ range, according to a study by researchers at the Stanford University School of Medicine and Lucile Packard Children’s Hospital.

“There appears to be a unique pattern of brain organization that underlies superior problem-solving abilities in children with autism,” said Vinod Menon, PhD, professor of psychiatry and behavioral sciences and a member of the Child Health Research Institute at Packard Children’s.

The autistic children’s enhanced math abilities were tied to patterns of activation in a particular area of their brains — an area normally associated with recognizing faces and visual objects.

Children with autism have difficulty with social interactions, especially interpreting nonverbal cues in face-to-face conversations. They often engage in repetitive behaviors and have a restricted range of interests.

But in addition to such deficits, children with autism sometimes exhibit exceptional skills or talents, known as savant abilities. For example, some can instantly recall the day of the week of any calendar date within a particular range of years — for example, that May 21, 1982, was a Friday. And some display superior mathematical skills.

“Remembering calendar dates is probably not going to help you with academic and professional success,” Menon said. “But being able to solve numerical problems and developing good mathematical skills could make a big difference in the life of a child with autism.”

The idea that people with autism could employ such skills in jobs, and get satisfaction from doing so, has been gaining ground in recent years.

The participants in the study were 36 children, ages 7 to 12. Half had been diagnosed with autism. The other half was the control group. Each group had 14 boys and four girls. (Autism disproportionately affects boys.) All participants had IQs in the normal range and showed normal verbal and reading skills on standardized tests administered as part of the recruitment process for the study. But on the standardized math tests that were administered, the children with autism outperformed children in the control group.

After the math test, researchers interviewed the children to assess which types of problem-solving strategies each had used: Simply remembering an answer they already knew; counting on their fingers or in their heads; or breaking the problem down into components — a comparatively sophisticated method called decomposition. The children with autism displayed greater use of decomposition strategies, suggesting that more analytic strategies, rather than rote memory, were the source of their enhanced abilities.

Then, the children worked on solving math problems while their brain activity was measured in an MRI scanner, in which they had to lie down and remain still. The brain scans of the autistic children revealed an unusual pattern of activity in the ventral temporal occipital cortex, an area specialized for processing visual objects, including faces.

“Our findings suggest that altered patterns of brain organization in areas typically devoted to face processing may underlie the ability of children with autism to develop specialized skills in numerical problem solving,” Iuculano said.

Menon added that previous research “has focused almost exclusively on weaknesses in children with autism. Our study supports the idea that the atypical brain development in autism can lead, not just to deficits, but also to some remarkable cognitive strengths. We think this can be reassuring to parents.”

The research team is now gathering data from a larger group of children with autism to learn more about individual differences in their mathematical abilities. Menon emphasized that not all children with autism have superior math abilities, and that understanding the neural basis of variations in problem-solving abilities is an important topic for future research.

“These findings not only empirically confirm that high-functioning children with autism have especially strong number-problem-solving abilities, but show that this cognitive strength in math is based on different patterns of functional brain organization,” said Carl Feinstein, MD, director of the Center for Autism and Related Disorders at Packard Children’s and professor of psychiatry and behavioral sciences at the School of Medicine. He was not involved in the study.

The study was funded by grants from the Singer Foundation, the Stanford Institute for Neuro-Innovation & Translational Neurosciences, and the National Institutes of Health (grant MH084164).

Contact: Louis Bergeron – Stanford University Medical Center
Source: Stanford University Medical Center press release
Image Source: The image is credited to woodleywonderworks at Flickr. The image is licensed as Creative Commons Attribution 2.0 Generic.
Original Research: The research will be published in Biological Psychiatry on August 17 2013. We will provide a link to the research when available.