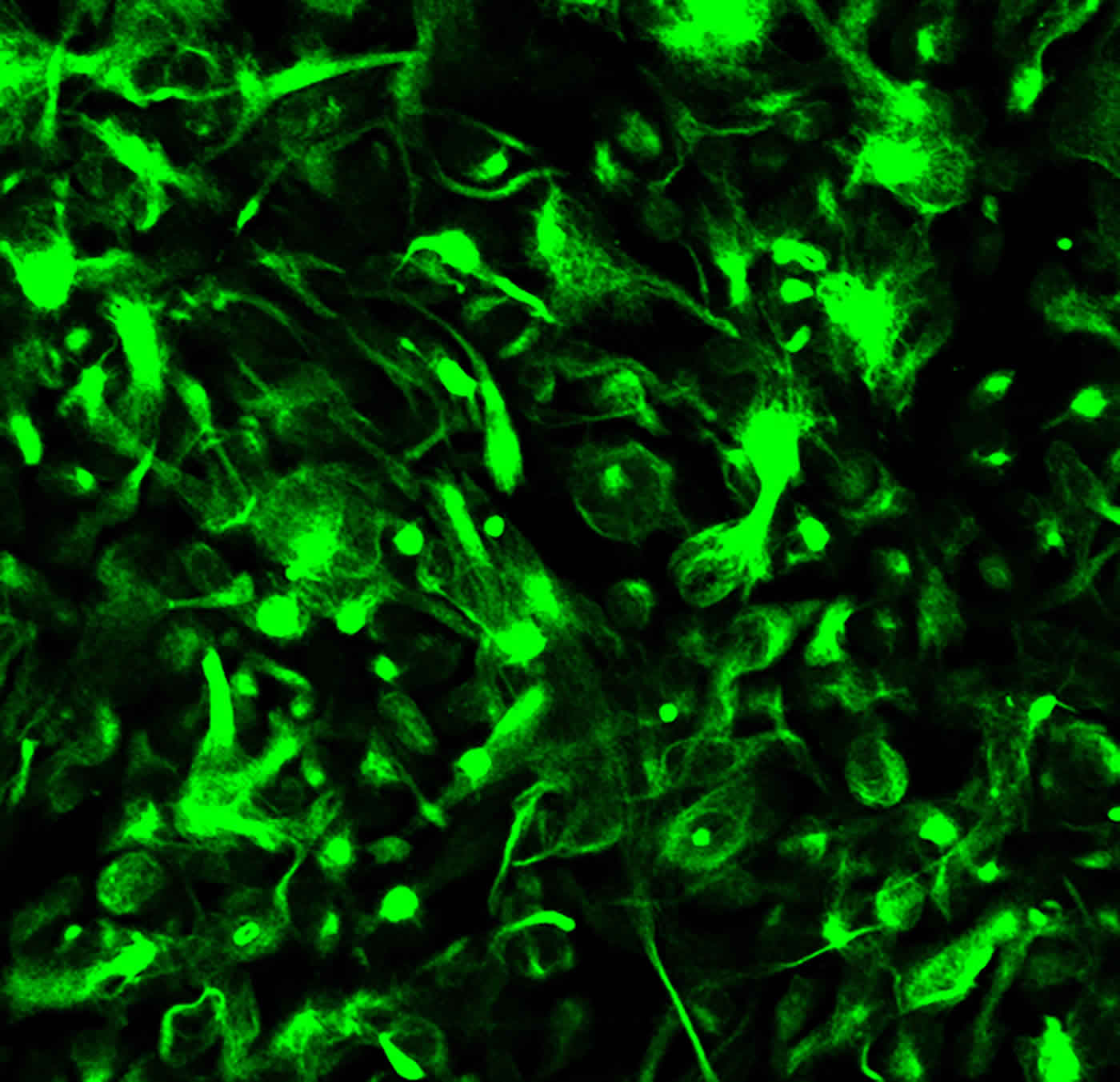 For the first time, researchers have used a cocktail of small molecules to transform human brain cells, called astroglial cells, into functioning neurons for brain repair. The new technology opens the door to the future development of drugs that patients could take as pills to regenerate neurons and to restore brain functions lost after traumatic injuries, stroke, or diseases such as Alzheimer’s. Previous research, such as conventional stem cell therapy, requires brain surgery and therefore is much more invasive and prone to immune-system rejection and other problems. The research, led by Gong Chen, Professor of Biology and the Verne M. Willaman Chair in Life Sciences at Penn State University, will be published online in the journal Cell Stem Cell on Oct. 15th, 2015.

“We have discovered a cocktail of small molecules that can reprogram human brain astroglial cells into neuron-like cells after eight-to-ten days of chemical treatment,” Chen said. The neurons the researchers reprogrammed survived for more than five months in cell culture, where they formed functional synaptic networks. The scientists also injected the reprogrammed human neurons into the brains of living mice, where they integrated into the neural circuits and survived there for at least one month.

“The small molecules are not only easy to synthesize and package into drug pills, but also much more convenient for use by patients than other methods now being developed,” Chen said. Before the promise of the new technology results in pills at a pharmacy, the new research effort must first succeed through much development and testing in the laboratory and then through a series of clinical trials.

The brain has nerve cells called neurons and another kind called glial cells, which include astroglial cells — both are important components of the brain’s nervous system. Healthy astroglial cells surround neurons and provide them with support, protection, oxygen, and nutrients. But when brain tissues are damaged by strokes or trauma, the astroglial cells react by multiplying — sometimes so much that they clog up the nervous system by forming a scar. These astroglial scars can cause health problems by preventing nerve regeneration and by blocking nerve-to-nerve communications between different regions of the brain.

Five students on Chen’s research team, led by graduate student Lei Zhang, tested hundreds of different conditions and eventually identified a cocktail of small molecules that can convert human astroglial cells into functional neurons in a cell-culture dish in the laboratory. The students found that adding small molecules in a certain sequence transformed the cultured human astroglial cells from a flat, polygon shape into a neuron-like shape with long “arms” called axons and dendrites. “These chemically generated neurons are comparable to normal brain neurons in terms of firing electric activity and release of neurotransmitters,” Chen said. “Importantly, the human astroglial-converted neurons survived longer than five months in cell culture and longer than one month in the living mouse brain after transplantation.”

While Chen acknowledges that many technical issues are yet to be solved, he hopes that this new technology may have broad applications in the future treatment of stroke, Alzheimer’s disease, Parkinson’s disease, and other neurological disorders. “Our dream is that, one day, patients with brain disorders can take drug pills at home to regenerate neurons inside their brains without any brain surgery and without any cell transplantation,” Chen said. “Our invention of the small-molecule cocktail helps us to make a huge step closer to that dream.”

Funding: The research was supported by the National Institutes of Health (MH083911 and AG045656) and the Penn State University Stem Cell Fund.

Summary
We have recently demonstrated that reactive glial cells can be directly reprogrammed into functional neurons by a single neural transcription factor, NeuroD1. Here we report that a combination of small molecules can also reprogram human astrocytes in culture into fully functional neurons. We demonstrate that sequential exposure of human astrocytes to a cocktail of nine small molecules that inhibit glial but activate neuronal signaling pathways can successfully reprogram astrocytes into neurons in 8-10 days. This chemical reprogramming is mediated through epigenetic regulation and involves transcriptional activation of NEUROD1 and NEUROGENIN2. The human astrocyte-converted neurons can survive for >5 months in culture and form functional synaptic networks with synchronous burst activities. The chemically reprogrammed human neurons can also survive for >1 month in the mouse brain in vivo and integrate into local circuits. Our study opens a new avenue using chemical compounds to reprogram reactive glial cells into functional neurons.