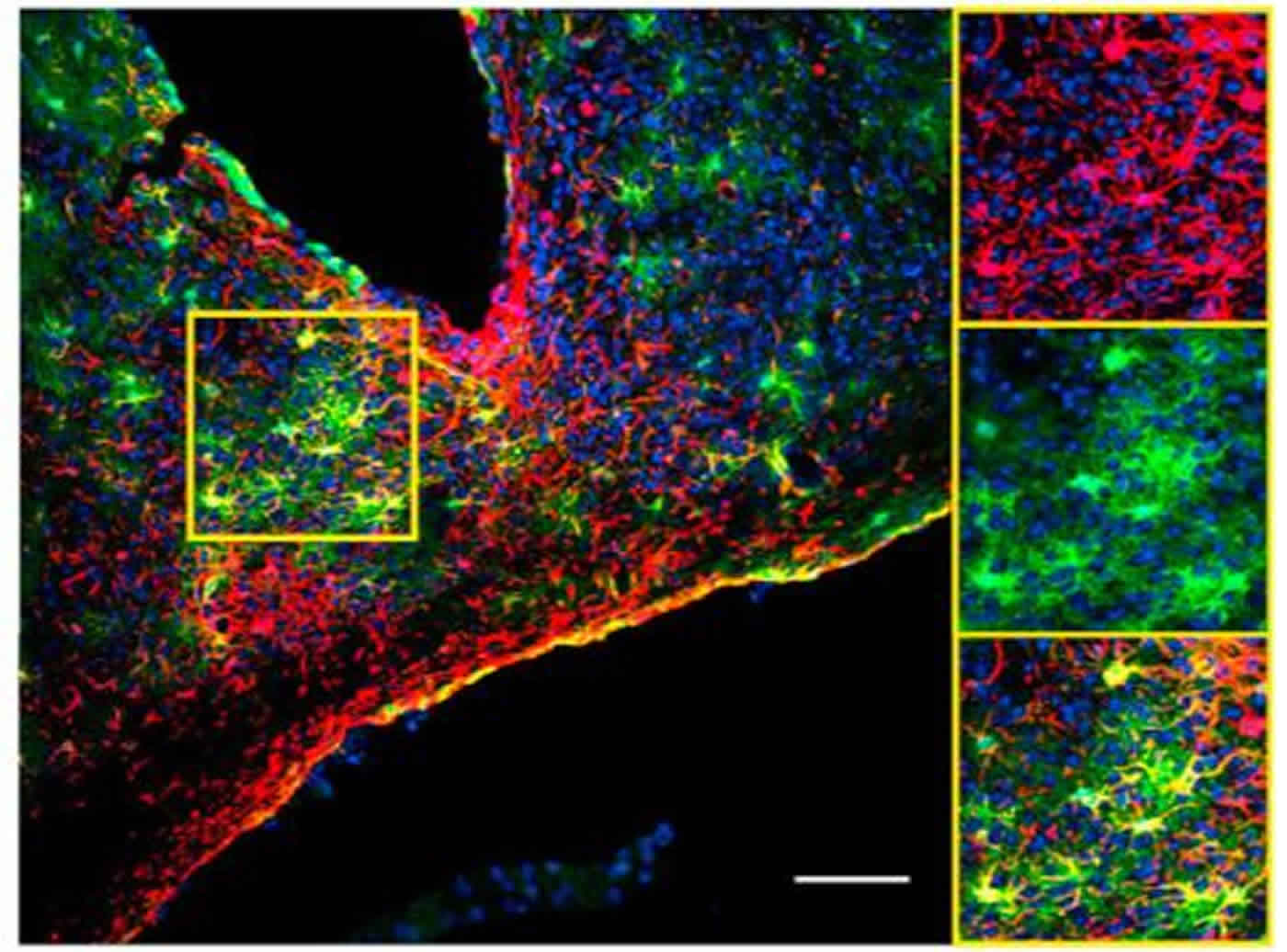 In this slice of the master clock, cells expressing an astrocyte-specific structural protein that had been stained red (top right panel) matched up well with cells that had been equipped to fluoresce green when they were expressing a clock gene (middle right panel), demonstrating that the scientists could watch astrocytes tick in the clock. NeuroscienceNews.com image is credited to Herzog Lab.

Star-shaped cells around neurons prove to be surprisingly important players in body’s clock.

Until recently, work on biological clocks that dictate daily fluctuations in most body functions, including core body temperature and alertness, focused on neurons, those electrically excitable cells that are the divas of the central nervous system.

Asked to define the body’s master clock, biologists would say it is two small spheres — the suprachiasmatic nuclei, or SCN — in the brain that consist of 20,000 neurons. They likely wouldn’t even mention the 6,000 astroglia mixed in with the neurons, said Erik Herzog, a neuroscientist in Arts & Sciences at Washington University in St. Louis. In a March 23 advance online publication from Current Biology, Herzog and his collaborators show that the astroglia help to set the pace of the SCN to schedule a mouse’s day.

The astroglia, or astrocytes, were passed over in silence partly because they weren’t considered to be important. Often called “support cells,” they were supposed to be gap fillers or place holders. Their Latin name, after all, means “starry glue.”

Then two things happened. Scientists discovered that almost all the cells in the body keep time, with a few exceptions such as stem cells. And they also began to realize that the astrocytes do a lot more than they had thought. Among other things, they secrete and slurp neurotransmitters and help neurons form strengthened synapses to consolidate what we’ve learned. In fact, scientists began to speak of the tripartite synapse, emphasizing the role of an astrocyte in the communication between two neurons.

So for a neuroscientist like Herzog, the obvious question was: What were the astrocytes doing in the SCN? Were they keeping time? And if they were keeping time, how did the astrocyte clocks interact with the neuron clocks?

Herzog answered the first question in 2005 — yes, astrocytes have daily clocks — but then the research got stuck. To figure out what the astrocytes were doing in living networks of cells and in living animals, the scientists had to be able to manipulate them independently of the neurons with which they are entwined. The tools to do this simply didn’t exist.

Now, Herzog’s graduate student Matt Tso, the first author on the paper, has solved the problem. The tools he devised allow astrocytes in the SCN to be independently controlled. Using his toolkit, the lab ran two experiments, altering the astrocyte clocks and monitoring the highly ritualized, daily behavior of wheel-running in mice.

The scientists were surprised by the results, to be published in the April 7 print issue of Current Biology. In both experiments, tweaks to the astrocyte clocks reliably slowed the mouse’s sense of time. “We had no idea they would be that influential,” Tso said.

Figuring out how and where these clocks function in the brain and body is important because their influence is ubiquitous. For his part, Herzog is already looking at the connections between circadian rhythm and brain cancer, pre-term birth, manic depression and other diseases.

At first, scientists were aware only of the clock in the SCN. If it is destroyed in an animal such as a rat, the rat will sleep for the same amount of time but in fits and starts instead of for long periods.

But then the genes that make up the biological clock began to be found in many different kinds of cells: lung, heart, liver, and sperm. Hair cells, by the way, prefer to grow in the evening.

So Herzog began to wonder about astrocytes in the SCN. Were they, too, keeping time?

To find out, he coupled a bioluminescent protein to a clock gene and then isolated astrocytes in a glass dish. He found that the astrocytes brightened and dimmed rhythmically, proof that they were keeping time.

The obvious next step was to look at the astrocytes not only in a glass dish but also in SCN slices and in living animals. But that turned out to be easier said than done. “We burned through two postdocs trying to get these experiments to work,” Herzog said.

As a first step, collaborator Michihiro Mieda from Kanazawa University created a “conditional reporter” that switched on a firefly luciferase whenever a clock gene was being expressed in a cell of interest. Tso delivered the tiny switch to the astrocytes inside a virus.

In slices of a mouse SCN with this reporter in place, the scientists could see that the star-shaped cells were expressing the clock gene in a rhythmic pattern. This proved that astrocytes keep time in living tissue where they are interacting with one another and with neurons, as well as when they are isolated in a dish.

Next, the scientists used the new gene-editing tool CRISPR-Cas9 to delete a clock gene in only the astrocytes of the SCN of living mice. They then monitored the mice for changes in the time they started running on a wheel each day.

Running is an easily measured behavior that provides a reliable indication of the state of the underlying body clock. A mouse in constant darkness will start running on a wheel approximately every 23.7 hours, typically deviating by less than 10 minutes from this schedule.

“When we deleted the gene in the astrocytes, we had good reason to predict the rhythm would remain unchanged,” Tso said. “When people deleted this clock gene in neurons, the animals completely lost rhythm, which suggests that the neurons are necessary to sustain a daily rhythm.”

Instead, when astrocyte clock was deleted, the SCN clock ran slower. The mice climbed into their wheels one hour later than usual every day.

“This was quite a surprise,” Tso said.

The results of the next experiment were even more exciting for them. The scientists began with a mouse that has a mutation making its clocks run fast and then “rescued” this mutation in astrocytes but not in neurons. This meant that the astrocyte clocks were running at the normal pace but the neuron clocks were still fast.

“We expected the SCN to follow the neurons’ pace. There are 10 times more neurons in the SCN than astrocytes. Why would the behavior follow the astrocytes’? ” Tso said.

But that is exactly what they did. The mice with the restored astrocyte clocks climbed into their wheels two hours later than mice whose astrocytes and neurons were both fast-paced.

The scientists don’t know why the astrocytes are so important or how they are communicating with neurons. But their research adds to a body of work suggesting that astrocytes, far from being place holders or gap fillers, may actually be running the show. It wouldn’t be the first time the power was behind rather than on the throne.

Highlights
•Astrocytes, like neurons, are synchronous circadian oscillators in the SCN
•SCN astrocytes modulate daily rhythms in locomotor behavior and SCN physiology
•Loss of Bmal1 in SCN astrocytes lengthens period in SCN neurons and behavior
•The circadian period of the SCN and locomotion depends on astrocyte period

Summary
Astrocytes are active partners in neural information processing. However, the roles of astrocytes in regulating behavior remain unclear. Because astrocytes have persistent circadian clock gene expression and ATP release in vitro, we hypothesized that they regulate daily rhythms in neurons and behavior. Here, we demonstrated that daily rhythms in astrocytes within the mammalian master circadian pacemaker, the suprachiasmatic nucleus (SCN), determine the period of wheel-running activity. Ablating the essential clock gene Bmal1 specifically in SCN astrocytes lengthened the circadian period of clock gene expression in the SCN and in locomotor behavior. Similarly, excision of the short-period CK1ε tau mutation specifically from SCN astrocytes resulted in lengthened rhythms in the SCN and behavior. These results indicate that astrocytes within the SCN communicate to neurons to determine circadian rhythms in physiology and in rest activity.