Electrosurgical resection using devices such as an electric knife or diathermy blade is currently a widely used technique in neurosurgery. When tissue is burned, tissue molecules are dispersed in the form of surgical smoke. In the method developed by researchers at Tampere University, the surgical smoke is fed into a new type of measuring system that can identify malignant tissue and distinguish it from healthy tissue.

An article on using surgical smoke to identify brain tumours was recently published in the Journal of Neurosurgery.

“In current clinical practice, frozen section analysis is the gold standard for intraoperative tumour identification. In that method, a small sample of the tumour is given to a pathologist during surgery,” says researcher Ilkka Haapala from Tampere University.

The pathologist undertakes a microscopic analysis of the sample and phones the operating theatre to report the results.

“Our new method offers both a promising way to identify malignant tissue in real time and the ability to study several samples from different points of the tumour,” Haapala explains.

“The specific advantage of the equipment is that it can be connected to the instrumentation already present in neurosurgical operating theatres,” Haapala points out.

The technology is based on differential mobility spectrometry (DMS), wherein flue gas ions are fed into an electric field. The distribution of ions in the electric field is tissue-specific, and the tissue can be identified on the basis of the resulting “odour fingerprint”. 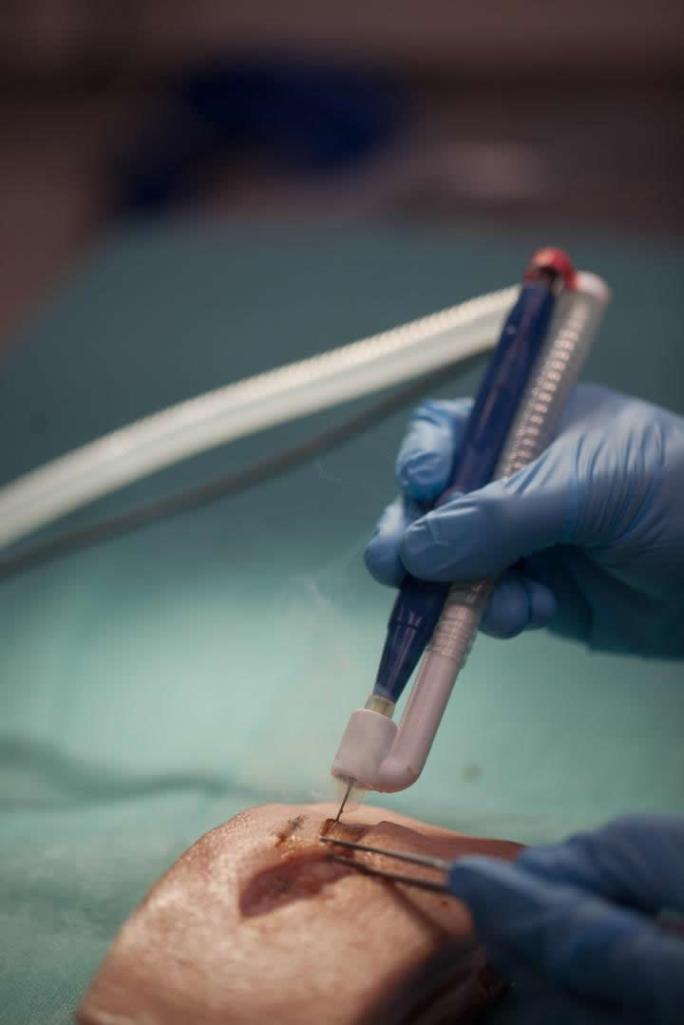 Flue gas created by an electric knife is fed directly into the measurement system. The image is credited to Antti Roine.

The equipment used was developed specifically for the study. It consists of a machine learning system, which analyses the flue gas with DMS technology, and an electric knife, which is used to produce the flue gas from the tissues.

OBJECTIVE
There is a need for real-time, intraoperative tissue identification technology in neurosurgery. Several solutions are under development for that purpose, but their adaptability for standard clinical use has been hindered by high cost and impracticality issues. The authors tested and preliminarily validated a method for brain tumor identification that is based on the analysis of diathermy smoke using differential mobility spectrometry (DMS).

METHODS
A DMS connected to a special smoke sampling system was used to discriminate brain tumors and control samples ex vivo in samples from 28 patients who had undergone neurosurgical operations. They included meningiomas (WHO grade I), pilocytic astrocytomas (grade I), other low-grade gliomas (grade II), glioblastomas (grade IV), CNS metastases, and hemorrhagic or traumatically damaged brain tissue as control samples. Original samples were cut into 694 smaller specimens in total.

RESULTS
An overall classification accuracy (CA) of 50% (vs 14% by chance) was achieved in 7-class classification. The CA improved significantly (up to 83%) when the samples originally preserved in Tissue-Tek conservation medium were excluded from the analysis. The CA further improved when fewer classes were used. The highest binary classification accuracy, 94%, was obtained in low-grade glioma (grade II) versus control.

CONCLUSIONS
The authors’ results show that surgical smoke from various brain tumors has distinct DMS profiles and the DMS analyzer connected to a special sampling system can differentiate between tumorous and nontumorous tissue and also between different tumor types ex vivo.