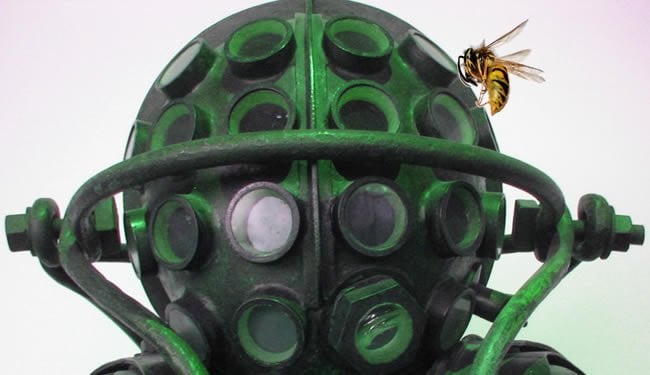 Researchers have developed a camera system that mimics the bee eye. The artificial bee eyes allow the researchers to take images that are believed to be similar to the bee’s viewpoint. Even with questions surrounding the replication of the bee viewpoint, this research should prove important in fields such as robotics, artificial intelligence, visual neuroscience and artificial neural network software.

Despite their tiny brains, bees have remarkable navigation capabilities based on their vision. Now scientists have recreated a light-weight imaging system mimicking a honeybee’s field of view, which could change the way we build mobile robots and small flying vehicles.

Consisting of a light-weight mirror-lens combination attached to a USB video camera, the artificial eye manages to achieve a field of vision comparable to that of a bee. In combining a curved reflective surface that is built into acrylic glass with lenses covering the frontal field, the bee eye camera has allowed the researchers to take unique images showing the world from an insect’s viewpoint.

In the future, the researchers hope to include UV to fully reflect a bee’s colour vision, which is important to honeybees for flower recognition and discrimination and also polarisation vision, which bees use for orientation. They also hope to incorporate models of the subsequent neural processing stages.

As the researchers write, “Despite the discussed limitations of our model of the spatial resolution of the honeybees compound eyes, we are confident that it is useful for many purposes, e.g. for the simulation of bee-like agents in virtual environments and, in combination with presented imaging system, for testing bee-inspired visual navigation strategies on mobile robots.”