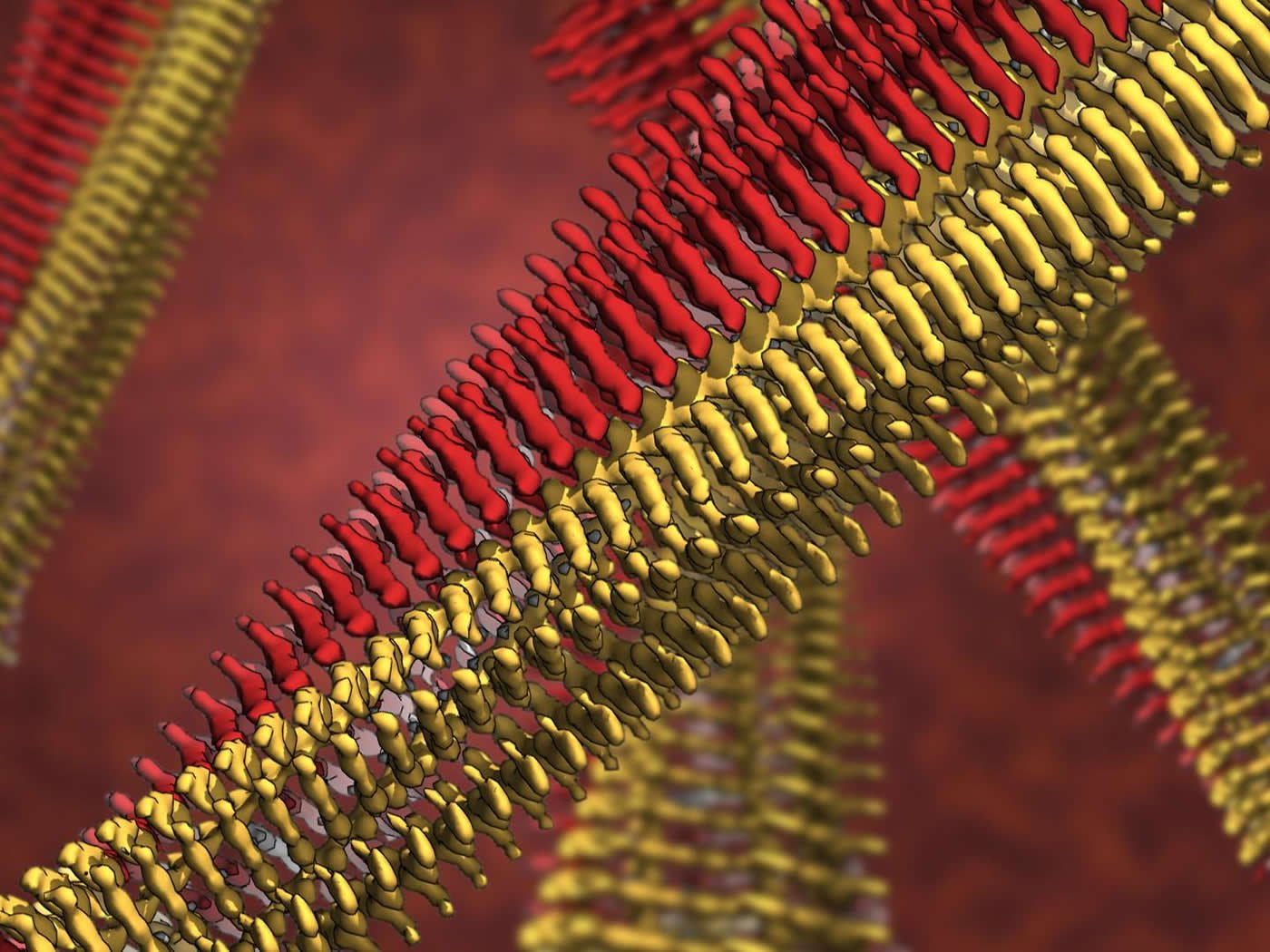 This is an illustration of IAPP fibrils. Image is credited to Forschungszentrum Jülich/HHU Düsseldorf/Gunnar Schröder.

New indication of a link between Alzheimer’s and diabetes

Pathological protein clumps are characteristic of a series of diseases, such as Alzheimer’s disease, Parkinson’s disease, and type 2 diabetes. Scientists at Forschungszentrum Jülich, Heinrich Heine University Düsseldorf, and Maastricht University have now used cryo-electron microscopy to obtain a sharp image for the first time of how individual molecules are arranged in protein strings, which constitute the deposits typical for diabetes. The structure of the fibrils is very similar to that of Alzheimer’s fibrils. These findings are in line with other commonalities that researchers have discovered in the last few years.

Around 120 years ago, US doctor Eugene Lindsay Opie discovered unusual protein deposits in the pancreases of patients with type 2 diabetes that were similar to those found in the brain for many neurodegenerative diseases. Type 2 diabetes is one of the most widespread diseases, formerly known as adult-onset diabetes. The deposits, known as islet amyloid, comprise tiny protein threads known as fibrils. In the case of diabetes, they consist of the peptide hormone IAPP. In the pancreas, they contribute to the death and dysfunction of beta cells that are responsible for producing insulin. The hormone plays an important role in reducing blood sugar levels.

“These amyloid fibrils have been intensively researched for many years. For a long time, however, it was only possible to draw on very low-resolution structures,” explains Gunnar Schröder from Forschungszentrum Jülich and Heinrich Heine University Düsseldorf. In 2017, together with partners and colleagues, Schröder presented one of the first-ever atomic-level 3D models of such a fibril: in this instance an Alzheimer’s fibril comprising an amyloid beta peptide (Abeta).

“For the first time, we have succeeded in achieving a 3D reconstruction of an IAPP fibril typical for diabetes in comparable resolution,” Schröder says. The resolution achieved by the team of 4 angstroms, corresponding to 0.4 nanometres, is within the magnitude of atomic radii and atomic bond lengths. In addition to other details, the precise arrangement of the molecules in the fibrils is thus made visible for the first time. The model shows how individual IAPP molecules are stacked on top of each other to form fibres with an S-shaped cross section. The structure is similar to that of the S-shaped fold in Abeta fibrils that are typical for Alzheimer’s.

“This similarity is interesting. There is an epidemiological correlation between Alzheimer’s and diabetes: Alzheimer’s patients have a greater risk of contracting diabetes and vice versa,” explains Wolfgang Hoyer, who also conducts research at Heinrich Heine University Düsseldorf and Forschungszentrum Jülich. There are also other correlations. For example, scientists have already detected small impurities of “foreign” IAPP peptides that are typical of diabetes in the amyloid deposits of Alzheimer’s patients. Furthermore, when one of the type of fibrils is added, there is increased growth of deposits of the other type, as researchers discovered in tests on mice.

The new high-resolution fibril model now provides a platform for gaining a better understanding of the formation of the fibrils in the case of diabetes and for developing drugs that can directly tackle the cause of the disease. “Inhibitors can now be developed, for instance, in a targeted manner to suppress the formation of the fibrils,” explains Hoyer, who has been researching binding proteins in this field for a number of years now. Such proteins prevent individual molecules from forming amyloids and can thus delay, or even halt, the outbreak of diabetes, Alzheimer’s, and Parkinson’s. Another approach is the development of substitutes for the IAPP peptide that are not prone to the formation of fibrils. Among the functions that IAPP assumes is that of an appetite-suppressing hormone in the body. The substitutes are not only interesting therefore for the treatment of type 2 diabetes but also the treatment of other diseases such as type 1 diabetes and morbid obesity.

Cryo-electron microscopy is still a relatively new research method for determining the structure of biomolecules on the atomic level. Jacques Dubochet, Joachim Frank, and Richard Henderson were awarded the 2017 Nobel Prize in Chemistry for developing this method.

Why Our Obsession With Happy Endings Can Lead to Bad Decisions

Amyloid deposits consisting of fibrillar islet amyloid polypeptide (IAPP) in pancreatic islets are associated with beta-cell loss and have been implicated in type 2 diabetes (T2D). Here, we applied cryo-EM to reconstruct densities of three dominant IAPP fibril polymorphs, formed in vitro from synthetic human IAPP. An atomic model of the main polymorph, built from a density map of 4.2-Å resolution, reveals two S-shaped, intertwined protofilaments. The segment 21-NNFGAIL-27, essential for IAPP amyloidogenicity, forms the protofilament interface together with Tyr37 and the amidated C terminus. The S-fold resembles polymorphs of Alzheimer’s disease (AD)-associated amyloid-β (Aβ) fibrils, which might account for the epidemiological link between T2D and AD and reports on IAPP–Aβ cross-seeding in vivo. The results structurally link the early-onset T2D IAPP genetic polymorphism (encoding Ser20Gly) with the AD Arctic mutation (Glu22Gly) of Aβ and support the design of inhibitors and imaging probes for IAPP fibrils.