Link Between ADHD and Vision Impairment in Children

Attention deficit hyperactivity disorder is one of the most frequently encountered neurodevelopmental disorders of childhood, and a new study from researchers at the University of Alabama at Birmingham recently published in Optometry and Vision Science shows a relationship between ADHD and vision impairments in children.

This finding suggests that children with vision impairment should be monitored for signs and symptoms of ADHD so that if present, this dual impairment of vision and attention can best be addressed.

Director of the UAB Center for Low Vision Rehabilitation, Dawn DeCarlo, O.D., was the lead investigator on the study. She says just because vision problems that are not correctable with glasses or contacts are associated with ADHD that does not mean that one causes the other.

The national study was produced in response to patients of DeCarlo exhibiting vision impairment and ADHD. A previous paper reported an increased prevalence of ADHD among the children in her vision rehabilitation clinic.

“Because we do not know if the relationship is causal, we have no recommendations for prevention,” DeCarlo said. “I think it is more important that parents realize that children with vision problems may also have attention problems and that both require professional diagnosis and treatment.” 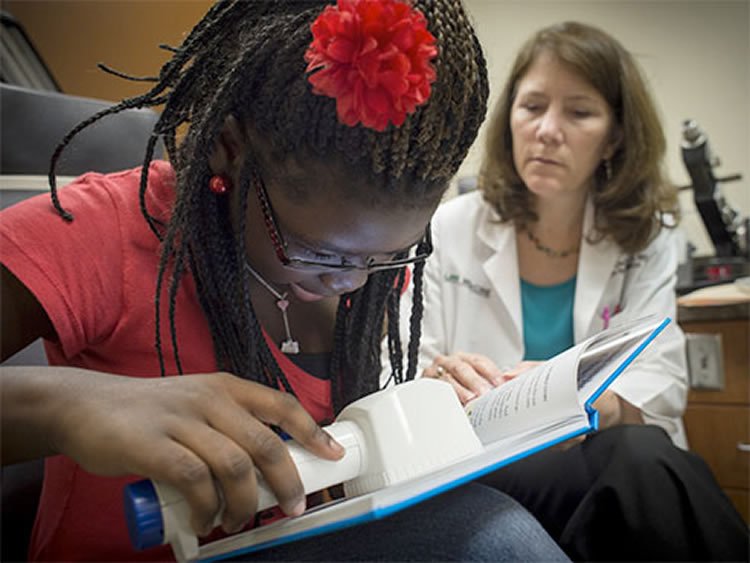 Dawn DeCarlo is part of a new study that shows a link between noncorrectable vision problems and ADHD in children. Image adapted from the UAB press release.

So if your child has vision problems, should you be worried about them developing ADHD?

“I wouldn’t worry about them developing ADHD,” DeCarlo said. “But if they seemed to have symptoms of ADHD I’d make sure that all of their vision needs are addressed through proper eye care and vision rehabilitation and would have them evaluated by an expert in attention disorders.”

About this psychology and vision research

Purpose: To compare the prevalence of attention deficit/hyperactivity disorder (ADHD) in children with normal vision and with vision problems not correctable with glasses or contact lenses (vision problems) as determined by parent report in a nationwide telephone survey.

Methods: This cross-sectional study included 75,171 children without intellectual impairment aged 4 to 17 years participating in the 2011 to 2012 National Survey of Children’s Health, conducted by the U.S. Centers for Disease Control and Prevention. Demographic information and information regarding vision and ADHD status were obtained by parent interview. Questions asked whether they had ever been told by a doctor or health care provider that the child had a vision problem not correctable with glasses or contact lenses, ADHD, intellectual impairment, or one of 13 other common chronic conditions of childhood. A follow-up question asked about condition severity. The main outcome measure was current ADHD.

Conclusions: In this large nationally representative sample, the prevalence of ADHD was greater among children with vision problems not correctable with glasses or contacts. The association between vision problems and ADHD remains even after adjusting for other factors known to be associated with ADHD.