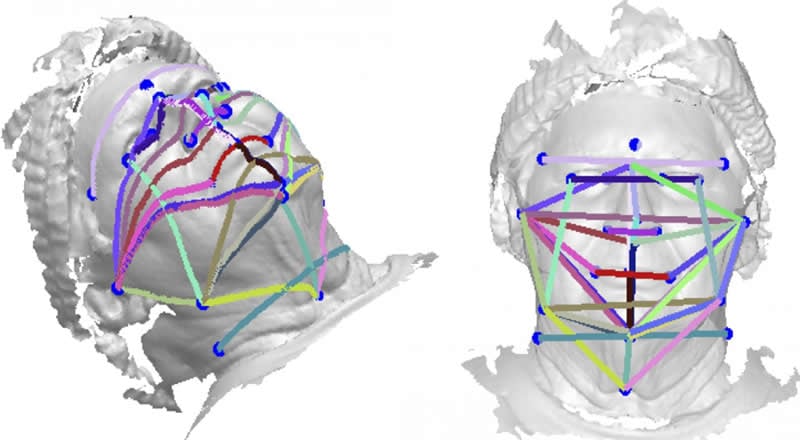 3D face photos could be a sleep apnea screening tool

Summary: Using 3D imaging and artificial intelligence, researchers discovered the shortest distance between two points on the curved surface of the face predicted, with 89% accuracy, which patients had sleep apnea.

Facial features analyzed from 3D photographs could predict the likelihood of having obstructive sleep apnea, according to a study published in the April issue of the Journal of Clinical Sleep Medicine.

“This application of the technique used predetermined landmarks on the face and neck,” said principle investigator Peter Eastwood, who holds a doctorate in respiratory and sleep physiology and is the director of the Centre for Sleep Science at the University of Western Australia (UWA). “Geodesic and linear distances between these landmarks were determined, and a linear discriminant algorithm was trained, tested and used to classify an individual as being at high or low risk of having obstructive sleep apnea.”

The study involved 300 individuals with varying severity levels of sleep apnea and 100 people without sleep apnea. These individuals came from a local hospital and from the Raine Study, a longitudinal cohort study in Western Australia. All underwent overnight sleep studies and took 3D photos with a craniofacial scanner system. Data were used to build a predictive algorithm that was tested on another patient set.

Eastwood worked with Syed Zulqarnain Gilani, a computer scientist at UWA to identify the facial features most commonly associated with sleep apnea as neck width and degree of retrusion of the lower jaw (retrognathia), but the study also uncovered other possible indicators.

“The data obtained from the present study indicate that other measurements such as width and length of the lower jaw, width of the face, and distance between the eyes also contribute to distinguishing individuals with and without OSA,” he said.

In a related commentary, also published in the April issue of JCSM, Drs. Ofer Jacobowitz and Stuart MacKay indicated that they see a bright future for 3D photography as a screening tool, potentially combined with data from a patient’s digital health tracker and health history.

“Certain wearable devices are already capable of measuring pulse oximetry and some provide oximetry variability analysis,” they wrote. “Likewise, the home of tomorrow will likely incorporate sensors in the bedroom which may gather physiological sleep data using optical, acoustic, infrared, ultrasonographic or other means.”

According to Eastwood, existing studies show a genetic predisposition to sleep apnea, and facial structure is a significant component of such predisposition, leading researchers to seek an accessible, affordable method of screening based on facial characteristics. Eastwood believes that 3D facial photography could represent the first, inexpensive, widely available screening tool for sleep apnea.

“OSA is a huge public health problem, and despite effective treatments being available, many with OSA are currently undiagnosed,” said Eastwood. “Therefore, simple, accurate screening tools are needed to predict those who have OSA.”

Manipulating Stress Response in Cells Could Help Slow Down Aging

STUDY OBJECTIVES: Craniofacial anatomy is recognized as an important predisposing factor in the pathogenesis of obstructive sleep apnea (OSA). This study used three-dimensional (3D) facial surface analysis of linear and geodesic (shortest line between points over a curved surface) distances to determine the combination of measurements that best predicts presence and severity of OSA.

METHODS: 3D face photographs were obtained in 100 adults without OSA (apnea-hypopnea index [AHI] < 5 events/h), 100 with mild OSA (AHI 5 to < 15 events/h), 100 with moderate OSA (AHI 15 to < 30 events/h), and 100 with severe OSA (AHI ≥ 30 events/h). Measurements of linear distances and angles, and geodesic distances were obtained between 24 anatomical landmarks from the 3D photographs. The accuracy with which different combinations of measurements could classify an individual as having OSA or not was assessed using linear discriminant analyses and receiver operating characteristic analyses. These analyses were repeated using different AHI thresholds to define presence of OSA.

RESULTS: Relative to linear measurements, geodesic measurements of craniofacial anatomy improved the ability to identify individuals with and without OSA (classification accuracy 86% and 89% respectively, P < .01). A maximum classification accuracy of 91% was achieved when linear and geodesic measurements were combined into a single predictive algorithm. Accuracy decreased when using AHI thresholds ≥ 10 events/h and ≥ 15 events/h to define OSA although greatest accuracy was always achieved using a combination of linear and geodesic distances.

CONCLUSIONS: This study suggests that 3D photographs of the face have predictive value for OSA and that geodesic measurements enhance this capacity.

The faces of sleep apnea in the age of machine learning

Obstructive sleep apnea (OSA) is underdiagnosed and untreated in a significant number of adult patients,1,2 despite advocacy in the last decade for development and adoption of new methods for diagnosis.3,4 In the same period, we have witnessed widespread implementation of machine-learning technologies for analysis of “big data” and prediction tools. Artificial intelligence is used for speech recognition on smart phones or home speakers, to detect financial fraud, image recognition in self-driving cars, social media preferences, and for medical and scientific diagnostics. Since OSA is a prevalent condition affecting millions of individuals, it is logical that screening for those at risk of OSA would be easier using machine-learning tools.