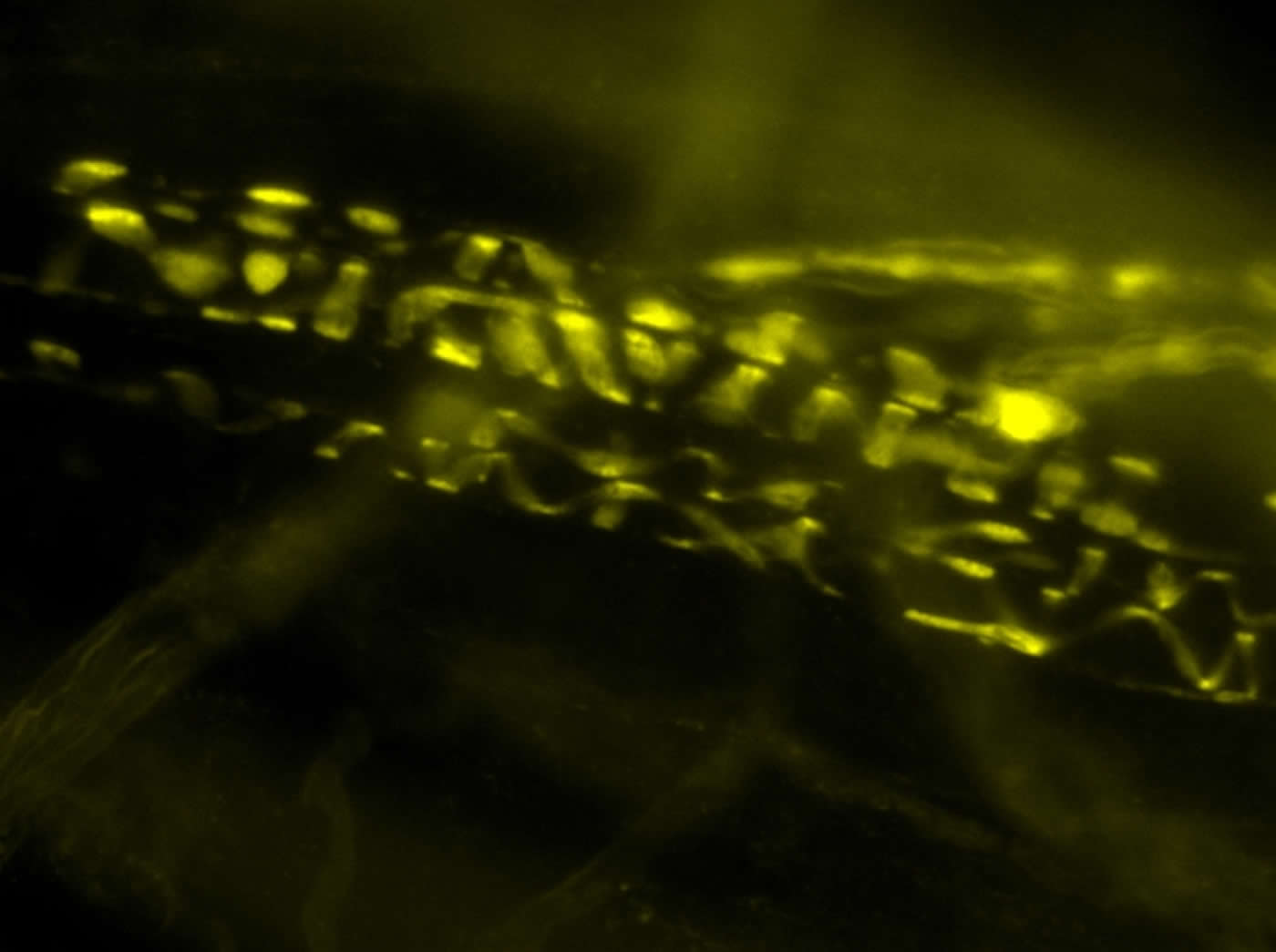 Movement detecting nerve endings in a muscle, where whirlin is needed to keep them sensitive. Image adapted from the University of Aberdeen press release.

Absence of Protein Affects Ability to Feel Limbs and Movement

Researchers at the University of Aberdeen have taken a step closer to understanding the nerve endings which report touch and movement to the brain – which could potentially be a powerful new drug target and save many lives in the future.

Sensing movement, stretch and touch play a vital role in our day-to-day life but go largely unnoticed or unappreciated – until they begin to go wrong.

Of all the senses – taste, smell, sight, touch, hearing, heat/cold and pain – the senses reporting touch and movement are the least understood. Yet detecting movement is hugely important for hearing, balance, moving properly and even controlling our blood pressure.

Scientists from the Universities of Aberdeen and Columbia, New York have now discovered that a protein called Whirlin, which is essential to avoid a severe genetic deafness in children called Usher’s Syndrome, is also in the nerve endings which detect movement, and its absence also damages the ability to feel our limb and muscle moving.

The collaboration between Dr Guy Bewick from the University’s Institute of Medical Sciences, and Dr Joriene de Nooij and Prof Tom Jessell from a world leading neuroscience lab at Columbia University, New York, hope their findings could eventually lead to a breakthrough in developing treatments for not only Usher’s Syndrome but even high blood pressure (hypertension), the world’s leading cause of heart disease, kidney failure and stroke.

“As we already know, when whirlin is defective it causes the devastating illness Usher’s Syndrome. Our new findings show that whirlin is also in nerve endings that detect movement but as it is actually placed totally within the nerve endings it cannot be the first link in the chain of detecting movement. But, crucially it has lots of ‘sticky’ regions on it which stick all the molecules involved together as an efficient unit. This is why movement detection is much worse without it.

“Therefore, we now plan to use undamaged whirlin as a ‘sticky’ hook to fish out all the molecules in this unit. This should lead to the discovery of the vital and so far mysterious movement detector molecule.”

This builds upon previous research conducted by Dr Bewick starting in 2005, which found how the sensitivity of these nerve endings are controlled – by a powerful signal, like a volume control, that can turn movement detector nerve sensitivity up and down.

“Since hypertension is the major cause of heart disease, stroke and kidney failure, and common treatments are often not effective enough, developing new drugs could potentially save many lives.”

The findings are published in the Journal of Neuroscience and were partly funded by the Medical Research Council.

Mechanoreception is an essential feature of many sensory modalities. Nevertheless, the mechanisms that govern the conversion of a mechanical force to distinct patterns of action potentials remain poorly understood. Proprioceptive mechanoreceptors reside in skeletal muscle and inform the nervous system of the position of body and limbs in space. We show here that Whirlin/Deafness autosomal recessive 31 (DFNB31), a PDZ-scaffold protein involved in vestibular and auditory hair cell transduction, is also expressed by proprioceptive sensory neurons (pSNs) in dorsal root ganglia in mice. Whirlin localizes to the peripheral sensory endings of pSNs and facilitates pSN afferent firing in response to muscle stretch. The requirement of Whirlin in both proprioceptors and hair cells suggests that accessory mechanosensory signaling molecules define common features of mechanoreceptive processing across sensory systems.