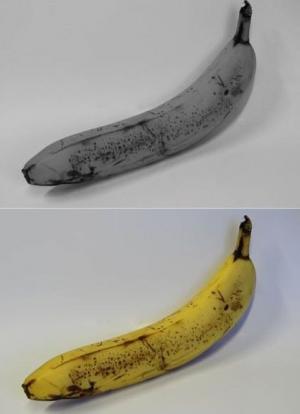 Scientists at the University of Tübingen explore how prior knowledge influences our visual senses.

The perception and processing of color has fascinated neuroscientists for a long time, as our brain influences our perception of it to such a degree that colors could be called an illusion. One mystery was: What happens in the brain when we look at black-and-white photographs? Do our brains fill in the colors?

Neuroscientists Michael Bannert and Andreas Bartels of the Bernstein Center and the Werner Reichardt Centre for Integrative Neuroscience in Tübingen addressed these questions. In their work, published in the leading scientific journal Current Biology, they showed study participants black-and-white photos of bananas, broccoli, strawberries, and of other objects associated with a typical color (yellow, red and green in the examples above). While doing so, they recorded their subjects’ brain activity using functional imaging. The true purpose of the study was unknown to the subjects, and to distract their attention they were shown slowly rotating objects and told to report the direction in which they were moving.

After recording brain responses to the black and white objects, the scientists presented real colors to their subjects, in the shape of yellow, green, red and blue rings. This allowed them to record the activity of the brain as it responded to different, real colors.

It turned out that the mere sight of black-and-white photos automatically elicited brain activity patterns that specifically encoded colors. These activity patterns corresponded to those that were elicited when the observers viewed real color stimuli. These patterns encoded the typical color of the respective object seen, even though it was presented in black and white. The typical colors of the presented objects could therefore be determined from the brain’s activity, even though they were shown without color.

“It was particularly interesting that the colors of the objects were only encoded in the primary visual cortex,” says Michael Bannert. The primary visual cortex is one of the first places a visual signal arrives in the brain. Scientists had assumed it simply passed on information about the physical properties of things seen, but was not able to recognize objects or to store color knowledge associated with objects. “This result shows that higher-level prior knowledge – in this case of object-colors – is projected onto the earliest stages of visual processing,” according to Andreas Bartels.

This study represents a significant contribution to answering the question of how prior knowledge contributes to perception on a neuronal basis. The projection of prior knowledge onto the earliest processing stages of the visual brain may facilitate the recognition of objects in difficult and noisy environments, such as in fog, and be relevant for colors in changing light conditions over the course of the day, when the weather is overcast, when we are indoors and so on. On the other hand, if prior knowledge or expectations have too much influence on early visual processing stages, this may account for hallucinations and the pathological perception of illusions.

Autistic People Are Better at Reading Emotions in Cartoons

Notes about this neuroimaging and visual neuroscience research