Structural protein may be new marker of depression 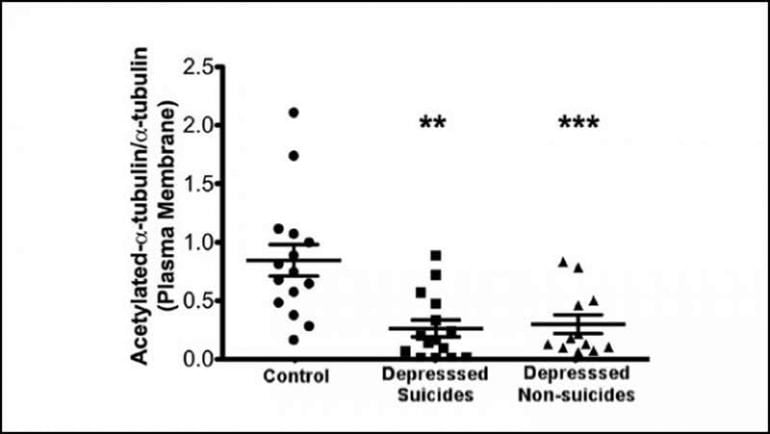 The brains of depressed people contain less modified tubulin in the plasma membrane. The image is credited to Singh et al., JNeurosci 2020.

Summary: The protein tubulin blocks molecules that trigger the production of cAMP, leading to reduced messaging in the brain. Previous studies have found those with depression have less cAMP in their brains. The findings suggest tubulin could be a potential biomarker for depression.

Scientists have zeroed in on a structural protein as a new target for the diagnosis and treatment of depression, according to research recently published in Journal of Neuroscience.

The protein tubulin provides structure to cells and assists in many cellular processes, but it also plays a role in depression. A modified form of tubulin anchors the protein Gαs to lipid rafts, fatty structures floating in the cell membrane. In depressed people, Gαs gets stuck in lipid rafts and cannot trigger the production of cAMP, a molecule necessary for quick messaging in the brain. Imaging studies have shown that people with depression have less cAMP in their brains, which is remedied after successful treatment.

Tubulin could provide a diagnostic marker of depression and a target of antidepressant treatment.

Cytoskeletal proteins and post-translational modifications play a role in mood disorders. Post-translational modifications of tubulin also alter microtubule dynamics. Furthermore, tubulin interacts closely with Gαs, the G-protein responsible for activation of adenylyl cyclase. Postmortem tissue derived from depressed suicide brain showed increased Gαs in lipid-raft domains compared to normal subjects. Gαs, when ensconced in lipid-rafts, couples less effectively with adenylyl cyclase to produce cAMP and this is reversed by antidepressant treatment. A recent in-vitro study demonstrated that tubulin anchors Gαs to lipid-rafts and that increased tubulin acetylation (due to HDAC-6 inhibition) and antidepressant treatment decreased the proportion of Gαs complexed with tubulin. This suggested that deacetylated-tubulin might be more prevalent in depression. This study, examined tubulin acetylation in whole tissue homogenate, plasma-membrane and lipid-raft membrane domains in tissue from normal control (NC) subjects, depressed suicides and depressed non-suicides (human males/females). While tissue homogenate showed no changes in tubulin acetylation between control, depressed suicides and depressed non-suicides, plasma-membrane associated tubulin showed significant decreases in acetylation from depressed-suicides and depressed-non-suicides compared to controls. No change was seen in expression of the enzymes responsible for tubulin acetylation or deacetylation. These data suggest that during depression, membrane localized tubulin maintains a lower acetylation state, permitting increased sequestration of Gαs in lipid-raft domains, where it is less likely to couple to adenylyl cyclase for cAMP production. Thus, membrane tubulin may play a role in mood disorders which could be exploited for diagnosis and treatment.

There is little understanding about the molecular mechanisms involved in the development of depression and in severe cases, suicide. Evidence for the role of microtubule modifications in progression of depressive disorders is emerging. These postmortem data provide strong evidence for membrane tubulin modification leading to reduced efficacy of the G protein, Gsα, in depression. This study reveals a direct link between decreased tubulin acetylation in human depression and the increased localization of Gαs in lipid-raft domains responsible for attenuated cAMP signaling. The evidence presented here suggest a novel diagnostic and therapeutic locus for depression.

Picky Eaters Are Put Off by Food Depending on Plateware Color