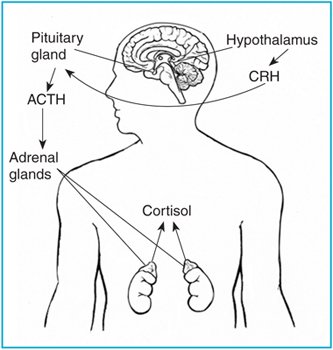 Cushing's disease is a rare disorder that is caused by pituitary tumors or excess growth of the pituitary gland located at the base of the brain. People with CD have too much ACTH, which stimulates the production and release of cortisol, a hormone that is normally produced during stressful situations.
Home
Featured

Scientists at the Salk Institute for Biological Studies have identified a protein that drives the formation of pituitary tumors in Cushing’s disease, a development that may give clinicians a therapeutic target to treat this potentially life-threatening disorder.

The protein, called TR4 (testicular orphan nuclear receptor 4), is one of the human body’s 48 nuclear receptors, a class of proteins found in cells that are responsible for sensing hormones and, in response, regulating the expression of specific genes. Using a genome scan, the Salk team discovered that TR4 regulates a gene that produces adrenocorticotropic hormone (ACTH), which is overproduced by pituitary tumors in Cushing’s disease (CD). The findings were published in the May 6, 2013 early online edition of Proceedings of the National Academy of Sciences.

“We were surprised by the scan, as TR4 and ACTH were not known to be functionally linked,” says senior author Ronald M. Evans, a professor in Salk’s Gene Expression Laboratory and a lead researcher in the Institute’s Helmsley Center for Genomic Medicine. “TR4 is driving the growth and overexpression of ACTH. Targeting this pathway could therapeutically benefit treatment of CD.”

In their study, Evans and his colleagues discovered that forced overexpression of TR4 in both human and mouse cells increased production of ACTH, cellular proliferation and tumor invasion rates. All of these events were reversed when TR4 expression was reduced.

First described more than 80 years ago, Cushing’s disease is a rare disorder that is caused by pituitary tumors or excess growth of the pituitary gland located at the base of the brain. People with CD have too much ACTH, which stimulates the production and release of cortisol, a hormone that is normally produced during stressful situations.

While these pituitary tumors are almost always benign, they result in excess ACTH and cortisol secretion, which can result in various disabling symptoms, including diabetes, hypertension, osteoporosis, obesity and psychological disturbances. Surgical removal of the tumors is the first-line therapy, with remission rates of approximately 80 percent; however, the disease recurs in up to 25 percent of cases.

Drugs such as cabergoline, which is used to treat certain pituitary tumors, alone or in combination with ketoconazole, a drug normally used to treat fungal infections, have been shown to be effective in some patients with Cushing’s disease. More recently, mefipristone-best known as the abortion pill RU-486-was approved by the FDA to treat CD. Despite these advances in medical therapy, the Salk scientists say additional therapeutic approaches are needed for CD.

“Pituitary tumors are extremely difficult to control,” says Michael Downes, a senior staff scientist in the Gene Expression Laboratory and a co-author of the study. “To control them, you have to kill cells in the pituitary gland that are proliferating, which could prevent the production of a vital hormone.”

Previous studies have found that, by itself, TR4 is a natural target for other signaling molecules in the pituitary. Small-molecule inhibitors that have been developed for other cancers could be potentially applied to disrupt this signaling cascade. “Our discovery,” says Evans, a Howard Hughes Medical Institute investigator and holder of the March of Dimes Chair in Molecular and Developmental Biology, “might lead clinicians to an existing drug that could be used to treat Cushing’s disease.

Notes about this neurogenetics and Cushing’s disease research

Other researchers on the study were Li Du, Marvin Bergsneider, Leili Mirsadraei, Stephen H. Young, William H. Yong and Anthony P. Heaney of the David A. Geffen School of Medicine at the University of California, Los Angeles, and Johan W. Jonker of the University of Groningen.

The study was supported by the National Institutes of Health, the Leona M. and Harry B. Helmsley Charitable Trust, the Samuel Waxman Cancer Research Foundation, the Jonsson Comprehensive Cancer Center at UCLA, and Ipsen/Biomeasure.