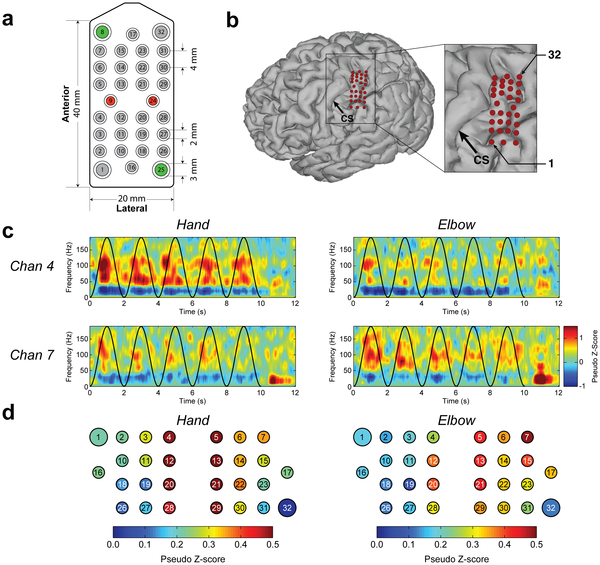 Researchers at the University of Pittsburgh School of Medicine and UPMC describe in PLoS ONE how an electrode array sitting on top of the brain enabled a 30-year-old paralyzed man to control the movement of a character on a computer screen in three dimensions with just his thoughts. It also enabled him to move a robot arm to touch a friend’s hand for the first time in the seven years since he was injured in a motorcycle accident.

With brain-computer interface (BCI) technology, the thoughts of Tim Hemmes, who sustained a spinal cord injury that left him unable to move his body below the shoulders, were interpreted by computer algorithms and translated into intended movement of a computer cursor and, later, a robot arm, explained lead investigator Wei Wang, Ph.D., assistant professor, Department of Physical Medicine and Rehabilitation, Pitt School of Medicine.

“When Tim reached out to high-five me with the robotic arm, we knew this technology had the potential to help people who cannot move their own arms achieve greater independence,” said Dr. Wang, reflecting on a memorable scene from September 2011 that was re-told in stories around the world. “It’s very important that we continue this effort to fulfill the promise we saw that day.”

Six weeks before the implantation surgery, the team conducted functional magnetic resonance imaging (fMRI) of Mr. Hemmes’ brain while he watched videos of arm movement. They used that information to place a postage stamp-size electrocortigraphy (ECoG) grid of 28 recording electrodes on the surface of the brain region that fMRI showed controlled right arm and hand movement. Wires from the device were tunneled under the skin of his neck to emerge from his chest where they could be connected to computer cables as necessary.

For 12 days at his home and nine days in the research lab, Mr. Hemmes began the testing protocol by watching a virtual arm move, which triggered neural signals that were sensed by the electrodes. Distinct signal patterns for particular observed movements were used to guide the up and down motion of a ball on a computer screen. Soon after mastering movement of the ball in two dimensions, namely up/down and right/left, he was able to also move it in/out with accuracy on a 3-dimensional display.

“During the learning process, the computer helped Tim hit his target smoothly by restricting how far off course the ball could wander,” Dr. Wang said. “We gradually took off the ‘training wheels,’ as we called it, and he was soon doing the tasks by himself with 100 percent brain control.”