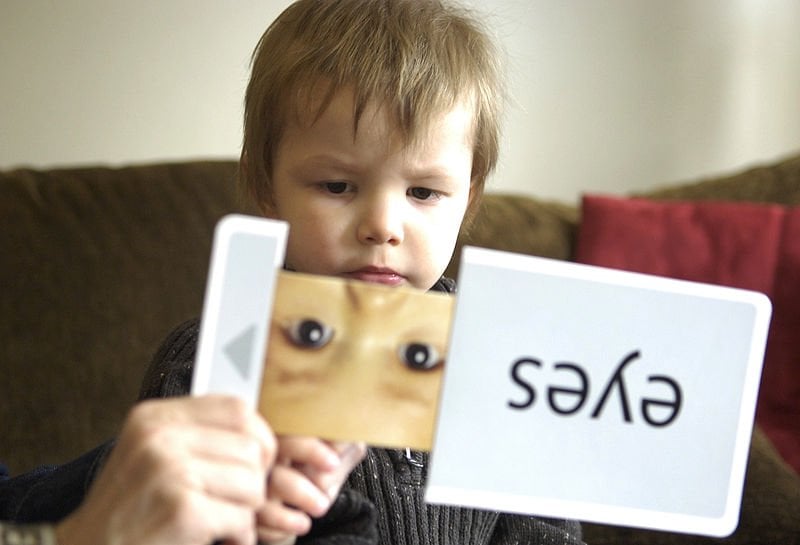 A new study reveals 70% of children diagnosed with ASD and with a history of severe language delay, achieved phrase or fluent speech by age eight. The image shows a child with ASD identifying words with flashcards during a therapy session.
Home
Autism

New findings published in Pediatrics by the Kennedy Krieger Institute’s Center for Autism and Related Disorders reveal that 70 percent of children with autism spectrum disorders (ASD) who have a history of severe language delay, achieved phrase or fluent speech by age eight. This suggests that more children presenting with ASD and severe language delay at age four can be expected to make notable language gains than was previously thought. Abnormalities in communication and language are a defining feature of ASD, yet prior research into the factors predicting the age and quality of speech attainment has been limited.

The study used the largest sample to date to examine the relationship between key deficits associated with ASD and attainment of phrase and/or fluent speech following a severe language delay, characterized by a child not putting words together into meaningful phrases by age four. As a common milestone of speech development, phrase speech is defined as using non-echoed three-word utterances that sometimes involve a verb and are spontaneous meaningful word combinations; whereas fluent speech is defined as the ability to use complex utterances to talk about topics outside of the immediate physical context.

“We found that nonverbal intelligence was the strongest predictor of phrase speech, while social interest and engagement were as robust, if not greater, when predicting the age that children attained phrase speech and fluent speech,” said Ericka L. Wodka, Ph.D., a neuropsychologist in Kennedy Krieger’s Center for Autism and Related Disorders and lead study author. “Children with typical nonverbal intelligence attained language almost six months ahead of those with scores below the average.”

These findings reinforce that core abilities, such as nonverbal intelligence and social engagement, have a greater influence on the development of communication than other behaviors associated with ASD, such as repetitive and abnormal sensory behaviors. “Our findings continue to support the importance of considering both nonverbal intellectual level and social communication in treatment planning, highlighting the differing impact of these factors as related to treatment goals,” said Dr. Wodka.

Data for this retrospective study were from the Simon Simplex Collection (SSC), a unique multi-site database project that gathers biological and phenotypic data on children with ASD aged four- to eighteen-years-old without a previous genetic history of ASD. The database establishes a permanent repository of genetic samples from 2,700 families, each of which has one child affected with an ASD and unaffected parents and siblings.

From the SSC, a total of 535 children, ages eight years or older, were studied. Using the Autism Diagnostic Interview-Revised (ADI-R), a standard parent-interview that distinguishes children with ASD from non-ASD populations, and the Autism Diagnosis Observation Schedule (ADOS), a clinician-administered observation that assesses social, communicative and stereotyped behaviors, researchers selected children because they either had no phrase speech at their time of enrollment in the SSC or their phrase speech onset occurred after age four. Based on ADI-R results and their language presentation, children in this study were administered one of four evaluation modules – no words or single words (Module 1), phrase speech (Module 2) or fluent speech (Module 3 or 4). Of the 535 participants in the study, 119 children mastered phrase speech and 253 children were speaking fluently by their eighth birthday, while 163 children never attained phrase or fluent speech.

“We hope the results of this study empower parents of children with autism and severe language delays to know that, with the appropriate therapy, a child will likely make significant gains in this area over time; however, progress should be expected to be slower for those children with lower intellectual abilities,” said Dr. Wodka. “Additionally, we hope these findings provide clinicians with better defined therapeutic targets for their patients with autism.”

Future longitudinal studies, including both simplex and multiplex families, are required to fully capture the prevalence and predictors of language development in children with ASD. Additionally, further research into the impact of social cognition strategies (e.g., perspective taking) on the development of language, as well as the relationship among specific social deficits and fluent speech development, may hold important implications to the design of intervention.