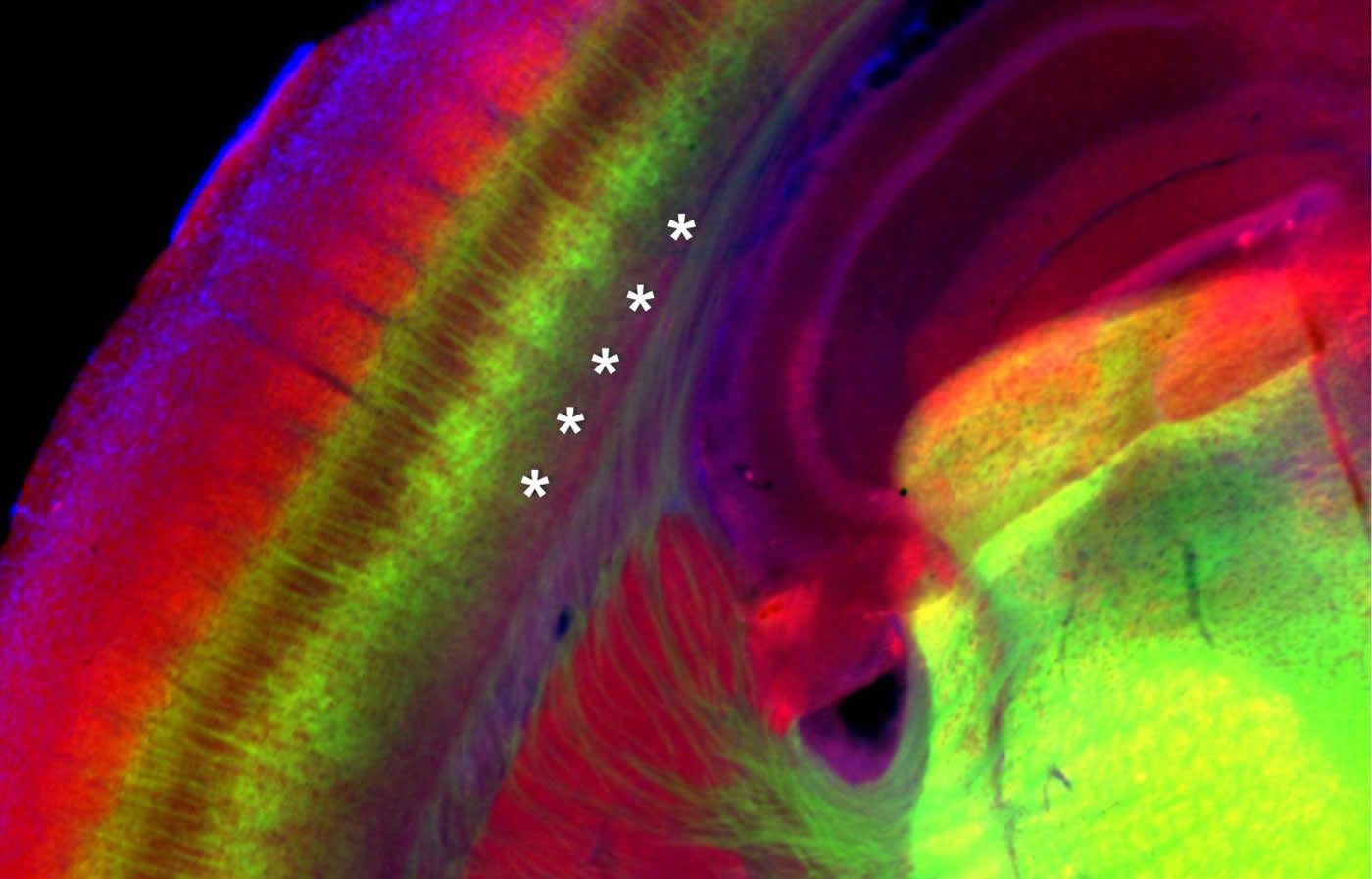 Asterisks denote the location of newly found "infrabarrels" in the innermost layer of the cortex of the mouse brain. The thalamus, which connects to the infrabarrels, is the region on the bottom right of the image. NeuroscienceNews.com image is credited to Crandall et. al.

Summary: Researchers have identified a new set of matching barrel structures two layers deeper in the cortex than whisker barrels.

Because they provide an exemplary physiological model of how the mammalian brain receives sensory information, neural structures called “mouse whisker barrels” have been the subject of study by neuroscientists around the world for nearly 50 years. A new study shows that despite all that prior scrutiny, significant discoveries remain to be made. Specifically, researchers at Brown University have found a previously unknown set of matching barrel structures two layers deeper into the cortex than the whisker barrels, providing a more complete picture of the circuitry involved in handling sensory information.

While humans don’t use whiskers to perceive their surroundings, the new findings still serve to deepen scientists’ understanding of how two brain regions — the cortex, which processes information, and the thalamus, which feeds that information to the cortex — communicate, said study senior author Barry Connors, a professor of neuroscience at Brown. The barrels discovered in 1970 in the fourth layer of the cortex were presumed to handle much of this cross-talk, and while that may still be true, the finding of parallel “infrabarrels” in the sixth layer suggests that the layer closest to the thalamus may play a greater role than previously realized.

“There is a good chance that these infrabarrels reveal a kind of circuit architecture that wasn’t appreciated before,” Connors said.

It’s vital to understand these circuits given how important cortex-governed behaviors such as sensory processing and attention are, added lead author Shane Crandall, a former Brown postdoctoral scholar who is now an assistant professor at Michigan State University. This has proven difficult — even in the well-studied whisker barrel system — because of the immense diversity of cells in cortical layers.

“Our study focused on the deepest and perhaps the most mysterious layer of the neocortex, layer six,” Crandall said. “Our results reveal discrete neocortical circuit modules specialized for linking long-distance inputs with specific outputs, thus providing a framework for understanding the functional organization of layer six.”

What makes the brain science behind mouse whiskers so compelling to scientists is that it is so well organized, Connors said. Each whisker connects into a distinct circuit that can be cleanly traced through the brainstem, into the thalamus, and into an exact mapping in which each barrel in layer four corresponds to single whisker. But more generally in humans and mice alike, there is a map of neurons in the cortex for sensations from all over the body. The cells in the somatosensory cortex that process touch in a person’s right pinky, for example, are specific and different than the cells that process sensation in the left elbow. Meanwhile, just as these cells take in information from the thalamus, many more cells send messages from the cortex back to the thalamus, Connors said, perhaps to manage the cortex’s attention to all this incoming sensory information.

A new set of barrels

In the new study, Connors, Crandall and co-authors sought to understand how cells in layer six were organized and whether they had a role in this cross-talk. To do that, they used mice that were genetically engineered to express different fluorescing proteins in very specific cell types. For example, they were able to get “corticothalamic” (CT) neurons — ones that project from the cortex to the thalamus — in layer six to light up yellow.

When they did that, they saw that those CT neurons were tightly grouped into structures that were not only very similar to the famous barrels in layer four (which they made to glow red) but also directly below them in columns of circuitry that extend across all the layers of the cortex.

They continued their investigation of layer six neurons using the technique of optogenetics — in which specific neurons can be engineered to become activated or suppressed by pulses of visible light. The technology allowed them to stimulate different cells in the thalamus to see which neurons those cells might excite in layer six. They found that while the thalamic neurons did not have much effect at all on the CT neurons, they excited many of the neurons bunched into the spaces between the layer six infrabarrels. These neurons communicate within the cortex and are therefore called corticocortical (CC) neurons.

One of the next questions Crandall now wants to ask is which other cells in the cortex these CC cells that receive direct thalamic input may be “talking” to.

In addition to Crandall and Connors, the paper’s other authors are Saundra Patrick and Scott Cruikshank.

Keys to Keeping Your Brain Healthy