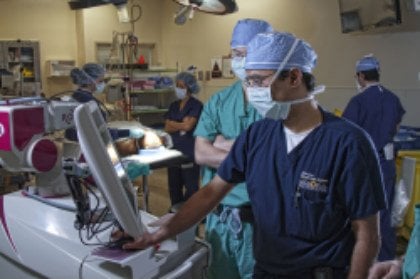 UTHealth neurosurgeon Nitin Tandon, M.D., and his colleagues have successfully demonstrated a technique to enhance a form of self-control through a novel form of brain stimulation. Credit Memorial Hermann-Texas Medical Center.

If you have ever said or done the wrong thing at the wrong time, you should read this. Neuroscientists at The University of Texas Health Science Center at Houston (UTHealth) and the University of California, San Diego, have successfully demonstrated a technique to enhance a form of self-control through a novel form of brain stimulation.

Study participants were asked to perform a simple behavioral task that required the braking/slowing of action – inhibition – in the brain. In each participant, the researchers first identified the specific location for this brake in the prefrontal region of the brain. Next, they increased activity in this brain region using stimulation with brief and imperceptible electrical charges. This led to increased braking – a form of enhanced self-control.

This proof-of-principle study appears in the Dec. 11 issue of The Journal of Neuroscience and its methods may one day be useful for treating attention deficit hyperactivity disorder (ADHD), Tourette’s syndrome and other severe disorders of self-control.

“There is a circuit in the brain for inhibiting or braking responses,” said Nitin Tandon, M.D., the study’s senior author and associate professor in The Vivian L. Smith Department of Neurosurgery at the UTHealth Medical School. “We believe we are the first to show that we can enhance this braking system with brain stimulation.”

A computer stimulated the prefrontal cortex exactly when braking was needed. This was done using electrodes implanted directly on the brain surface.

When the test was repeated with stimulation of a brain region outside the prefrontal cortex, there was no effect on behavior, showing the effect to be specific to the prefrontal braking system.

This was a double-blind study, meaning that participants and scientists did not know when or where the charges were being administered.

The study involved four volunteers with epilepsy who agreed to participate while being monitored for seizures at the Mischer Neuroscience Institute at Memorial Hermann-Texas Medical Center (TMC). Stimulation enhanced braking in all four participants.

Tandon has been working on self-control research with researchers at the University of California, San Diego, for five years. “Our daily life is full of occasions when one must inhibit responses. For example, one must stop speaking when it’s inappropriate to the social context and stop oneself from reaching for extra candy,” said Tandon, who is a neurosurgeon with the Mischer Neuroscience Institute at Memorial Hermann-TMC.

The researchers are quick to point out that while their results are promising, they do not yet point to the ability to improve self-control in general. In particular, this study does not show that direct electrical stimulation is a realistic option for treating human self-control disorders such as obsessive-compulsive disorder, Tourette’s syndrome and borderline personality disorder. Notably, direct electrical stimulation requires an invasive surgical procedure, which is now used only for the localization and treatment of severe epilepsy.