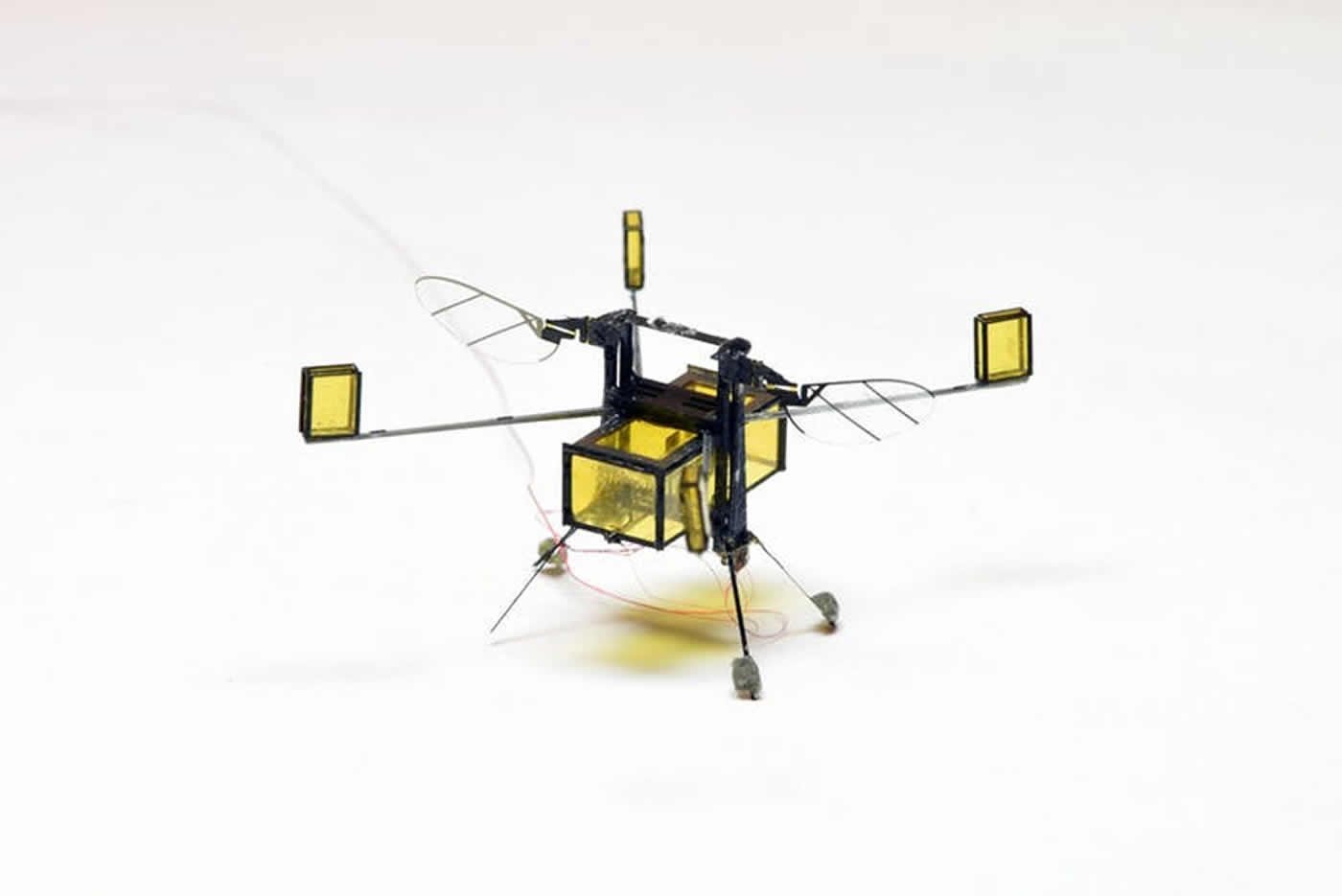 New RoboBee Flies, Dives, Swims and Explodes Out of the Water

Summary: The latest generation of the RoboBee hybrid robot could help monitor the environment and provide essential search and rescue assistance, researchers report.

New floating devices allow this multipurpose air-water microrobot to stabilize on the water’s surface before an internal combustion system ignites to propel it back into the air.

This latest-generation RoboBee, which is 1,000 times lighter than any previous aerial-to-aquatic robot, could be used for numerous applications, from search-and-rescue operations to environmental monitoring and biological studies.

The research is described in Science Robotics. It was led by a team of scientists from the Wyss Institute for Biologically Inspired Engineering at Harvard University and the Harvard John A. Paulson School of Engineering and Applied Sciences (SEAS).

“This is the first microrobot capable of repeatedly moving in and through complex environments,” says Yufeng Chen, Ph.D., currently a Postdoctoral Fellow at the Wyss Institute who was a graduate student in the Microrobotics Lab at SEAS when the research was conducted and is the first author of the paper. “We designed new mechanisms that allow the vehicle to directly transition from water to air, something that is beyond what nature can achieve in the insect world.”

Designing a millimeter-sized robot that moves in and out of water has numerous challenges. First, water is 1,000 times denser than air, so the robot’s wing flapping speed will vary widely between the two mediums. If the flapping frequency is too low, the RoboBee can’t fly. If it’s too high, the wing will snap off in the water.

By combining theoretical modeling and experimental data, the researchers found the Goldilocks combination of wing size and flapping rate, scaling the design to allow the bee to operate repeatedly in both air and water. Using this multimodal locomotive strategy, the robot to flaps its wings at 220 to 300 hertz in air and nine to 13 hertz in water.

Another major challenge the team had to address: at the millimeter scale, the water’s surface might as well be a brick wall. Surface tension is more than 10 times the weight of the RoboBee and three times its maximum lift. Previous research demonstrated how impact and sharp edges can break the surface tension of water to facilitate the RoboBee’s entry, but the question remained: How does it get back out again?

To solve that problem, the researchers retrofitted the RoboBee with four buoyant outriggers — essentially robotic floaties — and a central gas collection chamber. Once the RoboBee swims to the surface, an electrolytic plate in the chamber converts water into oxyhydrogen, a combustible gas fuel.

“Because the RoboBee has a limited payload capacity, it cannot carry its own fuel, so we had to come up with a creative solution to exploit resources from the environment,” says Elizabeth Farrell Helbling, graduate student in the Microrobotics Lab and co-author of the paper. “Surface tension is something that we have to overcome to get out of the water, but is also a tool that we can utilize during the gas collection process.”

The gas increases the robot’s buoyancy, pushing the wings out of the water, and the floaties stabilize the RoboBee on the water’s surface. From there, a tiny, novel sparker inside the chamber ignites the gas, propelling the RoboBee out of the water. The robot is designed to passively stabilize in air, so that it always lands on its feet.

“By modifying the vehicle design, we are now able to lift more than three times the payload of the previous RoboBee,” says Chen. “This additional payload capacity allowed us to carry the additional devices including the gas chamber, the electrolytic plates, sparker, and buoyant outriggers, bringing the total weight of the hybrid robot to 175 miligrams, about 90mg heavier than previous designs. We hope that our work investigating tradeoffs like weight and surface tension can inspire future multi-functional microrobots – ones that can move on complex terrains and perform a variety of tasks.”

Because of the lack of onboard sensors and limitations in the current motion-tracking system, the RoboBee cannot yet fly immediately upon propulsion out of water but the team hopes to change that in future research.

“The RoboBee represents a platform where forces are different than what we – at human scale – are used to experiencing,” says Wyss Core Faculty Member Robert Wood, Ph.D., who is also the Charles River Professor of Engineering and Applied Sciences at Harvard and senior author of the paper. “While flying the robot feels as if it is treading water; while swimming it feels like it is surrounded by molasses. The force from surface tension feels like an impenetrable wall. These small robots give us the opportunity to explore these non-intuitive phenomena in a very rich way.”

Funding: It was supported by the National Science Foundation and the Wyss Institute for Biologically Inspired Engineering.

From millimeter-scale insects to meter-scale vertebrates, several animal species exhibit multimodal locomotive capabilities in aerial and aquatic environments. To develop robots capable of hybrid aerial and aquatic locomotion, we require versatile propulsive strategies that reconcile the different physical constraints of airborne and aquatic environments. Furthermore, transitioning between aerial and aquatic environments poses substantial challenges at the scale of microrobots, where interfacial surface tension can be substantial relative to the weight and forces produced by the animal/robot. We report the design and operation of an insect-scale robot capable of flying, swimming, and transitioning between air and water. This 175-milligram robot uses a multimodal flapping strategy to efficiently locomote in both fluids. Once the robot swims to the water surface, lightweight electrolytic plates produce oxyhydrogen from the surrounding water that is collected by a buoyancy chamber. Increased buoyancy force from this electrochemical reaction gradually pushes the wings out of the water while the robot maintains upright stability by exploiting surface tension. A sparker ignites the oxyhydrogen, and the robot impulsively takes off from the water surface. This work analyzes the dynamics of flapping locomotion in an aquatic environment, identifies the challenges and benefits of surface tension effects on microrobots, and further develops a suite of new mesoscale devices that culminate in a hybrid, aerial-aquatic microrobot.