Philosophy of the Mind: In Touch with Reality

Summary: According to a new study, we trust our fingertips over our eye when it comes to processing ambiguous information.

Every year, museums bear the cost of repairing the damage caused to their artworks by visitors touching them. Why would people want to touch objects they can clearly see? What is it that touch provides that vision does not?

Philosophers, starting with René Descartes, all noted that touch provided ‘a sense of reality’, and made us feel in contact with the external world. By contrast, psychologists have tended to assume that touch has no intrinsic superiority over the other senses.

Our tendency to ‘fact check’ by touch is common, but remains unexplained: from the biblical account of the doubting apostle Thomas, we now see a ‘Thomas effect’ in cell phones and other new technologies, where people still prefer to press buttons than simply select items on a screen, and in retail where stores let people touch products. In clinical studies, compulsive patients tend to check taps or locks by touch, even though they can see they are closed.

Now an interdisciplinary group of researchers based at LMU and the School of Advanced Study (SAS), University of London, published the first scientific evidence that when faced with ambiguous information we trust our fingertips more than our eyes. The report is available in Nature Scientific Reports.

In the study they used a perceptual illusion – the ‘vertical-horizontal’ illusion – that affects both how we see shapes and how we feel them. In this, two matchsticks form an inverted T-shape. When the two matches are equal in length, the vertical match both looks and feels longer than the horizontal one. Participants were tested on a range of lengths: some where the matches seemed close in length, and some where one clearly seemed longer than the other. They were better at judging the length of the matches by sight than by touch, and unsurprisingly they were usually more confident when relying on sight as well. Crucially though, when the lengths were difficult to judge, and participants were effectively guessing, they guessed with more confidence when touching the objects than when seeing them. 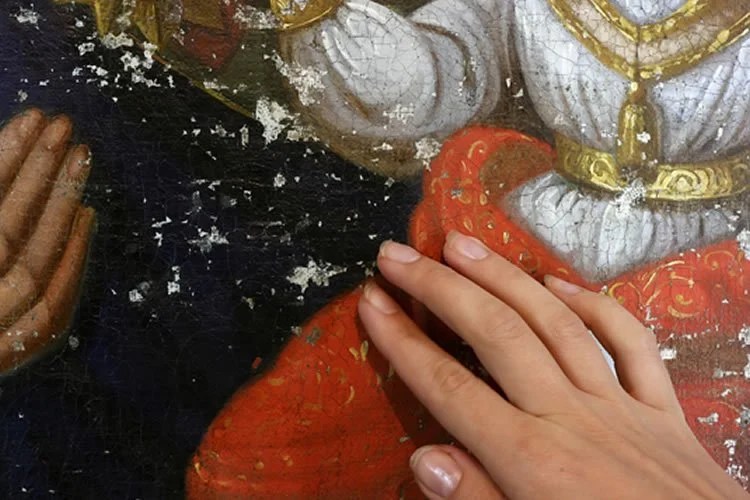 The results suggest that the possible origins of tactile fact-checking, in everyday life or in compulsive disorders, is not just the need to have a second kind of ‘sanity check’ on reality but comes from the specific kind of reassurance that touch gives.NeuroscienceNews.com image is adapted from the LMU news release.

“From our data, it seems that, when the context is ambiguous, our sense of touch does something beyond providing us with accurate information – it gives us a sense of certainty – a tighter grip on reality”, says cognitive neuroscientist, Merle Fairhurst, Assistant Professor in the Philosophy of Mind and Cognitive Neuroscience group at LMU.

“Making sense of the special status of touch looks incredibly difficult for modern neuroscience. Touch after all, is like other senses: It is good sometimes, bad at others, and it all depends on the context and task. What we show here is not that it is better or more accurate than the other senses, but that it makes us feel better. This shows Descartes was right, when he said that touch was the most difficult sense to doubt,” says Professor Ophelia Deroy, Chair in Philosophy of Mind at LMU and one of the co-authors of the study.

The results suggest that the possible origins of tactile fact-checking, in everyday life or in compulsive disorders, is not just the need to have a second kind of ‘sanity check’ on reality but comes from the specific kind of reassurance that touch gives. Seeing, as the expression goes, may be believing, but feeling is truth.

The inclination to touch objects that we can see is a surprising behaviour, given that vision often supplies relevant and sufficiently accurate sensory evidence. Here we suggest that this ‘fact-checking’ phenomenon could be explained if touch provides a higher level of perceptual certainty than vision. Testing this hypothesis, observers explored inverted T-shaped stimuli eliciting the Vertical-horizontal illusion in vision and touch, which included clear-cut and ambiguous cases. In separate blocks, observers judged whether the vertical bar was shorter or longer than the horizontal bar and rated the confidence in their judgments. Decisions reached by vision were objectively more accurate than those reached by touch with higher overall confidence ratings. However, while confidence was higher for vision rather than for touch in clear-cut cases, observers were more confident in touch when the stimuli were ambiguous. This relative bias as a function of ambiguity qualifies the view that confidence tracks objective accuracy and uses a comparable mapping across sensory modalities. Employing a perceptual illusion, our method disentangles objective and subjective accuracy showing how the latter is tracked by confidence and point towards possible origins for ‘fact checking’ by touch.