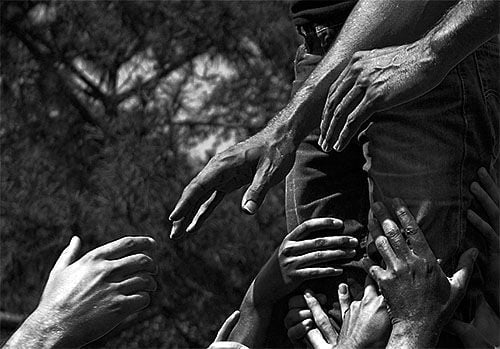 Neuroscientists have provided an insight into the neuronal mechanisms involved in prosocial behavior, and how they are modulated by perceived group membership. Researchers suggest that there is a neurobiological basis of whether people chose to help, or withdraw help, based on positive or negative identification of the person in pain.

A new study reveals that brain signals elicited by the sight of someone suffering pain differ as a function of whether we identify positively or negatively with that person and that these differential brain signals predict a later decision to help or withdraw from helping. The research, published by Cell Press in the October 7th issue of the journal Neuron,provides fascinating insight into the neural mechanisms involved in decisions that benefit others, known as prosocial behavior, and how they are modulated by perceived group membership.

Dr. Tania Singer from the University of Zurich and now director at the Max Planck Institute for Human Cognition and Brain Science in Leipzig along with Dr. Grit Hein led a study where soccer fans witnessed a fan of their favorite team (the “ingroup” member) or of a rival team (the “outgroup” member) experience pain. The participants were then asked to choose to help the other by enduring physical pain themselves to reduce the other’s pain. “We were interested in investigating whether brain responses elicited by witnessing another suffering pain are modulated by perceived group membership and how these brain responses are related to the prediction of costly helping – or lack of helping – towards ingroup- and outgroup members later on,” explains Dr. Singer.

Using functional magnetic resonance imaging (fMRI), Dr. Singer’s group observed that helping the ingroup individual was best predicted by activation of an area of the brain called the anterior insula while observing the suffering of the ingroup member and by associated self-reports of empathic concern. Alternately, not helping the outgroup individual was best predicted by activation of a brain structure called the nucleus accumbens and the magnitude of negative evaluation of the outgroup member. Previous work by Dr. Singer and other colleagues using similar paradigms had linked the anterior insula with empathy for pain and the nucleus accumbens with a desire for revenge and “Schadenfreude”, pleasure derived from the misfortune of others.

The researchers concluded that empathy-associated activation of the anterior insula motivated costly helping, whereas a signal in the nucleus accumbens, a brain area related to reward processing, reduced the propensity to help. “Our study identified two neurobiological processes associated with decisions to help or withdraw from prosocial behavior, and provided a neurobiologically informed account of ingroup favoritism in prosocial behavior,” says Dr. Hein. “Furthermore, it demonstrates the reliability of imaging data in predicting later behavior, especially in socially sensitive situations such as when participants are deciding to refrain from helping an outgroup member.”