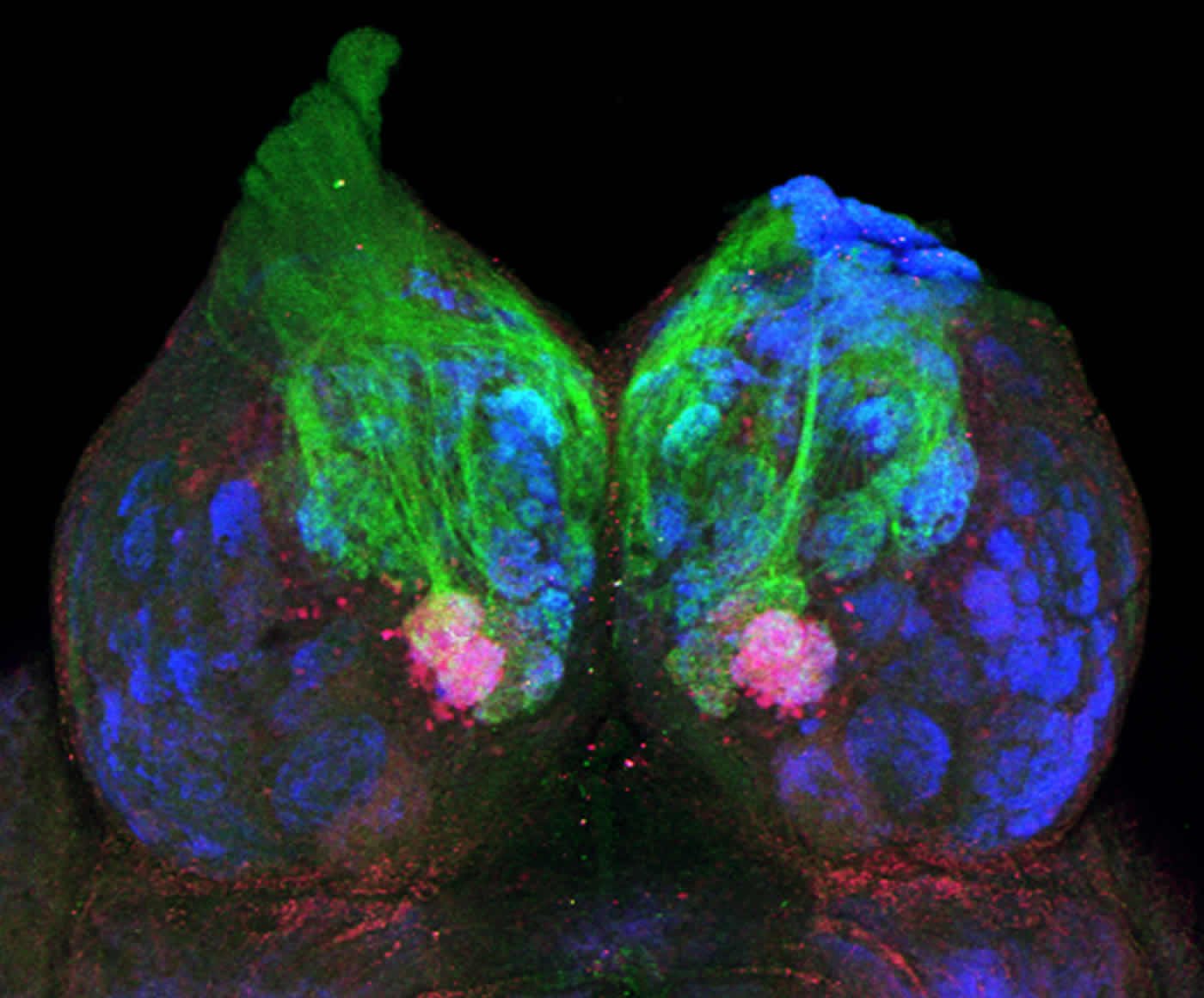 Summary: A pheromone released by female zebrafish is sensed by the olfactory receptors of males, a new study reports.

Research at the RIKEN Brain Science Institute in Japan has revealed that a molecule involved in fish reproduction activates the brain via the nose. The pheromone is released by female zebrafish and sensed by smell receptors in the noses of the males. The neural pathway and brain areas involved in transforming this molecular messenger into courtship behavior in fish were also identified and reported in Nature Neuroscience on May 30.

Prostaglandin F2α (PGF2α) is a reproductive hormone in female fish and mammals that is involved in ovulation and uterine contraction. In fish, it is also pheromone–a social and sexual signaling molecule used to attract the opposite sex–that is secreted by females in their urine. Males will normally swim toward even small concentrations of the molecule, but the researchers, led by Yoshihiro Yoshihara, found that male fish without a sense of smell were indifferent when PGF2α was added to their tank.

PGF2α synchronizes reproductive behaviors between female and male zebrafish, but how this happens was unknown. Having confirmed that sensory tissue responsible for smelling was needed for males to sense PGF2α, researchers then found that the only type of neurons activated by it are ciliated olfactory sensory neurons. The team then searched for the receptor within these neurons that detects PGF2α.

The researchers also found that through these olfactory receptors, PGF2α activates a direct, dedicated neural pathway to the areas of the brain that are responsible for eliciting courtship behavior in male fish. The ciliated olfactory sensory neurons send their signals to specific regions called glomeruli in the olfactory bulb of the brain, which in turn relay them to distinct forebrain areas. This “labeled line”, in which circuits only transmit information about particular stimuli from a limited number of receptors, is also how the sense of taste functions. Hardwired pathways like this are common for innate behaviors, says Yoshihara, and it may have been an evolutionary accident that the PGF2α molecule was well-matched to certain olfactory receptors, facilitating the use of the “smell pathway” for reproductive purposes.

Finally, the researchers tested the response to PGF2α in male fish that were lacking the genes for one of the olfactory receptors they had identified. These fish weren’t drawn to PGF2α in their tank, spent less time chasing female fish, and were less successful at spawning. A smell receptor thus seems to be the gateway for PGF2α into the male fish brain. Pheromone signaling works hand in hand with other senses like vision to bring about the courtship dance that increases a fish’s chances of mating.

Pheromones play vital roles in various organisms for survival and reproduction in various organisms. In many fishes, prostaglandin F2α acts not only as a female reproductive hormone, facilitating ovulation and spawning, but also as a sex pheromone inducing male reproductive behaviors. Here, we unravel the molecular and neural circuit mechanisms underlying the pheromonal action of prostaglandin F2α in zebrafish. Prostaglandin F2α specifically activates two olfactory receptors with different sensitivities and expression in distinct populations of ciliated olfactory sensory neurons. Pheromone information is then transmitted to two ventromedial glomeruli in the olfactory bulb and further to four regions in higher olfactory centers. Mutant male zebrafish deficient in the high-affinity receptor exhibit loss of attractive response to prostaglandin F2α and impairment of courtship behaviors toward female fish. These findings demonstrate the functional significance and activation of selective neural circuitry for the sex pheromone prostaglandin F2α and its cognate olfactory receptor in fish reproductive behavior.