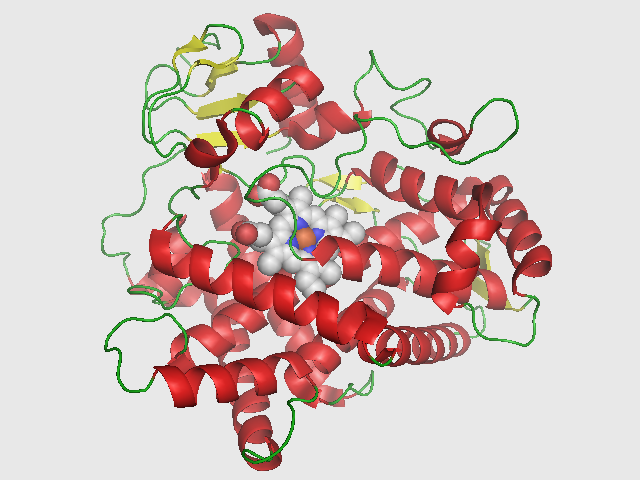 The image shown is a 3-D rendering of the Cytochrome P450 2D6 structure. Credited to BorisTM
Home
Featured

With a new insight into a model of Parkinson’s disease, researchers from the University of Pennsylvania School of Veterinary Medicine have identified a novel target for mitigating some of the disease’s toll on the brain.

To study Parkinson’s, researchers have commonly mimicked the effects of the disease in animals by giving them a compound known as MPTP, a contaminant of the illicit drug MPPP, or synthetic heroin. MPTP causes damage to brain cells that respond to the neurotransmitter dopamine, leading to problems in muscle control, including tremors and difficulty walking.

The common understanding of MPTP’s mechanism was that it entered the brain and was eventually converted to the toxic compound MPP+ by the enzyme MAO-B, which is located on the mitochondria of non-dopaminergic (or dopamine-sensitive) neurons. Scientists believed MPP+ was carried by the action of specific transporters into dopaminergic neurons, where it inhibited mitochondrial function and led to cell death.

In the new study, published in the Journal of Biological Chemistry, the Penn-led team turned its attention to yet another molecule, known as mitochondrial CYP2D6, which until recently has been largely uninvestigated. Previous studies in the investigators’ laboratory showed that CYP2D6, a protein that is predominantly localized to cells’ endoplasmic reticulum, was also targeted to their mitochondria.

Unlike MAO-B, the endoplasmic reticulum-associated CYP2D6 was thought to have a protective effect against MPTP toxicity. The authors now show that mitochondrial CYP2D6 can effectively metabolize MPTP to toxic MPP+, indicating a possible connection between mitochondrial CYP2D6 and Parkinson’s.

“About 80 percent of the human population has only one copy of CYP2D6, but the other 20 percent has variant forms of it and some populations have multiple copies,” Avadhani said. “In those people, the activity of mitochondrial CYP2D6 can be high, and there have been correlations between these variants and the incidence of Parkinson’s disease.”

Working with primary neuronal cells in culture, the researchers showed that mitochondrial CYP2D6 could actively oxidize MPTP to MPP+. When they introduced compounds that selectively inhibited the activity of CYP2D6, this conversion process was largely halted. Neuronal degeneration was also greatly reduced.

“If we add MPTP to dopamine-sensitive neurons and also add a CYP2D6 inhibitor, we see marked protection of the neuronal function,” Avadhani said. “We believe this is a paradigm shift in how we think about the mechanism of Parkinson’s.”

A number of MAO-B inhibitors used in the clinical setting for treating Parkinson’s disease have unwanted side effects. A mitochondrial CYP2D6 inhibitor represents a much more specific and direct target and may thus cause fewer troublesome side effects.

To take the next step with this finding, Avadhani and his colleagues are developing an animal model and using stem cells to confirm the significance of mitochondrial CYP2D6’s role in the development of Parkinson’s symptoms.

Notes about this Parkinson’s disease article

The study was supported by National Institutes of Health and the Harriet Ellison Woodward Endowment.