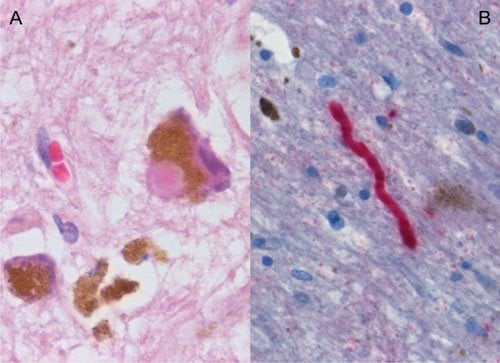 New research published in Nature Genetics suggests that there is a genetic component for late-onset Parkinson’s disease. The gene which is located in the HLA, a region which contains a large number of genes related to immune system function, is strongly linked to late-onset Parkinson’s disease. The finding could assist in developing new therapies to combat the neurodegenerative disease.

A hunt throughout the human genome for variants associated with common, late-onset Parkinson’s disease has revealed a new genetic link that implicates the immune system and offers new targets for drug development.

The long-term study involved a global consortium, including Johns Hopkins researchers from the Center for Inherited Disease Research who performed genome-wide association studies on more than 4,000 DNA samples half from unrelated patients with Parkinson’s and half from healthy “controls.” The team confirmed that a gene in the human leukocyte antigen (HLA) region was strongly linked with Parkinson’s disease; this region contains a large number of genes related to immune system function.

The new data, published August 17 in Nature Genetics, bolster previous studies that hinted about a role for infections, inflammation and autoimmunity in Parkinson’s disease. This genetic finding demonstrates that inflammation isn’t simply a result of having the disease, but somehow is involved as a player in its origin.

“This is an exciting finding from a genome-wide association study (GWAS) which is completely hypothesis-independent and bias-free, based solely on looking at the whole genome and finding out what genes might be related to Parkinson’s,” says Kimberly Doheny, Ph.D., assistant professor, McKusick-Nathans Institute of Genetic Medicine, Johns Hopkins University School of Medicine; assistant director of the Center for Inherited Disease Research (CIDR); and director of the CIDR Genotyping Lab, Johns Hopkins University.

It was long believed that common, late-onset Parkinson’s had no genetic components that environmental factors were the exclusive cause. Since genes were first implicated almost two decades ago, Parkinson’s has proven itself a “tough nut to crack,” Doheny says, adding that a handful of GWAS done prior to this one revealed nothing new other than to confirm genes that previously had been found to confer risk.

It took 18 years to build the study, according to Payami, at whose insistence the collection of DNA and clinical information was standardized using the most rigorous research criteria. Patients from whom samples were taken were tracked for at least a dozen years after their initial diagnoses to assure that they indeed had Parkinson’s, Payami adds, explaining that about 20 percent of PD patients’ diagnoses are actually misdiagnoses.

A neurodegenerative disease affecting between 1 and 2 percent of people over the age of 65, Parkinson’s disease can be difficult to diagnose as no definitive test exists. Its symptoms, which include tremors, sluggish movement, muscle stiffness and difficulty with balance, can be caused by many other things, including other neurological disorders, toxins and even medications.

The GWAS itself took about four months, Doheny says, and cost about $400 per sample tested; whole-genome sequencing costs about $10,000 per sample.

Since 1996, CIDR has provided high-quality genotyping services and statistical genetics consultation to gene hunters: researchers who are working to discover genes that contribute to common diseases by ferreting out variants in the genome. Its role in the Parkinson’s study was to assure that the genotyping dataset was of high quality, that data cleaning was done appropriately and that association analysis was stringent.

“We now have another window into what may be going on in Parkinson’s,” Payami says. “This finding anchors the idea of immune system involvement in genetics and brings it out to the forefront in terms of where research should be directed.”

Non-steroidal anti-inflammatory drugs (NSAIDs) such as ibuprofen are protective against Parkinson’s disease, according to the study. However, not everyone benefits from them to the same degree. The amount of risk reduction conferred by NSAIDs may vary widely depending on genetic differences, say the researchers. Investigating the connection between Parkinson’s disease and inflammation, especially in the context of the variable genetic make-ups of individuals, likely would lead to better, more selective medicines for treatment.