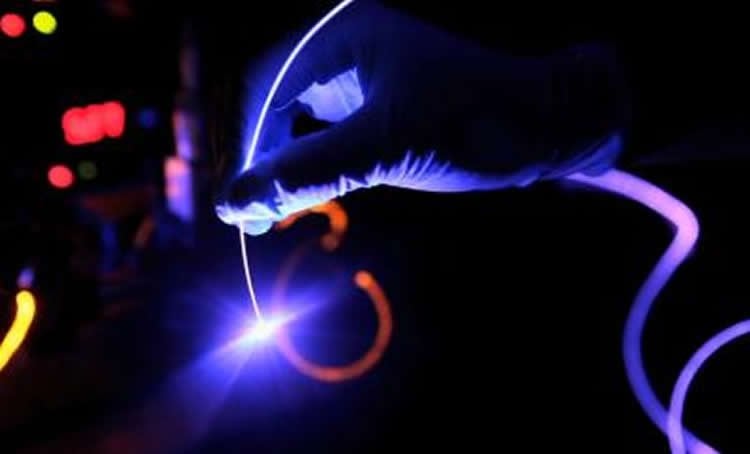 Using pulses of blue light in a type of brain cell in the sensory neocortex generated a gamma rhythm that made mice more touch sensitive. Credit Micheal Cohea/Brown University.

By striking up the right rhythm in the right brain region at the right time, Brown University neuroscientists report in Nature Neuroscience that they managed to endow mice with greater touch sensitivity than other mice, making hard-to-perceive vibrations suddenly more vivid to them.

The findings offer the first direct evidence that “gamma” brainwaves in the cortex affect perception and attention. With only correlations and associations as evidence before, neuroscientists have argued for years about whether gamma has an important role or whether it’s merely a byproduct — an “exhaust fume” in the words of one — of such brain activity.

“There’s a lot of excitement about the importance of gamma rhythms in behavior, as well as a lot of skepticism,” said co-lead author Joshua Siegle, a former graduate student at Brown University and MIT, who is now at the Allen Institute for Neuroscience. “Rather than try to correlate changes in gamma rhythms with changes in behavior, which is what researchers have done in the past, we chose to directly control the cells that produce gamma.”

The result was a mouse with whiskers that were about 20 percent more sensitive.

“There were a lot of ways this experiment could have failed but instead to our surprise it was pretty decisive from the very first subject we looked at — that under certain conditions we can make a super-perceiving mouse,” said Christopher Moore, associate professor of neuroscience at Brown and senior author of the study. “We’re making a mouse do better than a mouse could have done otherwise.”

Specifically, Moore and co-first authors Siegle and Dominique Pritchett performed their experiments by using optogenetics — a technique of using light to control the firing patterns of neurons — to generate a gamma rhythm by manipulating inhibitory interneurons in the primary sensory neocortex of mice. That part of the brain controls a mouse’s ability to detect faint sensations via its whiskers.

A different part of the brain handles stronger, more imposing sensations, Moore said. The primary sensory neocortex, a particular feature of mammals, has the distinction of allowing an animal to purposely pay attention to more subtle sensations. It’s the difference between the feeling of gently brushing a fingertip along a wood board to assess if it needs a bit more sanding and the feeling of dropping the wood board on a foot.

Before anything else in the paper, the researchers confirmed that mice naturally produce a 40-hertz gamma rhythm in their sensory neocortex sometimes. Then they optogenetically generated that gamma rhythm with precise pulses of blue light. Mice with this rhythm could more often detect the fainter vibrations the researchers supplied to their whiskers than could mice who did not have the rhythm going in their brains.

Control and optogenetically stimulated mice alike had been conditioned to indicated their detection of a supplied stimulus by licking a water bottle. The vibrations provided to the mice to sense covered a span of 17 different levels of detectability.

The team’s hypothesis was that the gamma rhythm of the stimulated neurons, because they inhibit the transmission of sensation messages by pyramidal neurons in the neocortex with a structured periodicity, actually orders the pyramidal messages into a more coherent and therefore stronger train.

“It’s not surprising that these synchronized bursts of activity can benefit signal transmission, in the same way that synchronized clapping in a crowd of people is louder than random clapping,” Siegle said.

This idea suggested that the timing of the rhythm matters.

So in another experiment, Siegle, Pritchett, and Moore varied the onset of the gamma rhythm by increments of 5 milliseconds to see whether it made a difference to perception. It did. The mice showed their increased sensitivity only so long as the gamma rhythms were underway 20-25 milliseconds before the subtle sensations were presented. If they weren’t, the mice experienced on average no impact on sensitivity.

One of the key implications from the findings for neuroscience, Moore said, is that the way gamma rhythms appear to structure the processing of perception is more important than the mere firing rate of neurons in the sensory neocortex. Mice became better able to feel not because neurons became more active (they didn’t), but because they were entrained by a precisely timed rhythm.

Although the study provides causal evidence of a functional importance for gamma rhythms, Moore acknowledged, it still leaves open important questions. The exact mechanism by which gamma rhythms affect sensation processing and attention are not proved, only hypothesized.

And in one experiment, optogenetically stimulated mice appeared less able to detect the most obvious and imposing of the sensations, even as they became more sensitive to the more subtle ones. In other experiments, however, their detection of major sensations was not compromised.

But the possible loss of sensitivity to stimuli that are easier to feel could be consistent with a shifting of attention to fainter ones, said Pritchett, also a former Brown and MIT student now at the Champalimaud Centre for the Unknown in Lisbon, Portugal.

“What we are showing is that, paradoxically, the rhythmic inhibitory input works to amplify threshold stimuli, possibly at the expense of salient stimuli,” he said. “This is precisely what you would expect from a mechanism that might be responsible for selective attention in the brain.”

Therefore, Siegle, Pritchett, and Moore say they do have a better feel now for what’s going on in the brain.

The National Institutes of Health funded the research.