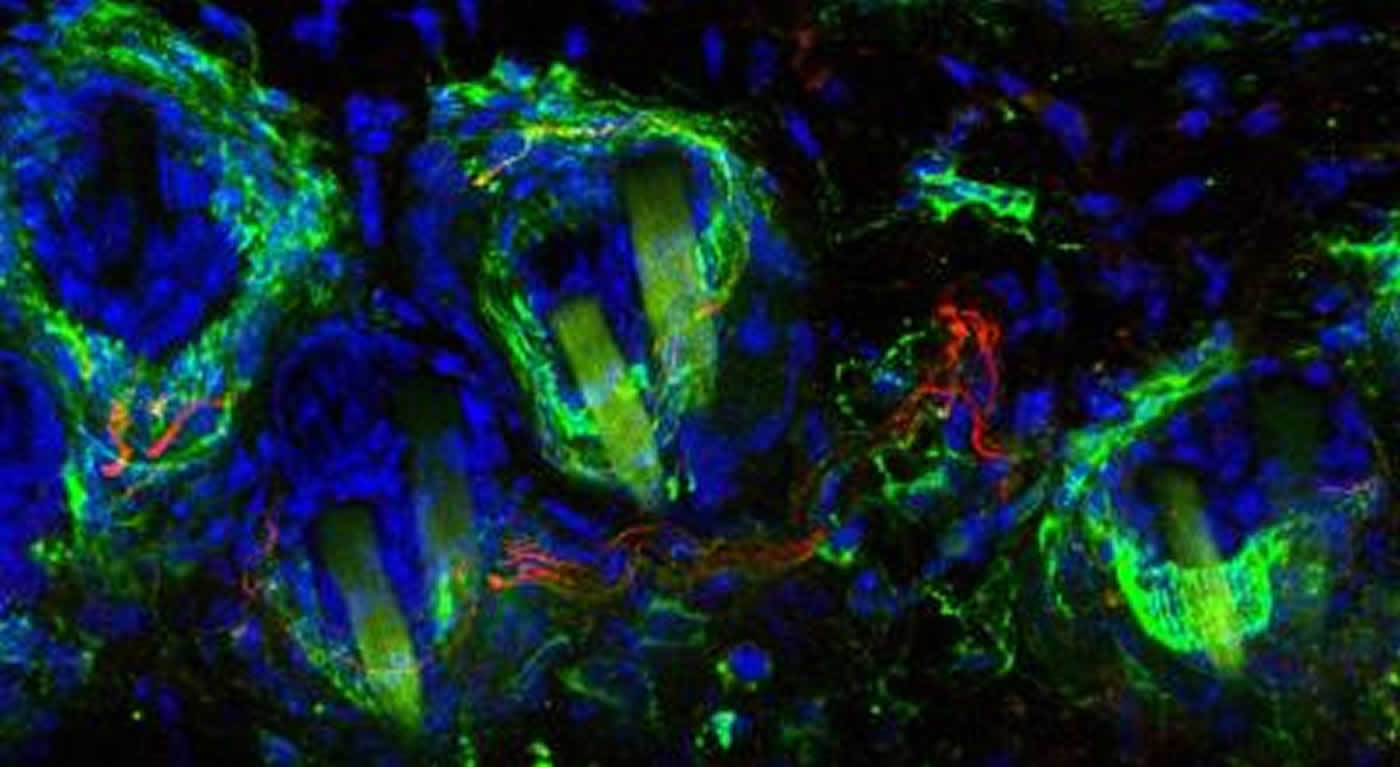 Hairy skin of a mouse, with the nerve cells that are responsible for sensitivity to gentle touch in green. The neurons are located around the hair follicles (in light green). NeuroscienceNews.com image is credited to Dhandapani et al., Nature Communications.

Imagine that the movement of a single hair on your arm causes severe pain. For patients with neuropathic pain – a chronic illness affecting 7 to 8% of the European population, with no effective treatment – this can be a daily reality.

Scientists from EMBL Rome have now identified a special population of nerve cells in the skin that are responsible for sensitivity to gentle touch. These are also the cells that cause severe pain in patients with neuropathic pain. The research team, led by EMBL group leader Paul Heppenstall, developed a light-sensitive chemical that selectively binds to this type of nerve cell. By first injecting the affected skin area with the chemical and then illuminating it with near-infrared light, the targeted nerve cells retract from the skin’s surface, leading to pain relief. Nature Communications publishes the results on 24 April 2018.

By clipping off the nerve endings with light, the gentle touch that can cause severe pain in neuropathic patients is no longer felt. “It’s like eating a strong curry, which burns the nerve endings in your mouth and desensitizes them for some time,” says Heppenstall. “The nice thing about our technique is that we can specifically target the small subgroup of neurons causing neuropathic pain.”

There are many different types of nerve cells in your skin, which make you feel specific sensations like vibration, cold, heat, or normal pain. These cells are not affected by the light treatment at all. The skin is only desensitized to the gentlest touch, like a breeze, tickling, or an insect crawling across your skin.

Previous attempts to develop drugs to treat neuropathic pain have mostly focused on targeting single molecules. “We think however, that there’s not one single molecule responsible, there are many,” Heppenstall explains. “You might be able to succeed in blocking one or a couple, but others would take over the same function eventually. With our new illumination method, we avoid this problem altogether.”

Touch and pain were assessed by measuring reflexes in mice affected by neuropathic pain in their limbs. Affected mice will normally quickly withdraw their paw when it is gently touched. After the light therapy, however, they exhibited normal reflexes upon gentle touch. The effect of the therapy lasts for a few weeks, after which the nerve endings grow back and gentle touch causes pain again.

The team also investigated human skin tissue. The overall makeup of the tissue and the specifics of the neurons of interest appear to be similar, indicating that the method might be effective in managing neuropathic pain in humans. “In the end, our aim is to solve the problem of pain in both humans and animals,” says Heppenstall. “Of course, a lot of work needs to be done before we can do a similar study in people with neuropathic pain. That’s why we’re now actively looking for partners and are open for new collaborations to develop this method further, with the hope of one day using it in the clinic.”

Mechanical allodynia is a major symptom of neuropathic pain whereby innocuous touch evokes severe pain. Here we identify a population of peripheral sensory neurons expressing TrkB that are both necessary and sufficient for producing pain from light touch after nerve injury in mice. Mice in which TrkB-Cre-expressing neurons are ablated are less sensitive to the lightest touch under basal conditions, and fail to develop mechanical allodynia in a model of neuropathic pain. Moreover, selective optogenetic activation of these neurons after nerve injury evokes marked nociceptive behavior. Using a phototherapeutic approach based upon BDNF, the ligand for TrkB, we perform molecule-guided laser ablation of these neurons and achieve long-term retraction of TrkB-positive neurons from the skin and pronounced reversal of mechanical allodynia across multiple types of neuropathic pain. Thus we identify the peripheral neurons which transmit pain from light touch and uncover a novel pharmacological strategy for its treatment.