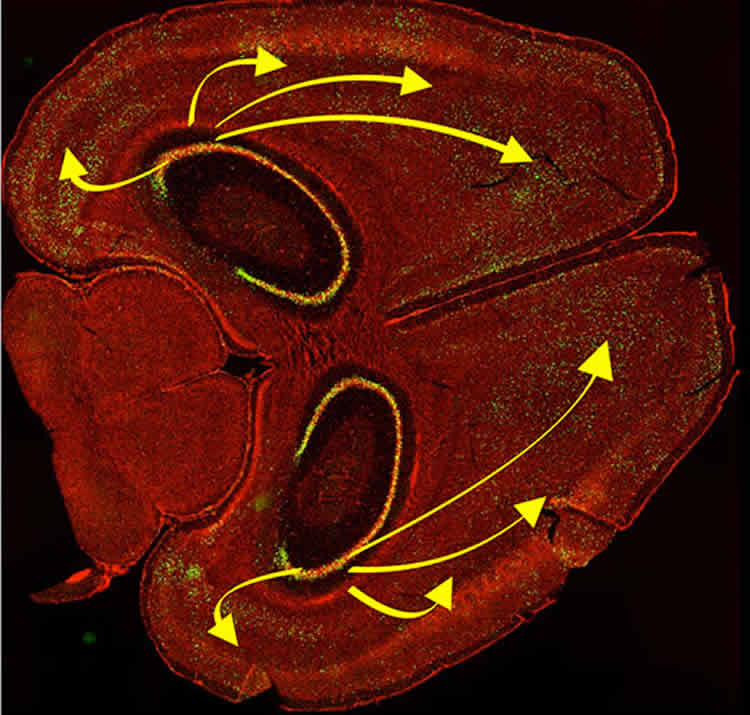 During memory retrieval, cells in the hippocampus connect to cells in the brain cortex. Credit Kazumasa Tanaka and Brian Wiltgen.

Just look into the light: not quite, but researchers at the UC Davis Center for Neuroscience and Department of Psychology have used light to erase specific memories in mice, and proved a basic theory of how different parts of the brain work together to retrieve episodic memories.

Optogenetics, pioneered by Karl Diesseroth at Stanford University, is a new technique for manipulating and studying nerve cells using light. The techniques of optogenetics are rapidly becoming the standard method for investigating brain function.

Kazumasa Tanaka, Brian Wiltgen and colleagues at UC Davis applied the technique to test a long-standing idea about memory retrieval. For about 40 years, Wiltgen said, neuroscientists have theorized that retrieving episodic memories — memories about specific places and events — involves coordinated activity between the cerebral cortex and the hippocampus, a small structure deep in the brain.

“The theory is that learning involves processing in the cortex, and the hippocampus reproduces this pattern of activity during retrieval, allowing you to re-experience the event,” Wiltgen said. If the hippocampus is damaged, patients can lose decades of memories.

But this model has been difficult to test directly, until the arrival of optogenetics.

Wiltgen and Tanaka used mice genetically modified so that when nerve cells are activated, they both fluoresce green and express a protein that allows the cells to be switched off by light. They were therefore able both to follow exactly which nerve cells in the cortex and hippocampus were activated in learning and memory retrieval, and switch them off with light directed through a fiber-optic cable.

“The cortex can’t do it alone, it needs input from the hippocampus,” Wiltgen said. “This has been a fundamental assumption in our field for a long time and Kazu’s data provides the first direct evidence that it is true.”

They could also see how the specific cells in the cortex were connected to the amygdala, a structure in the brain that is involved in emotion and in generating the freezing response.

Co-authors are Aleksandr Pevzner, Anahita B. Hamidi, Yuki Nakazawa and Jalina Graham, all at the Center for Neuroscience. The work was funded by grants from the Whitehall Foundation, McKnight Foundation, Nakajima Foundation and the National Science Foundation.