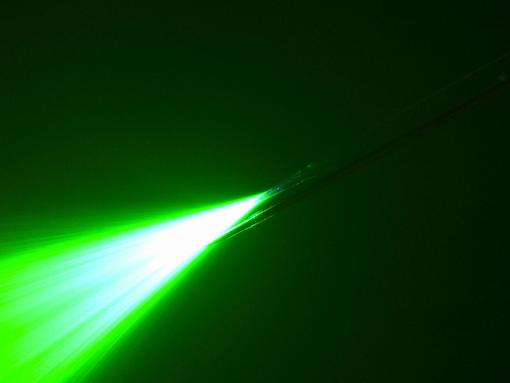 This hair-thin combination of electrode and optical fiber allows researchers to deliver stimulating light and current to a neuron and to measure the electrical activity of each. Credit: Sheinberg lab/Brown University.
Home
Featured

Optogenetics As Good As Electrical Stimulation

Brown researchers have shown that optogenetics — a technique that uses pulses of visible light to alter the behavior of brain cells — can be as good as or possibly better than the older technique of using small bursts of electrical current. Optogenetics had been used in small rodent models. Research reported in Current Biology has shown that optogenetics works effectively in larger, more complex brains.

Neuroscientists are eagerly, but not always successfully, looking for proof that optogenetics – a celebrated technique that uses pulses of visible light to genetically alter brain cells to be excited or silenced – can be as successful in complex and large brains as it has been in rodent models.

A new study in the journal Current Biology may be the most definitive demonstration yet that the technique can work in nonhuman primates as well as, or even a little better than, the tried-and-true method of perturbing brain circuits with small bursts of electrical current. Brown University researchers directly compared the two techniques to test how well they could influence the visual decision-making behavior of two primates.

“For most of my colleagues in neuroscience to say ‘I’ll be able to incorporate [optogenetics] into my daily work with nonhuman primates,’ you have to get beyond ‘It does seem to sort of work’,” said study senior author David Sheinberg, professor of neuroscience professor affiliated with the Brown Institute for Brain Science. “In our comparison, one of the nice things is that in some ways we found quite analogous effects between electrical and optical [stimulation] but in the optical case it seemed more focused.”

Ultimately if it consistently proves safe and effective in the large, complex brains of primates, optogenetics could eventually be used in humans where it could provide a variety of potential diagnostic and therapeutic benefits.

With that in mind, Sheinberg, lead author Ji Dai and second author Daniel Brooks designed their experiments to determine whether and how much optical or electrical stimulation in a particular area of the brain called the lateral intraparietal area (LIP) would affect each subject’s decision making when presented with a choice between a target and a similar-looking, distracting character.

“This is an area of the brain involved in registering the location of salient objects in the visual world,” said Sheinberg who added that the experimental task was more cognitively sophisticated than those tested in optogenetics experiments in nonhuman primates before.

The main task for the subjects was to fixate on a central point in middle of the screen and then to look toward the letter “T” when it appeared around the edge of the screen. In some trials, they had to decide quickly between the T and a similar looking “+” or “†” character presented on opposite ends of the screen. They were rewarded if they glanced toward the T.

Before beginning those trials, the researchers had carefully placed a very thin combination sensor of an optical fiber and an electrode amid a small population of cells in the LIP of each subject. Then they mapped where on the screen an object should be in order for them to detect a response in those cells. They called that area the receptive field. With this information, they could then look to see what difference either optical or electrical stimulation of those cells would have on the subject’s inclination to look when the T or the distracting character appeared at various locations in visual space.

In other words, the stimulation of a particular group of LIP cells significantly biased the subjects to look at objects that appeared in the receptive field associated with those cells. Either stimulation method could therefore make the subjects more accurate or effectively distract them from making the right choice.

The magnitude of the difference made by either stimulation method compared to no stimulation were small, but statistically significant. When the T was in the receptive field, one research subject became 10 percentage points more accurate (80 percent vs. 70 percent) when optically stimulated and eight points more accurate when electrically stimulated. The subject was five points less accurate (73 percent vs. 78 percent) with optical stimulation and six percentage points less accurate with electrical stimulation when the distracting character was in the receptive field.

The other subject showed similar differences. In all, the two primates made thousands of choices over scores of sessions between the T and the distracting character with either kind of stimulation or none. Compared head-to-head in a statistical analysis, electrical and optical stimulation showed essentially similar effects in biasing the decisions.

Although the two methods performed at parity on the main measure of accuracy, the optogenetic method had a couple of advantages, Sheinberg said.

Electrical stimulation appeared to be less precise in the cells it reached, a possibility suggested by a reduction in electrically stimulated subjects’ reaction time when the T appeared outside the receptive field. Optogenetic stimulation, Sheinberg said, did not produce such unintended effects.

Neuroscientists Isolate Promising Mini Antibodies Against COVID-19 From a Llama

Sheinberg said he is encouraged about using optogenetics to investigate even more sophisticated questions of cognition.

“Our goal is to be able to now expand this and use it again as a daily tool to probe circuits in more complicated paradigms,” Sheinberg said.

He plans a new study in which his group will look at memory of visual cues in the LIP.

Notes about this optogenetics and neuroscience research

The Defense Advanced Research Projects Agency funded the study through a grant called REPAIR, meant to lay the basic neuroscience groundwork for ultimately addressing traumatic brain injury and other damage. This research was reviewed and is in compliance with IACUC guidelines.