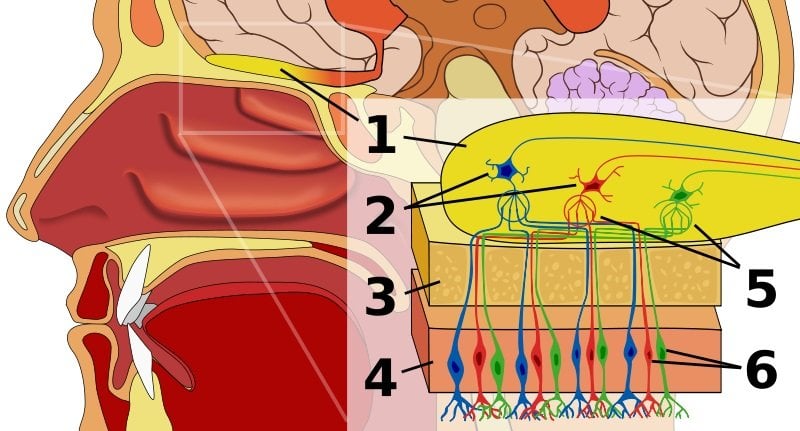 During the experiment, the researchers observed two distinct and independent circuits in the brain; one dedicated to olfactory processing and the other to emotion, became intertwined under the anxiety conditions. This is a diagram of the human olfactory system, labeled as 1: Olfactory bulb 2: Mitral cells 3: Bone 4: Nasal epithelium 5: Glomerulus 6: Olfactory receptor cells.
Home
Featured

A Shot of Anxiety and the World Stinks

In evolutionary terms, smell is among the oldest of the senses. In animals ranging from invertebrates to humans, olfaction exerts a primal influence as the brain continuously and subconsciously processes the steady stream of scent molecules that waft under our noses.

And while odors — whether the aroma of stinky socks or the sweet smell of baking bread — are known to stir the emotions, how they exert their influence biologically on the emotional centers of the human brain, evoking passion or disgust, has been a black box.

Now, however, researchers using powerful new brain imaging technologies are peeling back some of the mystery, revealing how anxiety or stress can rewire the brain, linking centers of emotion and olfactory processing, to make typically benign smells malodorous.

Writing in the Journal of Neuroscience, a team led by Wen Li, a professor of psychology at the UW-Madison Waisman Center, reports that the brains of human subjects experience anxiety induced by disturbing pictures and text of things like car crashes and war transform neutral odors to distasteful ones, fueling a feedback loop that could heighten distress and lead to clinical issues like anxiety and depression.

The finding is important because it may help scientists understand the dynamic nature of smell perception and the biology of anxiety as the brain rewires itself under stressful circumstances and reinforces negative sensations and feelings.

Functional MRI is a technology that enables clinicians and researchers to observe the working brain in action. Before entering the MRI where screens cycle through a series of disturbing pictures and text, subjects were exposed to and rated a panel of neutral smells.

In the course of the experiment, the Wisconsin team observed that two distinct and typically independent circuits of the brain — one dedicated to olfactory processing, the other to emotion — become intimately intertwined under conditions of anxiety. Subsequent to anxiety induction and the imaging process, subjects were asked again to rate the panel of neutral smells, most assigning negative responses to smells they previously rated as neutral.

“In typical odor processing, it is usually just the olfactory system that gets activated,” says Li. “But when a person becomes anxious, the emotional system becomes part of the olfactory processing stream.”

Although those two systems of the brain are right next to each other, under normal circumstances there is limited crosstalk between the two. However, under conditions of induced anxiety, the Wisconsin team observed the emergence of a unified network cutting across the two systems.

The results may have clinical implications in the sense that it begins to uncover the biological mechanisms at play during periods of anxiety. “We encounter anxiety and as a result we experience the world more negatively. The environment smells bad in the context of anxiety. It can become a vicious cycle, making one more susceptible to a clinical state of anxiety as the effects accumulate. It can potentially lead to a higher level of emotional disturbances with rising ambient sensory stress.”

Written by Terry Devitt
Contact: Terry Devitt – University of Wisconsin Madison
Source: University of Wisconsin Madison press release
Image Source: The Human olfactory system diagram is credited to Patrick J. Lynch from Wikimedia Commons user Chabacano. The image is licensed as Creative Commons Attribution-Share Alike 2.5 Generic.
Original Research: The research will be published in the Journal of Neuroscience. We will provide a link to the research when it is made available.