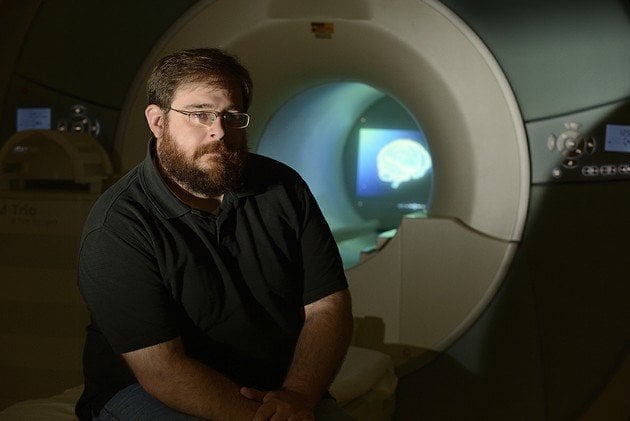 Covert Operations: Your Brain Digitally Remastered for Clarity of Thought

Neurofeedback can enhance the signal-to-noise ratio in thought, enabling a sharper focus on tasks.

The sweep of a needle across the grooves of a worn vinyl record carries distinct sounds: hisses, scratches, even the echo of skips. For many years, though, those yearning to hear Frank Sinatra sing “Fly Me to the Moon” have been able to listen to his light baritone with technical clarity, courtesy of the increased signal-to-noise ratio of digital remasterings.

Now, with advances in neurofeedback techniques, the signal-to-noise ratio of the brain activity underlying our thoughts can be remastered as well, according to the recent discovery of a research team led by Stephen LaConte, an assistant professor at the Virginia Tech Carilion Research Institute.

LaConte and his colleagues specialize in real-time functional magnetic resonance imaging, a relatively new technology that can convert thought into action by transferring noninvasive measurements of human brain activity into control signals that drive physical devices and computer displays in real time. Crucially, for the ultimate goal of treating disorders of the brain, this rudimentary form of mind reading enables neurofeedback.

“Our brains control overt actions that allow us to interact directly with our environments, whether by swinging an arm or singing an aria,” LaConte said. “Covert mental activities, on the other hand—such as visual imagery, inner language, or recollections of the past—can’t be observed by others and don’t necessarily translate into action in the outside world.”

In the recent study, the scientists used whole-brain, classifier-based real-time functional magnetic resonance imaging to understand the neural underpinnings of brain–computer interface control. The research team asked two dozen subjects to control a visual interface by silently counting numbers at fast and slow rates. For half the tasks, the subjects were told to use their thoughts to control the movement of the needle on the device they were observing; for the other tasks, they simply watched the needle.

The scientists discovered a feedback effect that LaConte said he had long suspected existed but had found elusive: the subjects who were in control of the needle achieved a better whole-brain signal-to-noise ratio than those who simply watched the needle move. “When the subjects were performing the counting task without feedback, they did a pretty good job,” LaConte said. “But when they were doing it with feedback, we saw increases in the signal-to-noise ratio of the entire brain. This improved clarity could mean that the signal was sharpening, the noise was dropping, or both. I suspect the brain was becoming less noisy, allowing the subject to concentrate on the task at hand.”

The scientists also found that the act of controlling the computer–brain interface led to an increased classification accuracy, which corresponded with improvements in the whole-brain signal-to-noise ratio.

This enhanced signal-to-noise ratio, LaConte added, carries implications for brain rehabilitation. “When people undergoing real-time brain scans get feedback on their own brain activity patterns, they can devise ways to exert greater control of their mental processes,” LaConte said. “This, in turn, gives them the opportunity to aid in their own healing. Ultimately, we want to use this effect to find better ways to treat brain injuries and psychiatric and neurological disorders.”

“Dr. LaConte’s discovery represents a milestone in the development of noninvasive brain imaging approaches with potential for neurorehabilitation,” said Michael Friedlander, executive director of the Virginia Tech Carilion Research Institute and a neuroscientist who specializes in brain plasticity. “This research carries implications for people whose brains have been damaged, such as through traumatic injury or stroke, in ways that affect the motor system—how they walk, move an arm, or speak, for example. Dr. LaConte’s innovations with real-time functional brain imaging are helping to set the stage for the future, for capturing covert brain activity and creating better computer interfaces that can help people retrain their own brains.”

Notes about this neuroscience and neurofeedback research