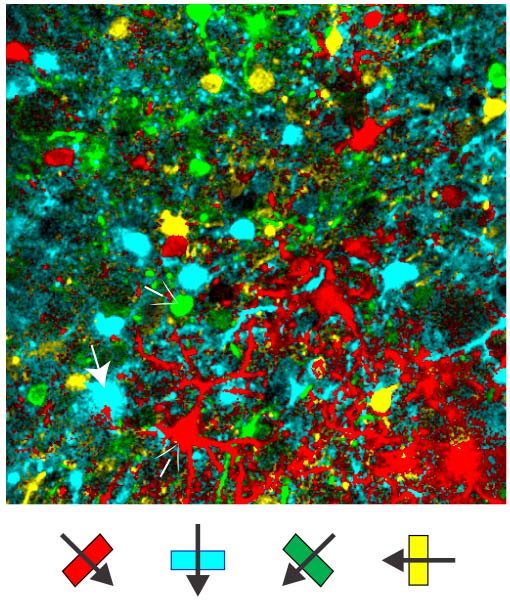 Every time you say a word, take a step, or read a sentence, a collection of neurons sends a speedy relay of messages throughout your brain to process the information. Now, researchers have a new way of watching those messages in action, by watching each cell in the chain light up when it fires.

When a neuron receives a signal from one of its neighbors, the impulse sets off a sudden series of electrochemical events geared toward passing the message along. Among the first events: calcium ions rush into the neurons when a set of channels opens. Scientists at the Howard Hughes Medical Institute’s Janelia Farm Research Campus have engineered a new protein that brightly fluoresces each time it senses these calcium waves, giving the scientists a way to visualize the activity of every neuron throughout the brain. The new protein is the most sensitive calcium sensor ever developed and the first to allow the detection of every neural impulse, rather than just a portion. The results are reported in the July 18, 2013 issue of the journal Nature.

“You can think of the brain as an orchestra with each different neuron type playing a different part,” says Janelia lab head Karel Svoboda, a neurobiologist and member of the team that developed the new sensor. “Previous methods only let us hear a tiny fraction of the melodies. Now we can hear more of the symphony at once. Improving the molecule and imaging methods in the future could allow us to hear the entire symphony.”

Detecting which neurons in the brain are firing, and when, is a key step in learning which areas of the brain are linked to particular activities or disorders, how memories are formed, how behaviors are learned, and basic questions about how the brain organizes neurons and stores information in this organization.

Two decades ago, scientists who wanted to use calcium to pinpoint neural activity relied on synthetic calcium-indicator dyes, first developed by HHMI Investigator Roger Tsien. The dyes lit up when neurons fired, but were difficult to inject and highly toxic—an animal’s brain could only be imaged once using the dyes.

In 1997, researchers led by Tsien developed the first genetically encoded calcium indicator (GECI). GECIs were made by combining a gene for a calcium sensor with the gene for a fluorescent protein in a way that made the calcium sensor fluoresce when it bound calcium. The GECI genes could be integrated into the genomes of model organisms like mice or flies so that no dye injection was necessary. The animals’ own brain cells would produce the proteins throughout their lives, and brain activity could be studied again and again in any one animal, allowing long-term studies of processes like learning and development. But GECIs weren’t as accurate as the cumbersome dyes had been, and improving them was a slow process.

“New versions were developed in a very piecemeal way,” says Svoboda, explaining that after chemists developed the sensors, it might be years before biologists had an opportunity to test them in the brains of living animals. “It was a very slow process of getting feedback.”

Svoboda, along with Janelia lab heads Loren Looger, Vivek Jayaraman and Rex Kerr formed the Genetically Encoded Neural Indicator and Effector (GENIE) project at Janelia to speed up the innovation. The GENIE project, led by Douglas Kim, an HHMI program scientist, is one of several collaborative team projects online at Janelia. The project developed a higher-throughput and more accurate way of testing new variants of the best-working GECI, called GCaMP. Steps included simple tests that could easily be performed on many proteins at once, like measuring how much fluorescence the protein gave off when exposed to calcium in a cuvette, as well as early tests of function in different types of neurons and final experiments in genetically engineered mice, flies, and zebrafish.

“When people developed previous GECIs, they would test somewhere between ten and twenty variants very carefully. We were able to screen a thousand in a highly quantitative neuronal assay,” Looger says. “And when you can look at that many constructs, you’re going to make better and more interesting observations on what makes the ideal sensor.”

The team made successive rounds of tweaks to the structure of the GCaMP so that it accurately sensed calcium, shone brightly in response, and worked in model organisms. After that work they settled upon a version of the sensor that performed better in all aspects than previous GECIs. Their new sensor, dubbed GCaMP6, produced signals seven times stronger than past versions. Surprisingly, its sensitivity even outperformed synthetic dyes.

“People had assumed that the synthetic dyes were letting us see every event in neurons,” says Looger. “But we’ve now shown that not only are these dyes hard to load and quite toxic, but they weren’t even recording every event.”

GCaMP6 will be a boon to researchers at Janelia, and around the world, who want to get a full picture of the activity of every neuron in the brain. Meanwhile, the team plans to continue to continue to improve it, developing entirely new versions for specific uses. For example, they hope to make a GECI that gives off red fluorescence rather than green, because red is easier to see in deeper tissues.

“One of the stated goals of Janelia Farm is to develop an atlas of every neuron in the Drosophila brain,” says Looger. “The most practical way I can think of to assign functions to such an atlas is with calcium sensors. With this new sensor, I think people will feel much more comfortable that they’re really getting all the information they can.”