Swarming Insect Provides Clues to How the Brain Processes Smells

Our sense of smell is often the first response to environmental stimuli. Odors trigger neurons in the brain that alert us to take action. However, there is often more than one odor in the environment, such as in coffee shops or grocery stores. How does our brain process multiple odors received simultaneously?

Barani Raman, PhD, of the School of Engineering & Applied Science at Washington University in St. Louis, set out to find an answer. Using locusts, which have a relatively simple sensory system ideal for studying brain activity, he found the odors prompted neural activity in the brain that allowed the locust to correctly identify the stimulus, even with other odors present.

The results were published in Nature Neuroscience as the cover story of the December 2013 print issue.

The team uses a computer-controlled pneumatic pump to administer an odor puff to the locust, which has olfactory receptor neurons in its antennae, similar to sensory neurons in our nose. A few seconds after the odor puff is given, the locust gets a piece of grass as a reward, as a form of Pavlovian conditioning. As with Pavlov’s dog, which salivated when it heard a bell ring, trained locusts anticipate the reward when the odor used for training is delivered. Instead of salivating, they open their palps, or finger-like projections close to the mouthparts, when they predict the reward. Their response was less than half of a second. The locusts could recognize the trained odors even when another odor meant to distract them was introduced prior to the target cue. 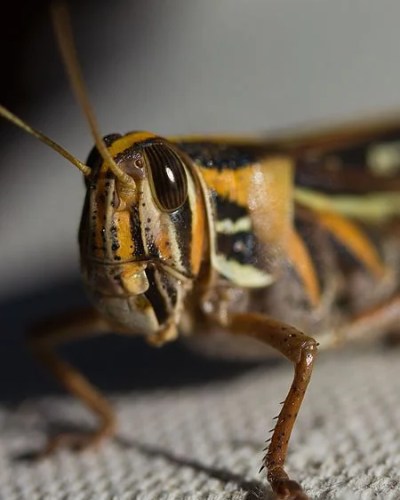 Researchers uses a computer-controlled pneumatic pump to administer an odor puff to the locust, which has olfactory receptor neurons in its antennae, similar to sensory neurons in our nose. A few seconds after the odor puff is given, the locust gets a piece of grass as a reward, as a form of Pavlovian conditioning. This is an image of a locust (Schistocerca americana). Credited to Rob Ireton.

“We were expecting this result, but the speed with which it was done was surprising,” says Raman, assistant professor of biomedical engineering. “It took only a few hundred milliseconds for the locust’s brain to begin tracking a novel odor introduced in its surrounding. The locusts are processing chemical cues in an extremely rapid fashion.”

“There were some interesting cues in the odors we chose,” Raman says. “Geraniol, which smells like rose to us, was an attractant to the locusts, but citral, which smells like lemon to us, is a repellant to them. This helped us identify principles that are common to the odor processing.

Raman has spent a decade learning how the human brain and olfactory system operate to process scent and odor signals. His research seeks to take inspiration from the biological olfactory system to develop a device for noninvasive chemical sensing. Such a device could be used in homeland security applications to detect volatile chemicals and in medical diagnostics, such as a device to test blood-alcohol level.

This study is the first in a series seeking to understand the principles of olfactory computation, Raman says.

“There is a precursory cue that could tell the brain there is a predator in the environment, and it has to predict what will happen next,” Raman says. “We want to determine what kinds of computations have to be done to make those predictions.”

In addition, the team is looking to answer other questions.

“Neural activity in the early processing centers does not terminate until you stop the odor pulse,” he says. “If you have a lengthy pulse – 5 or 10 seconds long – what is the role of neural activity that persists throughout the stimulus duration and often even after you terminate the stimulus? What are the roles of the neural activity generated at different points in time, and how do they help the system adapt to the environment? Those questions are still not clear.”

Funding for this research was provided by the McDonnell Center for System Neuroscience and the Department of Biomedical Engineering at Washington University and the Office of Naval Research of the U.S. Department of Defense.