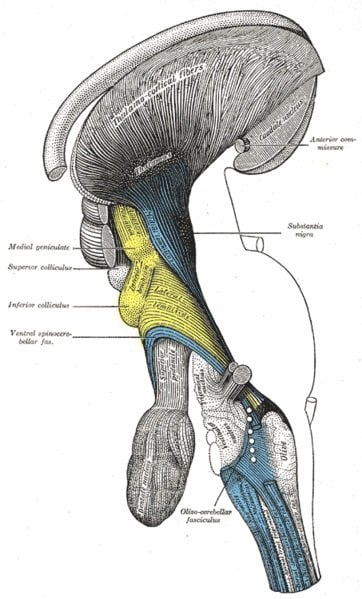 During the experiment, researchers recorded the activity of individual neurons in the inferior colliculus while the animal listened to sounds coming from different directions. They discovered the location of the sound source could be accurately predicted from the pattern of activation across a population of less than 100 IC neurons. The image shows a deep dissection of brain-stem. Lateral view. The "Inferior colliculus" is yellow, and is labeled at left.
Home
Featured

As Baby Boomers age, many experience difficulty in hearing and understanding conversations in noisy environments such as restaurants. People who are hearing-impaired and who wear hearing aids or cochlear implants are even more severely impacted. Researchers know that the ability to locate the source of a sound with ease is vital to hear well in these types of situations, but much more information is needed to understand how hearing works to be able to design devices that work better in noisy environment.

Researchers from the Eaton-Peabody Laboratories of the Massachusetts Eye and Ear, Harvard Medical School, and Research Laboratory of Electronics, Massachusetts Institute of Technology have gained new insight into how localized hearing works in the brain. Their research is published in the Oct. 2, 2013 issue of the Journal of Neuroscience.

“Most people are able to locate the source of a sound with ease, for example, a snapping twig on the left, or a honking horn on the right. However this is actually a difficult problem for the brain to solve,” said Mitchell L. Day, Ph.D., investigator in the Eaton-Peabody Laboratories at Mass. Eye and Ear and instructor of Otology and Laryngology at Harvard Medical School “The higher levels of the brain that decide the direction a sound is coming from do not have access to the actual sound, but only the representation of that sound in the electrical activity of neurons at lower levels in the brain. How higher levels of the brain use information contained in the electrical activity of these lower-level neurons to create the perception of sound location is not known.”

“Our results show that higher levels of the brain may be able to accurately segregate and localize sound sources based on the detection of patterns in a relatively small population of IC neurons,” said Dr. Day. “We hope to learn more so that someday we can design devices that work better in noisy environments.”

This work was funded by National Institute on Deafness and Other Communication Disorders grants RO1 DC002258 and P30 DC005209. The paper was co-authored by Mitchell L. Day and Bertrand Delgutte.

Contact: Mary Leach – Massachusetts Eye and Ear Infirmary
Source: Massachusetts Eye and Ear Infirmary
Image Source: The Inferior Colliculus image is credited to Gray’s Anatomy. The image is in the public domain.
Original Research: The research paper will be published in the Journal of Neuroscience on October 2 2013. We will provide a link to the research when available.