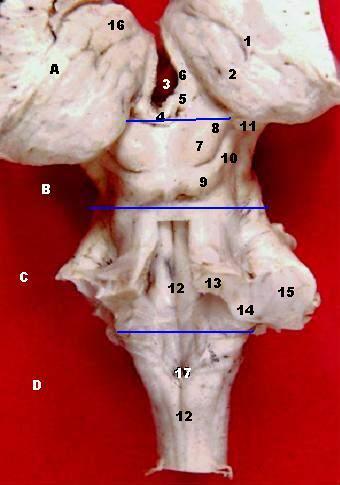 Previous studies suggest that turning off the lateral habenula would cause rats to choose the larger, riskier reward more often, but that was not the case. Instead, the rats selected either option at random, no longer showing the ability to choose the best option for them. The habenula is labeled number 5 in this image. Credit provided below.
Home
Featured

Scientists Find Brain Region That Helps You Make Up Your Mind

One of the smallest parts of the brain is getting a second look after new research suggests it plays a crucial role in decision making.

A University of British Columbia study published today in Nature Neuroscience says the lateral habenula, a region of the brain linked to depression and avoidance behaviours, has been largely misunderstood and may be integral in cost-benefit decisions.

“These findings clarify the brain processes involved in the important decisions that we make on a daily basis, from choosing between job offers to deciding which house or car to buy,” says Prof. Stan Floresco of UBC’s Dept. of Psychology and Brain Research Centre (BRC). “It also suggests that the scientific community has misunderstood the true functioning of this mysterious, but important, region of the brain.”

In the study, scientists trained lab rats to choose between a consistent small reward (one food pellet) or a potentially larger reward (four food pellets) that appeared sporadically. Like humans, the rats tended to choose larger rewards when costs—in this case, the amount of time they had to wait before receiving food–were low and preferred smaller rewards when such risks were higher.

Previous studies suggest that turning off the lateral habenula would cause rats to choose the larger, riskier reward more often, but that was not the case. Instead, the rats selected either option at random, no longer showing the ability to choose the best option for them.

The findings have important implications for depression treatment. “Deep brain stimulation – which is thought to inactivate the lateral habenula — has been reported to improve depressive symptoms in humans,” Floresco says. “But our findings suggest these improvements may not be because patients feel happier. They may simply no longer care as much about what is making them feel depressed.”

Floresco, who conducted the study with PhD candidate Colin Stopper, says more investigation is needed to understand the complete brain functions involved in cost-benefit decision processes and related behaviour. A greater understanding of decision-making processes is also crucial, they say, because many psychiatric disorders, such as schizophrenia, stimulant abuse and depression, are associated with impairments in these processes.

The Gene to Which We Owe Our Big Brain

The lateral habenula is considered one of the oldest regions of the brain, evolution-wise, the researchers say.

Notes about this neurosciene research