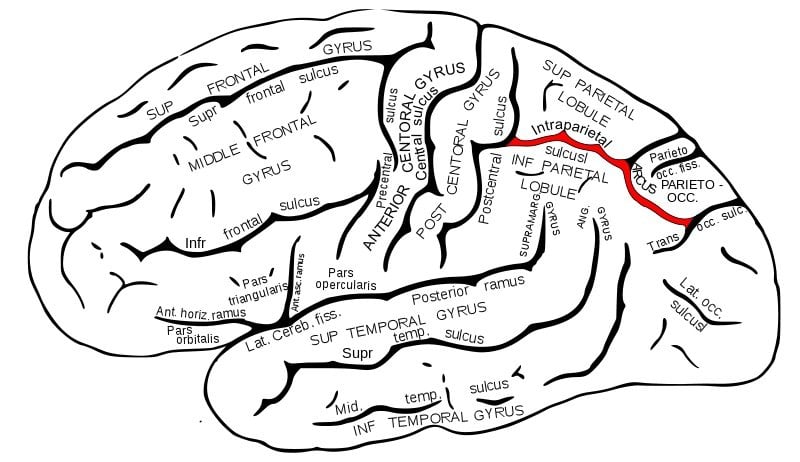 Researchers monitored the electrical activity in the intraparietal sulcus, an area of the brain known to be important in attention, as well as eye and hand motion. Previous studies have also hinted some of the neuron clusters in this area are also involved in numerosity. The intraparietal sulcus is highlighted in red in this image.
Home
Featured

A brain region activated when people are asked to perform mathematical calculations in an experimental setting is similarly activated when they use numbers — or even imprecise quantitative terms, such as “more than”— in everyday conversation, according to a study by Stanford University School of Medicine scientists.

Using a novel method, the researchers collected the first solid evidence that the pattern of brain activity seen in someone performing a mathematical exercise under experimentally controlled conditions is very similar to that observed when the person engages in quantitative thought in the course of daily life.

The finding could lead to “mind-reading” applications that, for example, would allow a patient who is rendered mute by a stroke to communicate via passive thinking. Conceivably, it could also lead to more dystopian outcomes: chip implants that spy on or even control people’s thoughts.

“This is exciting, and a little scary,” said Henry Greely, JD, the Deane F. and Kate Edelman Johnson Professor of Law and steering committee chair of the Stanford Center for Biomedical Ethics, who played no role in the study but is familiar with its contents and described himself as “very impressed” by the findings. “It demonstrates, first, that we can see when someone’s dealing with numbers and, second, that we may conceivably someday be able to manipulate the brain to affect how someone deals with numbers.”

The researchers monitored electrical activity in a region of the brain called the intraparietal sulcus, known to be important in attention and eye and hand motion. Previous studies have hinted that some nerve-cell clusters in this area are also involved in numerosity, the mathematical equivalent of literacy.

However, the techniques that previous studies have used, such as functional magnetic resonance imaging, are limited in their ability to study brain activity in real-life settings and to pinpoint the precise timing of nerve cells’ firing patterns. These studies have focused on testing just one specific function in one specific brain region, and have tried to eliminate or otherwise account for every possible confounding factor. In addition, the experimental subjects would have to lie more or less motionless inside a dark, tubular chamber whose silence would be punctuated by constant, loud, mechanical, banging noises while images flashed on a computer screen.

“This is not real life,” said Parvizi. “You’re not in your room, having a cup of tea and experiencing life’s events spontaneously.” A profoundly important question, he said, is: “How does a population of nerve cells that has been shown experimentally to be important in a particular function work in real life?”

His team’s method, called intracranial recording, provided exquisite anatomical and temporal precision and allowed the scientists to monitor brain activity when people were immersed in real-life situations. Parvizi and his associates tapped into the brains of three volunteers who were being evaluated for possible surgical treatment of their recurring, drug-resistant epileptic seizures.

The procedure involves temporarily removing a portion of a patient’s skull and positioning packets of electrodes against the exposed brain surface. For up to a week, patients remain hooked up to the monitoring apparatus while the electrodes pick up electrical activity within the brain. This monitoring continues uninterrupted for patients’ entire hospital stay, capturing their inevitable repeated seizures and enabling neurologists to determine the exact spot in each patient’s brain where the seizures are originating.

During this whole time, patients remain tethered to the monitoring apparatus and mostly confined to their beds. But otherwise, except for the typical intrusions of a hospital setting, they are comfortable, free of pain and free to eat, drink, think, talk to friends and family in person or on the phone, or watch videos.

The electrodes implanted in patients’ heads are like wiretaps, each eavesdropping on a population of several hundred thousand nerve cells and reporting back to a computer.

In the study, participants’ actions were also monitored by video cameras throughout their stay. This allowed the researchers later to correlate patients’ voluntary activities in a real-life setting with nerve-cell behavior in the monitored brain region.

As part of the study, volunteers answered true/false questions that popped up on a laptop screen, one after another. Some questions required calculation — for instance, is it true or false that 2+4=5? — while others demanded what scientists call episodic memory — true or false: I had coffee at breakfast this morning. In other instances, patients were simply asked to stare at the crosshairs at the center of an otherwise blank screen to capture the brain’s so-called “resting state.”

Consistent with other studies, Parvizi’s team found that electrical activity in a particular group of nerve cells in the intraparietal sulcus spiked when, and only when, volunteers were performing calculations.

Afterward, Parvizi and his colleagues analyzed each volunteer’s daily electrode record, identified many spikes in intraparietal-sulcus activity that occurred outside experimental settings, and turned to the recorded video footage to see exactly what the volunteer had been doing when such spikes occurred.

They found that when a patient mentioned a number — or even a quantitative reference, such as “some more,” “many” or “bigger than the other one” — there was a spike of electrical activity in the same nerve-cell population of the intraparietal sulcus that was activated when the patient was doing calculations under experimental conditions.

Hope for Children at Risk of Relapse in Depression

That was an unexpected finding. “We found that this region is activated not only when reading numbers or thinking about them, but also when patients were referring more obliquely to quantities,” said Parvizi.

“These nerve cells are not firing chaotically,” he said. “They’re very specialized, active only when the subject starts thinking about numbers. When the subject is reminiscing, laughing or talking, they’re not activated.” Thus, it was possible to know, simply by consulting the electronic record of participants’ brain activity, whether they were engaged in quantitative thought during nonexperimental conditions.

Any fears of impending mind control are, at a minimum, premature, said Greely. “Practically speaking, it’s not the simplest thing in the world to go around implanting electrodes in people’s brains. It will not be done tomorrow, or easily, or surreptitiously.”

Parvizi agreed. “We’re still in early days with this,” he said. “If this is a baseball game, we’re not even in the first inning. We just got a ticket to enter the stadium.”

The study was funded by the National Institutes of Health (grant R01NS0783961), the Stanford NeuroVentures Program, and the Gwen and Gordon Bell Family. Additional co-authors were postdoctoral scholar Brett Foster, PhD, and research assistant Vinitha Rangarajan.