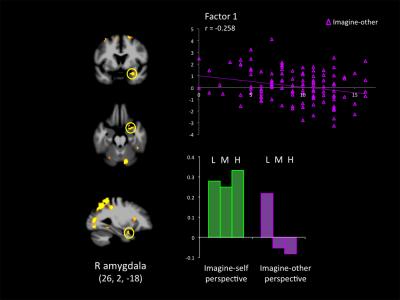 This is response in the right amygdala across groups of low (L), medium (M) and high (H) psychopathy participants, when they adopted an imagine-self and an imagine-other affective perspective while viewing bodily injuries. Groupwise effects (bars at the bottom of the figure) are expanded to show the contribution of continuous PCL-R subscores on factor 1, which encompasses the emotional/interpersonal features of psychopathy. Credited to Decety. J, Chenyi. C, Harenski. C, and Kiehl. K, A. Frontiers in Human Neuroscience, 2013.
Home
Featured

A Neurological Basis for the Lack of Empathy in Psychopaths

When individuals with psychopathy imagine others in pain, brain areas necessary for feeling empathy and concern for others fail to become active and be connected to other important regions involved in affective processing and decision-making, reports a study published in the open-access journal Frontiers in Human Neuroscience.

Psychopathy is a personality disorder characterized by a lack of empathy and remorse, shallow affect, glibness, manipulation and callousness. Previous research indicates that the rate of psychopathy in prisons is around 23%, greater than the average population which is around 1%.

To better understand the neurological basis of empathy dysfunction in psychopaths, neuroscientists used functional magnetic resonance imaging (fMRI) on the brains of 121 inmates of a medium-security prison in the USA.

Participants were shown visual scenarios illustrating physical pain, such as a finger caught between a door, or a toe caught under a heavy object. They were by turns invited to imagine that this accident happened to themselves, or somebody else. They were also shown control images that did not depict any painful situation, for example a hand on a doorknob.

Participants were assessed with the widely used PCL-R, a diagnostic tool to identify their degree of psychopathic tendencies. Based on this assessment, the participants were then divided in three groups of approximately 40 individuals each: highly, moderately, and weakly psychopathic.

When highly psychopathic participants imagined pain to themselves, they showed a typical neural response within the brain regions involved in empathy for pain, including the anterior insula, the anterior midcingulate cortex, somatosensory cortex, and the right amygdala. The increase in brain activity in these regions was unusually pronounced, suggesting that psychopathic people are sensitive to the thought of pain.

But when participants imagined pain to others, these regions failed to become active in high psychopaths. Moreover, psychopaths showed an increased response in the ventral striatum, an area known to be involved in pleasure, when imagining others in pain.

This atypical activation combined with a negative functional connectivity between the insula and the ventromedial prefrontal cortex may suggest that individuals with high scores on psychopathy actually enjoyed imagining pain inflicted on others and did not care for them. The ventromedial prefrontal cortex is a region that plays a critical role in empathetic decision-making, such as caring for the wellbeing of others.

Taken together, this atypical pattern of activation and effective connectivity associated with perspective taking manipulations may inform intervention programs in a domain where therapeutic pessimism is more the rule than the exception. Altered connectivity may constitute novel targets for intervention. Imagining oneself in pain or in distress may trigger a stronger affective reaction than imagining what another person would feel, and this could be used with some psychopaths in cognitive-behavior therapies as a kick-starting technique, write the authors.