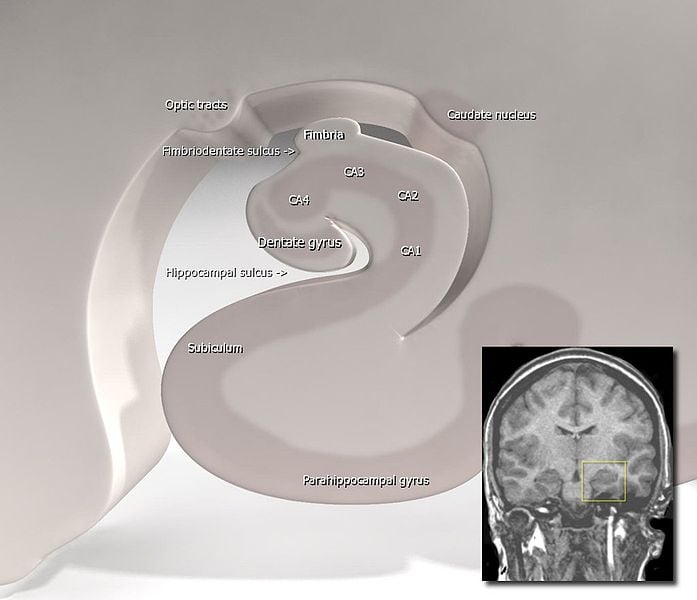 Researchers discovered associating negative imagery with specific locations activates the parahippocampal cortex, an area of the brain responsible for forming memory of places during navigation. This image is a stylized diagram of the hippocampus. The parahippocampal gyrus labeled at bottom center.
Home
Featured

Bad experiences enhance memory formation about places, scientists at The University of Queensland have found.

Dr Oliver Baumann from the Queensland Brain Institute found that associating negative imagery with specific locations activates a part of the brain responsible for forming memory of places during navigation – the parahippocampal cortex.

“This heightened recall occurs automatically, without people even being aware that the negative imagery is affecting their memories,” said Dr Baumann, who worked on the study in the QBI’s Mattingley lab.

“It could serve as a cue for avoiding potential threats,” Dr Baumann said.

“Our findings show that emotions can exert a powerful influence on spatial and navigational memory for places.

“In future we might be able to boost memory functions by triggering the positive side-effects of emotional arousal, while avoiding the need for negative experiences.”

For the research, Professor Jason Mattingley built a “virtual house” and staged events in each room unrelated to the subject navigating the house.

The events were designed to elicit an emotional response – positive, negative, or neutral, and varied in their rate of occurrence.

“The events were illustrated using images from the International Affective Picture System library and included dramatic scenes of attack and threat, as well as more pleasant imagery,” Dr Baumann said.

The day after navigating through the house, participants viewed static images of the house without the emotional imagery, while their neural activity was recorded using an MRI scanner.

The study was published in the Journal of Cognitive Neuroscience.

Notes about this neuropsychology and cognitive neuroscience research