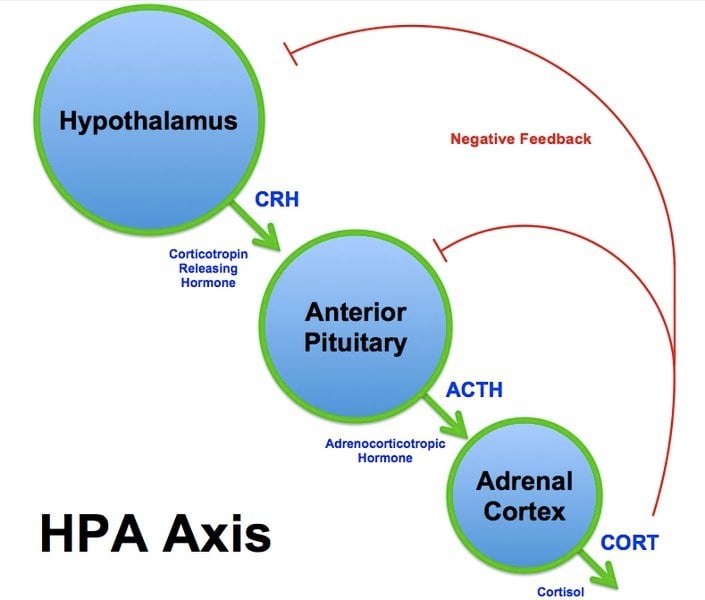 Over the past century, researchers have described the HPA axis which produces hormones that stimulate the "fight or flight" response. Since then, researchers have focused almost exclusively on the HPA axis when researching stress. Researchers suspected ghrelin was linked to the HPA axis, however they discovered that when the rats' adrenal glands were removed, the animals still became extremely fearful when chronically stressed. The study showed repeated ghrelin-receptor stimulation did not trigger release of HPA hormones, and that blockade of the ghrelin receptor did not blunt release of HPA stress hormones. Therefore, the ghrelin-initiated stress pathway appears to act independently of the HPA axis. This is a diagram of the HPA axis.
Home
Featured

About a dozen years ago, scientists discovered that a hormone called ghrelin enhances appetite. Dubbed the “hunger hormone,” ghrelin was quickly targeted by drug companies seeking treatments for obesity — none of which have yet panned out.

Drugs that reduce ghrelin levels, originally developed to try to combat obesity, could help protect people who are at high risk for PTSD, such as soldiers serving in war, says Ki Goosens, an assistant professor of brain and cognitive sciences at MIT, and senior author of a paper describing the findings in the Oct. 15 online edition of Molecular Psychiatry.

“Perhaps we could give people who are going to be deployed into an active combat zone a ghrelin vaccine before they go, so they will have a lower incidence of PTSD. That’s exciting because right now there’s nothing given to people to prevent PTSD,” says Goosens, who is also a member of MIT’s McGovern Institute for Brain Research.

Stress is a useful response to dangerous situations because it provokes action to escape or fight back. However, when stress is chronic, it can produce anxiety, depression and other mental illnesses.

At MIT, Goosens discovered that one brain structure that is especially critical for generating fear, the amygdala, has a special response to chronic stress. The amygdala produces large amounts of growth hormone during stress, a change that seems not to occur in other brain regions.

In the new paper, Goosens and her colleagues found that the release of the growth hormone in the amygdala is controlled by ghrelin, which is produced primarily in the stomach and travels throughout the body, including the brain.

The researchers found that when rats were given either a drug to stimulate the ghrelin receptor or gene therapy to overexpress growth hormone over a prolonged period, they became much more susceptible to fear than normal rats. Fear was measured by training all of the rats to fear an innocuous, novel tone. While all rats learned to fear the tone, the rats with prolonged increased activity of the ghrelin receptor or overexpression of growth hormone were the most fearful, assessed by how long they froze after hearing the tone. Blocking the cell receptors that interact with ghrelin or growth hormone reduced fear to normal levels in chronically stressed rats.

When rats were exposed to chronic stress over a prolonged period, their circulating ghrelin and amygdalar growth hormone levels also went up, and fearful memories were encoded more strongly. This is similar to what the researchers believe happens in people who suffer from PTSD.

Over the last century, scientists have described the hypothalamic-pituitary-adrenal (HPA) axis, which produces adrenaline, cortisol (corticosterone in rats), and other hormones that stimulate “fight or flight” behavior. Since then, stress research has focused almost exclusively on the HPA axis.

After discovering ghrelin’s role in stress, the MIT researchers suspected that ghrelin was also linked to the HPA axis. However, they were surprised to find that when the rats’ adrenal glands — the source of corticosterone, adrenaline, and noradrenaline — were removed, the animals still became overly fearful when chronically stressed. The authors also showed that repeated ghrelin-receptor stimulation did not trigger release of HPA hormones, and that blockade of the ghrelin receptor did not blunt release of HPA stress hormones. Therefore, the ghrelin-initiated stress pathway appears to act independently of the HPA axis. “That’s important because it gives us a whole new target for stress therapies,” Goosens says.

Increased Risk of Dementia and Depression in Rheumatoid Arthritis

Pharmaceutical companies have developed at least a dozen possible drug compounds that interfere with ghrelin. Many of these drugs have been found safe for humans, but have not been shown to help people lose weight. The researchers believe these drugs could offer a way to vaccinate people entering stressful situations, or even to treat people who already suffer from PTSD, because ghrelin levels remain high long after the chronic stress ends.

PTSD affects about 7.7 million American adults, including soldiers and victims of crimes, accidents, or natural disasters. About 40 to 50 percent of patients recover within five years, Meyer says, but the rest never get better.

The researchers hypothesize that the persistent elevation of ghrelin following trauma exposure could be one of the factors that maintain PTSD. “So, could you immediately reverse PTSD? Maybe not, but maybe the ghrelin could get damped down and these people could go through cognitive behavioral therapy, and over time, maybe we can reverse it,” Meyer says.

Working with researchers at Massachusetts General Hospital, Goosens’ lab is now planning to study ghrelin levels in human patients suffering from anxiety and fear disorders. They are also planning a clinical trial of a drug that blocks ghrelin to see if it can prevent relapse of depression.

Notes about this PTSD research

The research was funded by the U.S. Army Research Office, the Defense Advanced Research Projects Agency, and the National Institute of Mental Health.