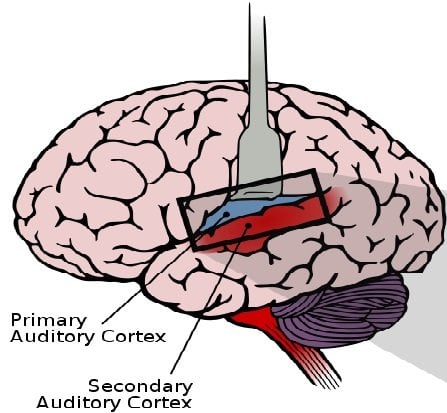 Researchers found the auditory cortex activity increased when the participants were expecting and received a reward, as well as when their expectation of receiving no reward was correct. This image shows a lateral view of the human brain, with the auditory cortex exposed.
Home
Featured

Getting an Expected Award is Music to the Brain’s Ears

Several studies have shown that expecting a reward or punishment can affect brain activity in areas responsible for processing different senses, including sight or touch. For example, research shows that these brain regions light up on brain scans when humans are expecting a treat. However, researchers know less about what happens when the reward is actually received—or an expected reward is denied. Insight on these scenarios can help researchers better understand how we learn in general.

To get a better grasp on how the brain behaves when people who are expecting a reward actually receive it, or conversely, are denied it, Tina Weis of Carl-von-Ossietzky University and her colleagues monitored the auditory cortex—the part of the brain that processes and interprets sounds—while volunteers solved a task in which they had a chance of winning 50 Euro cents with each round, signaled by a specific sound. Their findings show that the auditory cortex activity picked up both when participants were expecting a reward and received it, as well as when their expectation of receiving no reward was correct.

The article is entitled “Feedback that Confirms Reward Expectation Triggers Auditory Cortex Activity.” It appears in the Articles in Press section of the Journal of Neurophysiology, published by the American Physiological Society.

The researchers worked with 105 healthy adult volunteers with normal hearing. While each volunteer received a functional MRI (fMRI)—a brain scan that measures brain activity during tasks—the researchers had them solve a task with sounds where they had the chance of winning money at the end of each round. At the beginning of a round participants heard a sound and had to learn if this sound signified that they could win a 50 Euro cents reward or not. They then saw a number on a screen and had to press a button to indicate whether the number was greater or smaller than 5. If the sound before indicated that they could receive a reward and they solved the number task quickly and correctly, an image of a 50 Euro cents coin appeared on the screen. The researchers monitored brain activity in the subjects’ auditory cortex throughout the task, paying special attention to what happened when they received the reward, or not, at the end of the round.

Importance of the Findings

These findings add to accumulating evidence that the auditory cortex performs a role beyond just processing sound. Rather, this area of the brain appears to be activated during other activities that require learning and thought, such as confirming expectations of receiving a reward.

“Our findings thus support the view of a highly cognitive role of the auditory cortex,” the study authors say.

In addition to Tina Weis, the study team also includes Andre Brechmann of the Leibniz Institute for Neurobiology, and Sebastian Puschmann and Christiane M. Thiel of Carl-von-Ossietzky University.