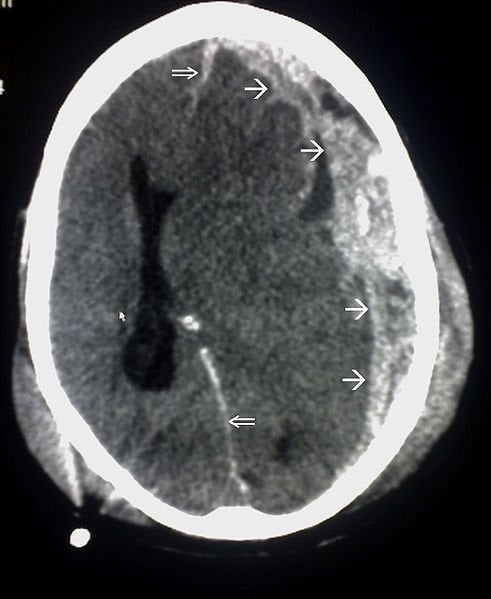 MAPC therapy has been found to reduce inflammation in mice immediately following TBI. Four months after treatment, mice which received stronger doses of treatment showed less inflammation and made significant gains in cognitive function. This image is a CT scan of a human brain with subdural haemorrhage caused by trauma. This image is for illustrative purposes only.
Home
Featured

The research was published in today’s issue of Stem Cells Translational Medicine.

Cellular damage in the brain after traumatic injury can cause severe, ongoing neurological impairment and inflammation. Few pharmaceutical options exist to treat the problem. About half of patients with severe head injuries need surgery to remove or repair ruptured blood vessels or bruised brain tissue.

A stem cell treatment known as multipotent adult progenitor cell (MAPC) therapy has been found to reduce inflammation in mice immediately after traumatic brain injury, but no one had been able to gauge its usefulness over time.

The research team led by Cox, the Children’s Fund, Inc. Distinguished Professor of Pediatric Surgery at the UTHealth Medical School, injected two groups of brain-injured mice with MAPCs two hours after the mice were injured and again 24 hours later. One group received a dose of 2 million cells per kilogram and the other a dose five times stronger.

After four months, the mice receiving the stronger dose not only continued to have less inflammation—they also made significant gains in cognitive function. A laboratory examination of the rodents’ brains confirmed that those receiving the higher dose of MAPCs had better brain function than those receiving the lower dose.

“Based on our data, we saw improved spatial learning, improved motor deficits and fewer active antibodies in the mice that were given the stronger concentration of MAPCs,” Cox said.

The study indicates that intravenous injection of MAPCs may in the future become a viable treatment for people with traumatic brain injury, he said.

Why Does the Alzheimer’s Brain Become Insulin-Resistant?

Cox, who directs the Pediatric Surgical Translational Laboratories and Pediatric Program in Regenerative Medicine at UTHealth, is a leader in the field of autologous and blood cord stem cells for traumatic brain injury in children and adults. Results from a Phase I study were published in a March 2011 issue of Neurosurgery, the journal of the Congress of Neurological Surgeons. Cox also directs the Pediatric Trauma Program at Children’s Memorial Hermann Hospital.

Notes about this brain injury and neurology research