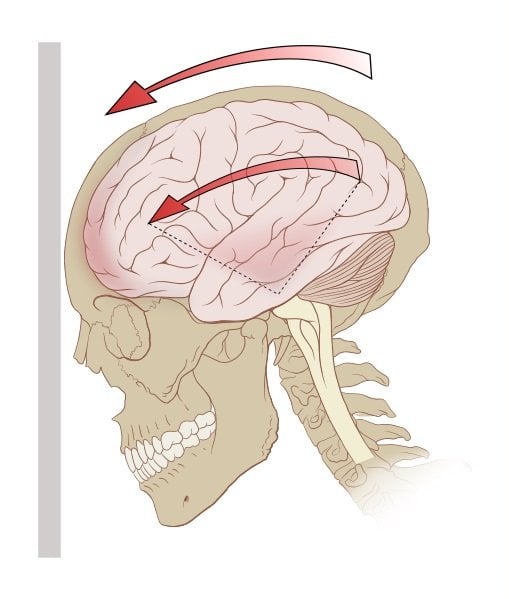 Researchers believe their findings could help teams reduce exposure to head impacts during practices by teaching correct tackling techniques that could reduce exposure to impacts that may result in a higher concussion rate, the researchers reported. This diagram illustrates the forces on the brain in concussion.
Home
Featured

Scientists at Wake Forest Baptist Medical Center have developed a new way to measure the cumulative effect of impacts to the head incurred by football players.

The metric, called Risk Weighted Cumulative Exposure (RWE), can capture players’ exposure to the risk of concussion over the course of a football season by measuring the frequency and magnitude of all impacts, said senior author of the study Joel Stitzel, Ph.D., chair of biomedical engineering at Wake Forest Baptist and associate head of the Virginia Tech – Wake Forest University School of Biomedical Engineering and Sciences.

The study is published in the current online edition of the Annals of Biomedical Engineering.

Based on data gathered throughout a season of high school football games and practices, the researchers used RWE to measure the cumulative risk of injury due to linear and rotational acceleration separately, as well as the combined probability of injury associated with both.

“This metric gives us a way to look at a large number of players and the hits they’ve incurred while playing football,” Stitzel said. “We know that young players are constantly experiencing low-level hits that don’t cause visible injury, but there hasn’t been a good way to measure the associated risk of concussion.”

Concussion is the most common sports-related head injury, with football players having the highest rate among high school athletes, according to the study. It is estimated that nearly 1.1 million students play high school football in the United States. However, research on the biomechanics of football-related head impacts traditionally has concentrated on the collegiate level rather than on the high school level.

With such a large number of players in the sport, it is critical to understand the risk associated with different levels of impact and accurately estimate cumulative concussion risk over the course of a practice, game, season or lifetime, Stitzel said.

In the Wake Forest Baptist study, the researchers measured the head impact exposure in 40 high school football players by using sensors placed in their helmets to record linear and rotational acceleration. A total of 16,502 impacts were collected over the course of one football season and the data were analyzed as a group and as individual players.

“All hits involve both linear and rotational acceleration, but rotation coveys the idea that your head is pivoting about the neck whereas linear acceleration is experienced from a direct blow in more of a straight line through the center of mass of the head,” Stitzel said.

The median impact for each player ranged from 15.2 to 27.0 g, with an average value of 21.7 g, which shows the wide variability in the force of impacts.

Studies like this are vital to understanding the biomechanical basis of head injuries related to football, Stitzel said. The metric fully captures a player’s exposure over the course of the season and will be used in conjunction with other pre- and post-season evaluations, including MRI and neurological tests conducted as part of this study.

The research team hopes that this work may ultimately improve helmet safety and design to make football a safer sport.

Notes about this neurology and sports concussion research

The study was funded by the Childress Institute for Pediatric Trauma.