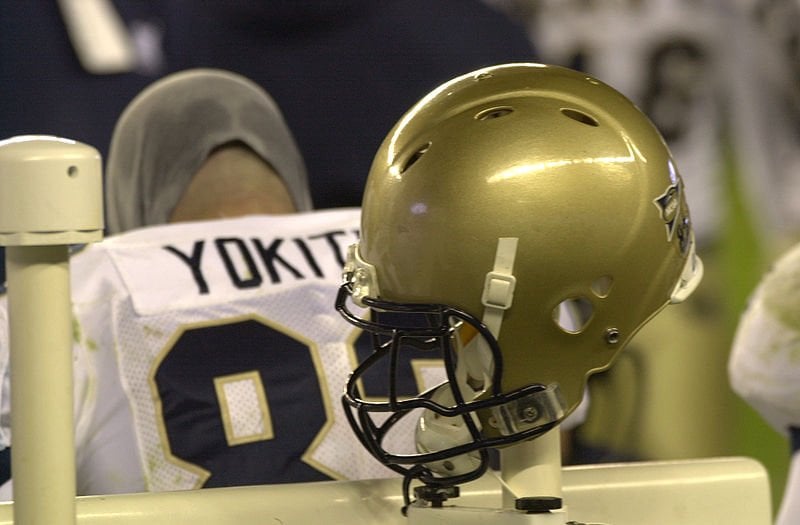 The American Academy of Neurology has released an updated guideline for evaluating and managing atheletes with concussion. New recommendations suggest atheletes be removed from play if a concussion is suspected. The image shows a football helmet designed to minimize the risk for concussion.
Home
Featured

Athletes with Suspected Concussion Should Be Removed from Play

With more than one million athletes now experiencing a concussion each year in the United States, the American Academy of Neurology (AAN) has released an evidence-based guideline for evaluating and managing athletes with concussion. This new guideline replaces the 1997 AAN guideline on the same topic.

The new guideline is published in the journal Neurology, and was developed through an objective evidence-based review of the literature by a multidisciplinary committee of experts and has been endorsed by a broad range of athletic, medical and patient groups.

“Among the most important recommendations the Academy is making is that any athlete suspected of experiencing a concussion immediately be removed from play,” said co-lead guideline author Christopher C. Giza, MD, with the David Geffen School of Medicine and Mattel Children’s Hospital at UCLA and a member of the AAN. “We’ve moved away from the concussion grading systems we first established in 1997 and are now recommending concussion and return to play be assessed in each athlete individually. There is no set timeline for safe return to play.”

The updated guideline recommends athletes with suspected concussion be immediately taken out of the game and not returned until assessed by a licensed health care professional trained in concussion, return to play slowly and only after all acute symptoms are gone. Athletes of high school age and younger with a concussion should be managed more conservatively in regard to return to play, as evidence shows that they take longer to recover than college athletes.

The guideline was developed reviewing all available evidence published through June 2012. These practice recommendations are based on an evaluation of the best available research. In recognition that scientific study and clinical care for sports concussions involves multiple specialties, a broad range of expertise was incorporated in the author panel. To develop this document, the authors spent thousands of work hours locating and analyzing scientific studies. The authors excluded studies that did not provide enough evidence to make recommendations, such as reports on individual patients or expert opinion. At least two authors independently analyzed and graded each study.

According to the guideline:

• An athlete who has a history of one or more concussions is at greater risk for being diagnosed with another concussion.

• The first 10 days after a concussion appears to be the period of greatest risk for being diagnosed with another concussion.

• There is no clear evidence that one type of football helmet can better protect against concussion over another kind of helmet. Helmets should fit properly and be well maintained.

• Licensed health professionals trained in treating concussion should look for ongoing symptoms (especially headache and fogginess), history of concussions and younger age in the athlete. Each of these factors has been linked to a longer recovery after a concussion.

• Risk factors linked to chronic neurobehavioral impairment in professional athletes include prior concussion, longer exposure to the sport and having the ApoE4 gene.

• Concussion is a clinical diagnosis. Symptom checklists, the Standardized Assessment of Concussion (SAC), neuropsychological testing (paper-and-pencil and computerized) and the Balance Error Scoring System may be helpful tools in diagnosing and managing concussions but should not be used alone for making a diagnosis.

Signs and symptoms of a concussion include:

• Headache and sensitivity to light and sound

“If in doubt, sit it out,” said Jeffrey S. Kutcher, MD, with the University of Michigan Medical School in Ann Arbor and a member of the AAN. “Being seen by a trained professional is extremely important after a concussion. If headaches or other symptoms return with the start of exercise, stop the activity and consult a doctor. You only get one brain; treat it well.”

The guideline states that while an athlete should immediately be removed from play following a concussion, there is currently insufficient evidence to support absolute rest after concussion. Activities that do not worsen symptoms and do not pose a risk of repeat concussion may be part of concussion management.