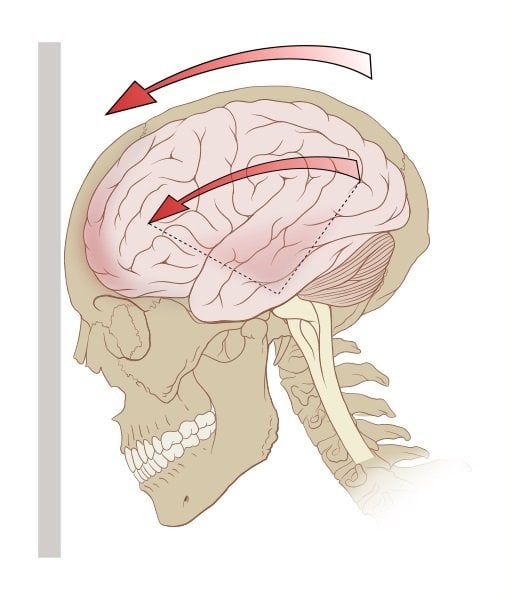 Female participants in the premenstrual/high progesterone group were twice as likely to score in a worse percentile on standardized tests that measure concussion recovery and quality of life, as defined by mobility, self-care, usual activity, pain and emotional health, compared to women in the low progesterone group. The image shows the forces on the brain in concussion.
Home
Featured

For the first time, researchers have documented irregular brain activity within the first 24 hours of a concussive injury, as well as an increased level of brain activity weeks later—suggesting that the brain may compensate for the injury during the recovery time.

The findings are published in the September issue of the Journal of the International Neuropsychological Society.

Thomas Hammeke, PhD, professor of psychiatry and behavioral medicine at the Medical College of Wisconsin, is the lead author. Collaborators at the Cleveland Clinic; St. Mary’s Hospital in Enid, Okl.; the University of North Carolina; Franklin College in Franklin, Ind., and the Marshfield Clinic in Marshfield, Wis., co-authored the paper.

The concussed athletes showed the expected postconcussive symptoms, including decreased reaction time and lowered cognitive abilities. Imaging via fMRI (functional magnetic resonance imaging) showed decreased activity in select regions of the right hemisphere of the brain, which suggests the poor cognitive performance of concussion patients is related to that underactivation of attentional brain circuits.

Seven weeks post-injury, the concussed athletes showed improvement of cognitive abilities and normal reaction time. However, imaging at that time showed the post-concussed athletes had more activation in the brain’s attentional circuits than did the control athletes.

“This hyperactivation may represent a compensatory brain response that mediates recovery,” said Dr. Hammeke. “This is the first study to demonstrate that reversal in activation patterns, and that reversal matches the progression of symptoms from the time of the injury through clinical recovery.”

“Deciding when a concussed player should return to the playing field is currently an inexact science,” said Dr. Stephen Rao, director of the Schey Center for Cognitive Neuroimaging at the Cleveland Clinic and a senior author. “Measuring changes in brain activity during the acute recovery period can provide a scientific basis for making this critical decision.”

Each year, an estimated 3.8 million people sustain a traumatic brain injury (TBI). TBI is a contributing factor to a third of all injury-related deaths in the United States. More than three-quarters of the TBI’s that occur are concussions or other forms of mild TBI, many of which may go undiagnosed.

Notes about this concussion and neuroimaging research