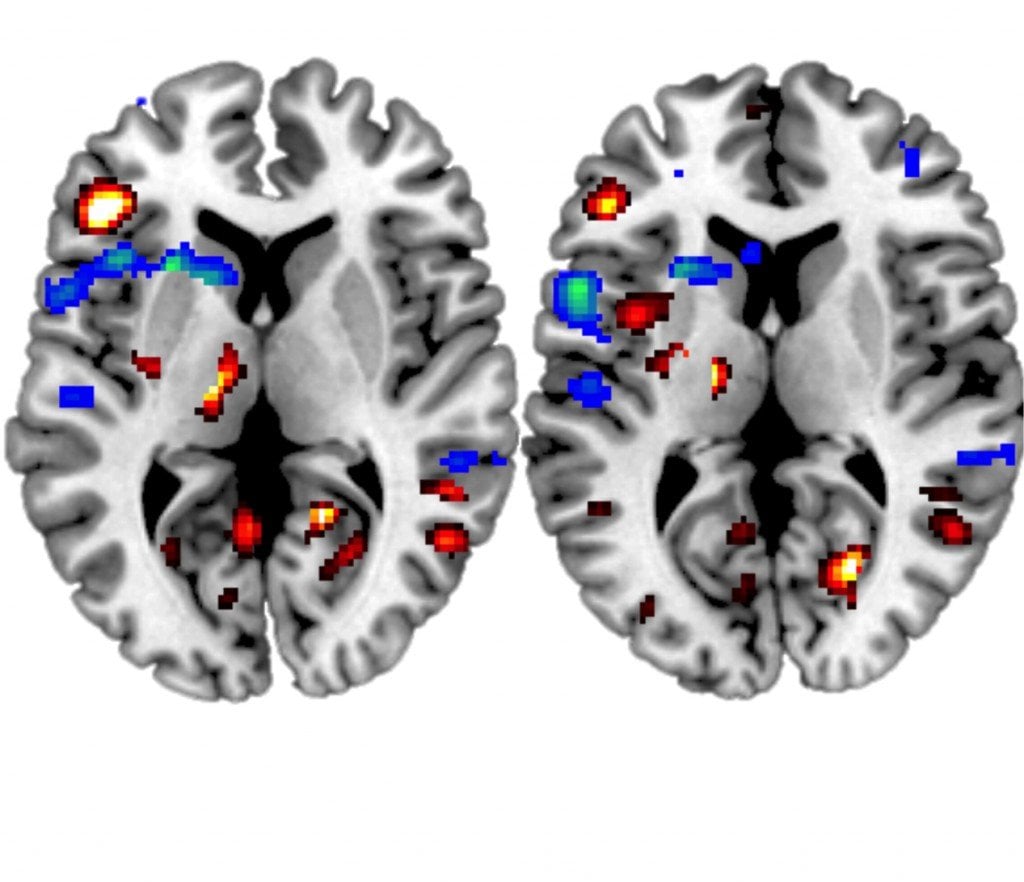 Brain activity imaged by an fMRI while participants with stroke viewed others performing an action. Blue areas show decreased activity (likely where there are lesions caused by a stroke) while red areas show increased activity (thought to be regions of the brain working harder to make up for the damaged regions). Credited to Kathleen Garrison, USC
Home
Featured

Using functional magnetic resonance imaging (fMRI), a team of researchers from USC monitored the brains of 24 individuals — 12 who had suffered strokes and 12 age-matched people who had not — as they watched others performing actions made using the arm and hand that would be difficult for a person who can no longer use their arm due to stroke — actions such as lifting a pencil or flipping a card.

The researchers found that while the typical brain responded to the visual stimulus with activity in cortical motor regions that are generally activated when we watch others perform actions, in the stroke-affected brain, activity was strongest in these regions of the damaged hemisphere and strongest when stroke patients viewed actions they would have the most difficulty performing.

Activating regions near the damaged portion of the brain is like exercising it, building strength that can help it recover to a degree.

“Watching others perform physical tasks leads to activations in motor areas of the damaged hemisphere of the brain after stroke, which is exactly what we’re trying to do in therapy,” said Kathleen Garrison, lead author of a paper on the research. “If we can help drive plasticity in these brain regions, we may be able to help individuals with stroke recover more of the ability to move their arm and hand.”

Garrison, who completed the research while studying at USC and is currently a postdoctoral researcher at the Yale University School of Medicine, worked with Lisa Aziz-Zadeh of the USC Brain and Creativity Institute, based at the USC Dornsife College of Letters, Arts and Sciences, and the Division of Occupational Science and Occupational Therapy; Carolee Winstein, director of the Motor Behavior and Neurorehabilitation Laboratory in the Division of Biokinesiology and Physical Therapy; and former USC doctoral student Sook-Lei Liew and postdoctoral researcher Savio Wong.

Their research was posted online ahead of publication by the journal Stroke on June 6.

Using action-observation in stroke rehabilitation has shown promise in early studies, and this study is among the first to explain why it may be effective.

“It’s like you’re priming the pump,” Winstein said. “You’re getting these circuits engaged through the action-observation before they even attempt to move.”

The process is a kind of virtual exercise program for the brain that prepares you for the real exercise that includes the brain and body.

How to Unlock Your Creativity, Even if You See Yourself as a Conventional Thinker

The study also offers support for expanding action-observation as a therapeutic technique, particularly for individuals who have been screened using fMRI and have shown a strong response to it.

“We could make videos of what patients will be doing in therapy and then have them watch it as homework,” Aziz-Zadeh said. “In some cases, it could pave the way for them to do better.”

Notes about this neurology and stroke rehabilitation research