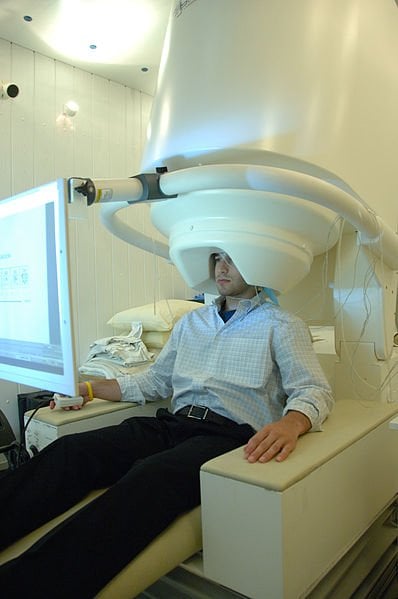 Researchers noted limitations using fMRI scans due to the slowness of the imaging. The fMRI limited observations of activity which changed every 10 seconds. By contrast, the MEG technology detected brain activity at the millisecond level and allowed the researchers to examine wave of activity in frequencies from slow to fast. This image shows a person undergoing a MEG brain scan.
Home
Featured

A boost in the speed of brain scans is unveiling new insights into how brain regions work with each other in cooperative groups called networks.

Scientists at Washington University School of Medicine in St. Louis and the Institute of Technology and Advanced Biomedical Imaging at the University of Chieti, Italy, used the quicker scans to track brain activity in volunteers at rest and while they watched a movie.

“Brain activity occurs in waves that repeat as slowly as once every 10 seconds or as rapidly as once every 50 milliseconds,” said senior researcher Maurizio Corbetta, MD, the Norman J. Stupp Professor of Neurology. “This is our first look at these networks where we could sample activity every 50 milliseconds, as well as track slower activity fluctuations that are more similar to those observed with functional magnetic resonance imaging (fMRI). This analysis performed at rest and while watching a movie provides some interesting and novel insights into how these networks are configured in resting and active brains.”

Understanding how brain networks function is important for better diagnosis and treatment of brain injuries, according to Corbetta.

The study appears online in Neuron.

Researchers know of several resting-state brain networks, which are groups of different brain regions whose activity levels rise and fall in sync when the brain is at rest. Scientists used fMRI to locate and characterize these networks, but the relative slowness of this approach limited their observations to activity that changes every 10 seconds or so. A surprising result from fMRI was that the spatial pattern of activity (or topography) of these brain networks is similar at rest and during tasks.

In contrast, a faster technology called magnetoencephalography (MEG) can detect activity at the millisecond level, letting scientists examine waves of activity in frequencies from slow (0.1-4 cycles per second) to fast (greater than 50 cycles per second).

“Interestingly, even when we looked at much higher temporal resolution, brain networks appear to fluctuate on a relatively slow time scale,” said first author Viviana Betti, PhD, a postdoctoral researcher at Chieti. “However, when the subjects went from resting to watching a movie, the networks appeared to shift the frequency channels in which they operate, suggesting that the brain uses different frequencies for rest and task, much like a radio.”

In the study, the scientists asked one group of volunteers to either rest or watch the movie during brain scans. A second group was asked to watch the movie and look for event boundaries, moments when the plot or characters or other elements of the story changed. They pushed a button when they noticed these changes.