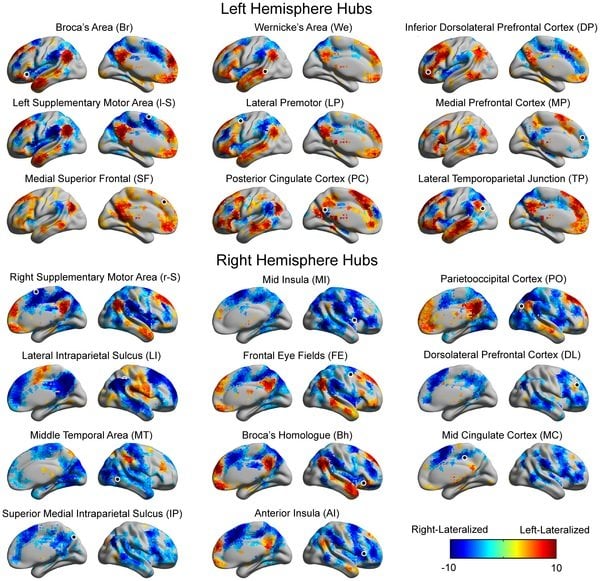 Chances are, you’ve heard the label of being a “right-brained” or “left-brained” thinker. Logical, detail-oriented and analytical? That’s left-brained behavior. Creative, thoughtful and subjective? Your brain’s right side functions stronger —or so long-held assumptions suggest.

But newly released research findings from University of Utah neuroscientists assert that there is no evidence within brain imaging that indicates some people are right-brained or left-brained.

For years in popular culture, the terms left-brained and right-brained have come to refer to personality types, with an assumption that some people use the right side of their brain more, while some use the left side more.

Following a two-year study, University of Utah researchers have debunked that myth through identifying specific networks in the left and right brain that process lateralized functions.

Lateralization of brain function means that there are certain mental processes that are mainly specialized to one of the brain’s left or right hemispheres. During the course of the study, researchers analyzed resting brain scans of 1,011 people between the ages of seven and 29. In each person, they studied functional lateralization of the brain measured for thousands of brain regions —finding no relationship that individuals preferentially use their left -brain network or right- brain network more often.

“It’s absolutely true that some brain functions occur in one or the other side of the brain. Language tends to be on the left, attention more on the right. But people don’t tend to have a stronger left- or right-sided brain network. It seems to be determined more connection by connection, ” said Jeff Anderson, M.D., Ph.D., lead author of the study, which is formally titled “An Evaluation of the Left-Brain vs. Right-Brain Hypothesis with Resting State Functional Connectivity Magnetic Resonance Imaging.” It is published in the journal PLOS ONE this month.

Researchers obtained brain scans for the population they studied from a database called INDI, the International Neuroimaging Data-Sharing Initiative. The participants’ scans were taken during a functional connectivity MRI analysis, meaning a participant laid in a scanner for 5 to 10 minutes while their resting brain activity was analyzed.

By viewing brain activity, scientists can correlate brain activity in one region of the brain compared to another. In the study, researchers broke up the brain into 7,000 regions and examined which regions of the brain were more lateralized. They looked for connections — or all of the possible combinations of brain regions — and added up the number of connections for each brain region that was left- lateralized or right-lateralized. They discovered patterns in brain imaging for why a brain connection might be strongly left- or right-lateralized, said Jared Nielsen, a graduate student in neuroscience who carried out the study as part of his coursework.

“If you have a connection that is strongly left- lateralized, it relates to other strongly lateralized connection only if both sets of connections have a brain region in common,” said Nielsen.

Mapping the Communications Hub of the Brain

Results of the study are groundbreaking, as they may change the way people think about the old right-brain versus left-brain theory, he said.

““Everyone should understand the personality types associated with the terminology ‘left-brained’ and ‘right-brained’ and how they relate to him or her personally; however, we just don’t see patterns where the whole left-brain network is more connected or the whole right-brain network is more connected in some people. It may be that personality types have nothing to do with one hemisphere being more active, stronger, or more connected,” said Nielsen.