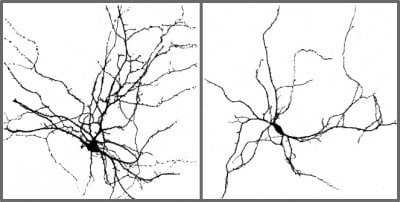 Brain cells called interneurons, which regulate activity in the cerebral cortex, were shown by UCSF researchers to form more complex branching patterns in normal mice (left) in comparison to mice in which the gene encoding the protein Dact1 was knocked out (right). Credited to UCSF.
Home
Featured

Genes Involved in Birth Defects Could Lead to Mental Illness

Gene mutations that cause cell signaling networks to go awry during embryonic development and lead to major birth defects may also cause subtle disruptions in the brain that contribute to psychiatric disorders such as schizophrenia, autism, and bipolar disorder, according to new research by UC San Francisco scientists.

Over the past several years, researchers in the laboratory of psychiatrist Benjamin Cheyette, MD, PhD, have shown that mice with mutations in a gene called Dact1 are born with a range of severe malformations, including some reminiscent of spina bifida in humans.

In a new study designed to explore whether Dact1 mutations exert more nuanced effects in the brain that may lead to mental illness, Cheyette, John Rubenstein, MD, PhD, and colleagues in UCSF’s Nina Ireland Laboratory of Developmental Neurobiology used a genetic technique in mice to selectively delete the Dact1 protein only in interneurons, a group of brain cells that regulates activity in the cerebral cortex, including cognitive and sensory processes. Poor function of interneurons has been implicated in a range of psychiatric conditions.

As reported in the June 24, 2013 online issue of PLOS ONE, when the research team examined these genetically altered interneurons in adult mice, they found that the cells appeared relatively normal and had managed to find their proper position in the brain’s circuitry during development. But the cells had significantly fewer synapses, the sites where communication with neighboring neurons takes place. In additional observations not included in the new paper, the team also noted that the cells’ dendrites, fine extensions that normally form bushy arbors studded with synapses, were poorly developed and sparsely branched.

“When you delete this gene function after initial, early development — just eliminating it in neurons after they’ve formed — they migrate to the right place and their numbers are correct, but their morphology is a little off,” Cheyette said. “And that’s very much in line with the kinds of pathology that people have been able to identify in psychiatric illness. Neurological illnesses tend to be focal, with lesions that you can identify or pathology you can see on an imaging study. Psychiatric illnesses? Not so much. The differences are really subtle and hard to see.”

The Dact1 protein is part of a fundamental biological system known as the Wnt (pronounced “wint”) signaling pathway. Interactions among proteins in the Wnt pathway orchestrate many processes essential to life in animals as diverse as fruit flies, mice, and humans, including the proper development of the immensely complex human nervous system from a single fertilized egg cell.

One way the Wnt pathway manages this task is by maintaining the “polarity” of cells during development, said Cheyette, “a process of sequestering, increasing the concentration of one set of proteins on one side of the cell and a different set of proteins on the other side of the cell.” Polarity is particularly important as precursor cells transform into nerve cells, Cheyette said, because neurons are “the most polarized cells in the body,” with specialized input and output zones that must wind up in the proper spots if the cells are to function normally.

Cheyette said his group is now conducting behavioral experiments with the mice analyzed in the new PLOS ONE paper and with genetically related mouse lines to test whether these mice have behavioral abnormalities in sociability, sensory perception, anxiety, or motivation that resemble symptoms in major psychiatric disorders. He also hopes to collaborate with UCSF colleagues on follow-up experiments to determine whether the activity of neurons lacking Dact1 is impaired in addition to the structural flaws identified in the new study and prior published work from his lab.

Meanwhile, as yet unpublished findings from human genetics research conducted by Cheyette’s group suggest that individuals with autism are significantly more likely than healthy comparison subjects to carry mutations in a Wnt pathway gene called WNT1.

“Just because a gene plays an important role in the embryo doesn’t mean it isn’t also important in the brain later, and might be involved in psychiatric pathology,” said Cheyette. “When these genes are mutated, someone may look fine, develop fine, and have no obvious medical problems at birth, but they may also develop autism in childhood or have a psychotic break in adulthood and develop schizophrenia.”

New Knowledge About the Link Between Infection During Pregnancy and Autism

Rubenstein is the Nina Ireland Distinguished Professor in Child Psychiatry.

Notes about this neurogenetics and psychiatry research

Arguello conducted this research while obtaining her PhD in the UCSF doctoral program in Biomedical Sciences (BMS), and was supported by the Initiative to Maximize Student Development Program of the National Institute of General Medicine, as well as by BMS, the UCSF Department of Psychiatry, and the Center for Neurobiology and Psychiatry led by Sam Barondes, MD, Jeanne and Sanford Robertson Endowed Chair in Neurobiology and Psychiatry.