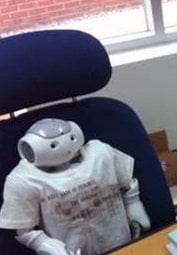 If you tickle a robot, it may not laugh, but you may still consider it humanlike — depending on its role in your life, reports an international group of researchers.

Designers and engineers assign robots specific roles, such as servant, caregiver, assistant or playmate. Researchers found that people expressed more positive feelings toward a robot that would take care of them than toward a robot that needed care.

“For robot designers, this means greater emphasis on role assignments to robots,” said S. Shyam Sundar, Distinguished Professor of Communications at Penn State and co-director of University’s Media Effects Research Laboratory. “How the robot is presented to users can send important signals to users about its helpfulness and intelligence, which can have consequences for how it is received by end users.”

To determine how human perception of a robot changed based on its role, researchers observed 60 interactions between college students and Nao, a social robot developed by Aldebaran Robotics, a French company specializing in humanoid robots.

Each interaction could go one of two ways. The human could help Nao calibrate its eyes, or Nao could examine the human’s eyes like a concerned eye doctor and make suggestions to improve vision.

Participants then filled out a questionnaire about their feelings toward Nao. Researchers used these answers to calculate the robot’s perceived benefit and social presence in both scenarios. They published their results in the current issue of Computers in Human Behavior.

“When (humans) perceive greater benefit from the robot, they are more satisfied in their relationship with it, and even trust it more,” Sundar said. “In addition, we found that when the robot cares for you, it seems to have greater social presence.”

A robot with a strong social presence behaves and interacts like an authentic human, according to Ki Joon Kim, doctoral candidate in the department of interaction science, Sungkyunkwan University, Korea, and lead author of the journal article.

“Social presence is particularly important in human-robot interactions and areas of artificial intelligence because the ultimate goal of designing and interacting with social robots is to provide users with strong feelings of socialness,” said Kim.

The next immediate goal is to confirm these experimental findings in real-life situations where caretaker robots are already working. Examining how other robot roles influence human perception toward them is also important.

“We have just finished collecting data at a local retirement village in State College with the Homemate robot which we brought in from Korea,” said Sundar. “In that study, we are examining differences in user reactions to a robot that is an assistant versus one that is framed as a companion.”

Eunil Park, doctoral student in innovation and technology management, Korea Advanced Institute of Science and Technology, collaborated on this research by programming Nao’s responses to the participants.

The Ministry of Education, Science and Technology, Korea, funded this research.