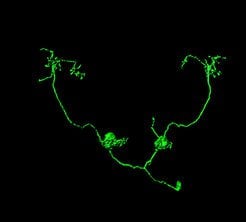 This projection neuron forwards carbon dioxide information to the region in the fly's brain where the animals can gauge internal and external signals. Credited to Purayil & Kadow, Max Planck Institute.
Home
Featured

Different neural circuits process environmental signals depending on the state of satiation.

Hungry people are often difficult to deal with. A good meal can affect more than our mood, it can also influence our willingness to take risks. This phenomenon is also apparent across a very diverse range of species in the animal kingdom. Experiments conducted on the fruit fly, Drosophila, by scientists at the Max Planck Institute of Neurobiology in Martinsried have shown that hunger not only modifies behaviour, but also changes pathways in the brain.

Animal behaviour is radically affected by the availability and amount of food. Studies prove that the willingness of many animals to take risks increases or declines depending on whether the animal is hungry or full. For example, a predator only hunts more dangerous prey when it is close to starvation. This behaviour has also been documented in humans in recent years: one study showed that hungry subjects took significantly more financial risks than their sated colleagues.

Also the fruit fly, Drosophila, changes its behaviour depending on its nutritional state. The animals usually perceive even low quantities of carbon dioxide to be a sign of danger and opt to take flight. However, rotting fruit and plants – the flies’ main sources of food – also release carbon dioxide. Neurobiologists in Martinsried have now discovered how the brain deals with this constant conflict in deciding between a hazardous substance and a potential food source taking advantage of the fly as a great genetic model organism for circuit neuroscience.

In various experiments, the scientists presented the flies with environments containing carbon dioxide or a mix of carbon dioxide and the smell of food. It emerged that hungry flies overcame their aversion to carbon dioxide significantly faster than fed flies – if there was a smell of food in the environment at the same time. Facing the prospect of food, hungry animals are therefore significantly more willing to take risks than sated flies. But how does the brain manage to decide between these options?

Avoiding carbon dioxide is an innate behaviour and should therefore be generated outside the mushroom body in the fly’s brain: previously, the nerve cells in the mushroom body were linked only with learning and behaviour patterns that are based on learned associations. However, when the scientists temporarily disabled these nerve cells, hungry flies no longer showed any reaction whatsoever to carbon dioxide. The behaviour of fed flies, on the other hand, remained the same: they avoided the carbon dioxide.

Why Whales Don’t Get Brain Damage When They Swim

The results show that the innate flight response to carbon dioxide in fruit flies is controlled by two parallel neural circuits, depending on how satiated the animals are. “If the fly is hungry, it will no longer rely on the ‘direct line’ but will use brain centres to gauge internal and external signals and reach a balanced decision,” explains Grunwald-Kadow. “It is fascinating to see the extent to which metabolic processes and hunger affect the processing systems in the brain,” she adds.

Notes about this hunger and risk perception research